Judging Your Transaction Banks: Is It Time for Change? 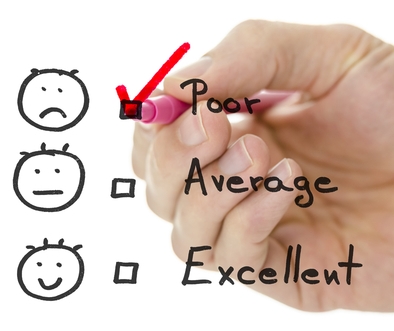 “You just don’t get me,” one’s romantic partner may sometimes say. Apparently, some CFOs and treasurers think the same thing about their banking partners, too.
Since 2004, banking market research firm East & Partners has been conducting twice-a-year surveys of top finance executives of the largest 100 companies by revenues in each of ten Asia Pacific countries (excluding Japan and Australia) – for a total universe of 1,000 companies. One of the questions asked measures the customer’s level of satisfaction with how well the bank understands the company’s business.
At 1.12 points, satisfaction is highest with J.P. Morgan, according to the May 2013 Asian Institutional Transaction Banking Markets report (1.0 = satisfied to 5.0 = dissatisfied). Standard Chartered Bank is second at 1.23, followed by Bank of America Merrill Lynch at 1.26.
Bringing up the rear is Bank of China, at 2.7, and Citi at 2.3. Those numbers are not anywhere near the ‘dissatisfied’ level – they can be said to be closer to neutral – but Citi’s score is surprising given that it is among the Big Three transaction banks in Asia, the other two being Standard Chartered and HSBC (satisfaction rating: 1.7).
Citi was rated 1.98 on understanding the customer’s business in 2007, meaning that its rating on this attribute has deteriorated by 0.32 of a point, notes Martin Smith, Senior Markets Analyst at East & Partners. Other banks have done better, particularly Singapore institution DBS (satisfaction rating: 1.4) and Hong Kong's Hang Seng (2.17), both of whose satisfaction ratings have improved by more than 0.3 of a point over the same period.
Know Your Customer
What does this mean for CFOs and treasurers? Knowing how satisfied Asia’s top 1,000 companies are with the services of their transaction bankers in Asia is helpful when deciding the financial institution to hire (or retain) as primary banking partner, and those that can best function as the company’s secondary banking partner or partners.
Below are the complete ratings on the attribute of knowing the customer’s business and the improvement or deterioration in level of satisfaction from 2007:
Satisfaction Ratings: Understanding of Customer’s Business
(1.0 = satisfied; 5.0 = dissatisfied) 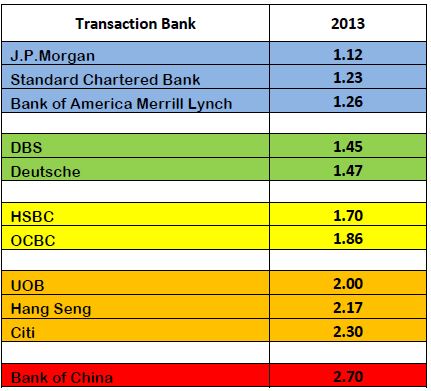 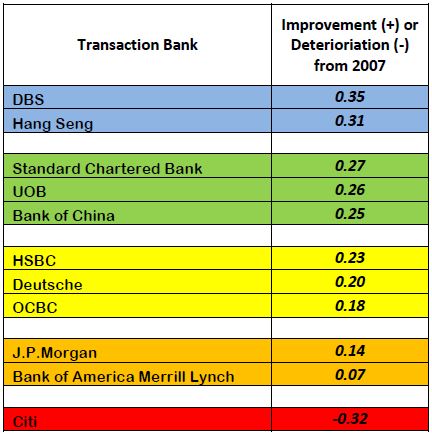 Sources: East & Partners, CFO Innovation
Satisfaction With Asia’s Banks
The East & Partners survey actually measures customer satisfaction with Asia’s transaction banks on 36 attributes, ranging from satisfaction with account and transaction facilities to liquidity management to processing speed to value-for-money to quality of overall advice to quality of overall service delivery.
Citi is not doing too badly overall. “In terms of overall satisfaction ratings, Standard Chartered currently ranks the highest with 1.26, followed by HSBC (1.71) and Citi (1.93),” Smith notes.
Citi achieves a high satisfaction rating for transaction processing speed (1.25), narrowly behind HSBC (1.22) and Standard Chartered (1.21), in addition to a very strong electronic service delivery offering (1.1) and the most useful website (1.14).
“However, in overall terms, Citi is negatively affected by below-average satisfaction ratings for customer support (2.25), professional competence (2.30), response time on queries (2.32), credit approval turnaround times (2.53), value for money (2.34) and understanding of customers business (2.30),” says Smith.
Despite its below-average satisfaction scores on some measures, Citi still managed to remain the third largest in terms of market share among institutions identified by the survey respondent as their primary transaction banker. However, its 12.1% share is 2.3 points smaller than in 2004 – whereas market leader Standard Chartered managed to increase its lead by 5.1 points to 21.2% while HSBC grew half-a-point larger to 19.3% to retain second place.
Current Primary Transaction Banker 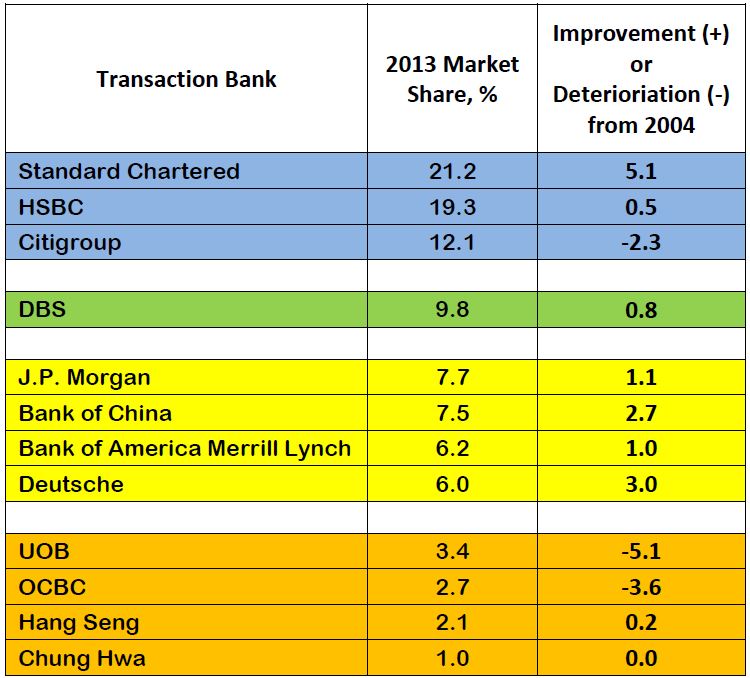 Sources: Asian Institutional Transaction Banking Markets: Markets Analysis Report May 2013, CFO Innovation
It may be slipping as a primary bank, but Citi managed to increase its market share among Asia’s largest enterprises as a secondary transaction banker – 7.4 points to 16.4%, for the top spot, followed by Standard Chartered at 12.8% and Bank of China (9.6%) and HSBC (9.5%) essentially tied for the third spot.
Current Secondary Transaction Banker 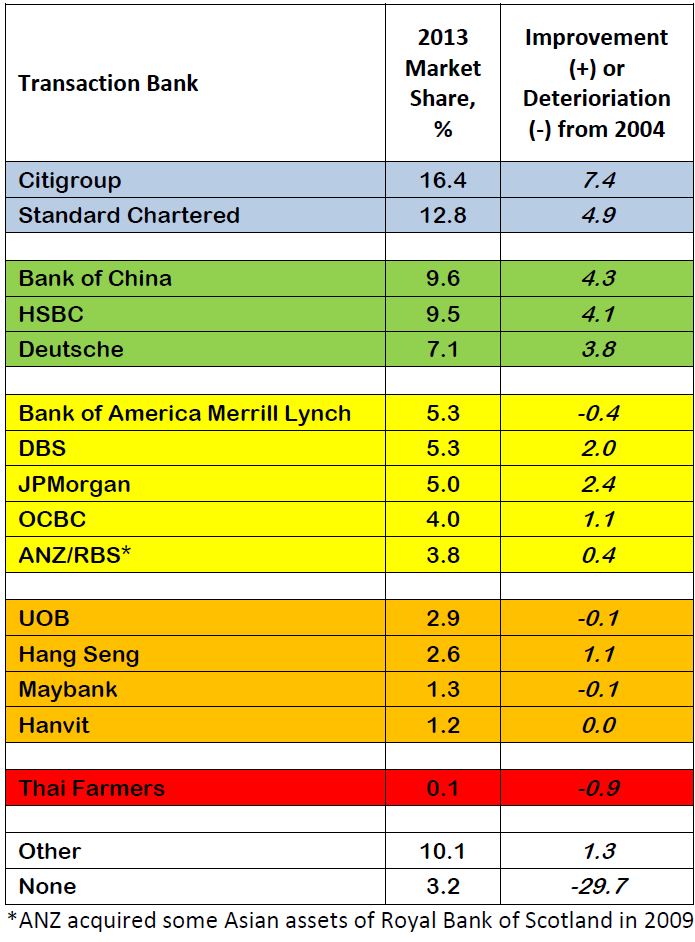 Sources: Asian Institutional Transaction Banking Markets: Markets Analysis Report May 2013, CFO Innovation
The Australian Factor
Interestingly, the latest East & Partners survey finds that more of Asia’s largest enterprises have engaged a secondary banker or bankers, in addition to their primary banker – only 3.2% of respondents now say their company does not have a secondary banker, compared with 32.9% in 2004.
The wallet share of secondary bankers has likewise increased, to 24.4% today from only 10.7% in 2004. “But primary wallet share has really dropped from 80% [in 2004] down to now around 57%,” reports Smith. “The big banks are finding it harder to bank away all their customers’ business; some customers are taking a multi-bank approach.”
A development that should be interesting to Asia’s CFOs and treasurers is the trend of “smaller entrants really starting to get a foothold,” the Sydney-based analyst adds, referring to Australian banks making a foray to the region.
“ANZ is starting to get some traction,” says Smith. “Their actual market share [as a secondary banker] has risen from around 2% [in 2004] to almost 4% today.” Equally interesting, ANZ’s wallet share as a secondary banker has more than doubled from 8.2% in 2004 to 18.9% today. “So they’re starting to get more from the Asian customers they’re doing business with.”
Australia’s third-largest bank by market capitalization, ANZ (Australia New Zealand Banking Group) spent US$550 million in 2009 to buy the assets of the UK’s troubled Royal Bank of Scotland in Hong Kong, Indonesia, Philippines, Singapore, Taiwan and Vietnam. The biggest bank, CBA (Commonwealth Bank of Australia), No. 2 Westpac and fourth-largest NAB (National Australia Bank) are not as aggressive, but they too are expanding in Asia, particularly China and Indonesia.
“ANZ is taking a super-regional approach, with a quite ambitious target of 25% to 30% of their revenue solely derived from Asia,” says Smith. “They’re pulling out all the stops to effectively achieve that.” That may include offering customers relaxed debt covenants and security requirements, which the East & Partners research finds is considered by respondents as the single most important initiative that a transaction bank can launch to improve quality of service.
“The Australian banks are some of the most profitable in the world,” says Smith. “From that point of view, they are well established and hence well-capitalized” – attributes that allow a level of liquidity necessary to permit easier debt covenants and security requirements.
“It’s also a question of technology,” he adds. “CBA is very strong about some of the investments they’ve made in transaction banking technology products like Kaching and iPhone apps.”
Exciting Times
“The report highlights the fact that businesses are not getting good enough service at the institutional level,” says Smith. “Those banks that aren’t aware of and aren’t willing to take this onboard – this will be to their detriment. And this is an area where Australian banks can capitalize on if the Big Three [Standard Chartered, HSBC and Citi] are overlooking that.”
Don’t forget DBS, Hang Seng, UOB, OCBC and J.P. Morgan, all of which have seen improvements in satisfaction ratings on the attribute of ‘closer understanding of customer’s business’ (which incidentally is voted the second single most important initiative a bank can make to improve quality of service, after easier debt covenants).
These are exciting times for Asia’s CFOs and treasurers. New entrants and improving service by second-tier banks are shaking up the established leaders. Competition is always good for the end-user.
With luck, you might end up with transaction bankers that provide faster, more accurate and higher quality service at lower overall costs – and you may not even need to change your current providers. Just hinting you are contemplating a move might motivate them to do much better.
About the Author