Jing-Jin-Ji: The Chinese Super-City You Have Probably Never Heard Of 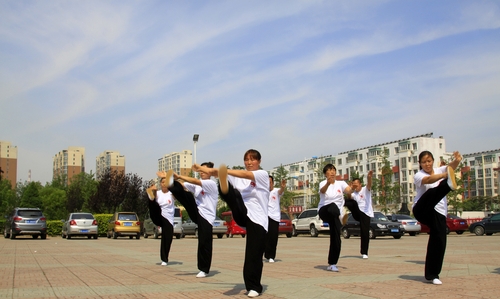 On June 23, the General Administration of Customs (GAC) released an announcement on integrating the customs procedures of Beijing, Tianjin, and Hebei (GAC Announcement [2014] No. 45), marking an important milestone in the integration of the three jurisdictions into a single “mega-region” in China’s northeast.

Under the integrated customs system, enterprises established in any of the three jurisdictions can choose between importing/exporting goods via the Customs of their original business registration or, alternatively, the Customs through which the goods are actually shipped.

The integrated system came into effect in Beijing and Tianjin on July 1, 2014 and will begin in Shijiazhuang, Hebei province, on October 1, 2014.

The Jing-Jin-Ji region, part of the larger Bohai Bay economic zone, will be China’s third mega-region, following the success of the Yangtze River Delta and the Pearl River Delta

This is just the latest in a series of measures announced by the National Development and Reform Commission (NDRC) towards the realization of the Beijing-Tianjin-Hebei mega-region, covering 216,000 square kilometers and home to more than 100 million people.

Ultimately, the Chinese leadership has plans to create 10 mega-regions around the country, including inland areas such as Shandong and Liaoning.

As the consequences of decades of high-speed economic growth begin to catch up with the world’s most populous country, China is looking to the mega-region as its prime model for sustainable growth in the future.

Analysts have identified the so-called Jing-Jin-Ji (an abbreviation of the Chinese names of Beijing, Tianjin, and Hebei) unification plan as both an economic as well as political move. Proponents dub it as a cure-all for China’s acute problems of environmental pollution, overcrowding, water-shortage and uneven development.

In fact, the idea for Jing-Jin-Ji regional integration has been floated by Chinese politicians for many years, though progress has been slow. Interest in the project picked up this year following a call in February by Chinese President Xi Jinping for the integrated and coordinated development of the region around Beijing.

Three months later, the NDRC announced that plans would soon be released for the mega-region, a decade after work on the project was first begun in 2004.

According to the plan, Beijing will reorganize its industry structure and divert some of its population to neighboring cities (i.e., Hebei and Tianjin) to ease population pressure in the capital. A Beijing-Tianjin-Hebei Free Trade Zone (FTZ) was also rumored to be in the works, though this is likely now on hold following a blanket suspension of additional FTZs in China.

Next, on June 26, the Hebei Provincial Office of Traffic and Transport announced that the “Beijing Seventh Ring Road” will soon be completed in 2015.

The first step toward building an integrated regional transportation network, the 940-km ring road will run through the Hebei cities of Langfang, Zhangjiakou and Chengde, among others.

It will also serve as a corridor joining the province to Beijing, where it is expected to partially alleviate traffic congestion and help disperse the emission of atmospheric particulate matter, considered the deadliest form of air pollution.

The Jing-Jin-Ji region, part of the larger Bohai Bay economic zone, will be China’s third mega-region, following the success of the Yangtze River Delta (YRD) and the Pearl River Delta (PRD). The former, centered on Shanghai and spanning across Zhejiang and Jiangsu provinces, is the largest mega-region in the world, with a population of 156 million in 2010.

In the past decade, the Yangtze River Delta has been at the forefront of China’s economic growth, led by Shanghai’s booming finance sector and large inflows of foreign direct investment into second-tier cities like Suzhou.

One of the earliest regions in China to open up to foreign trade under Premier Deng Xiaoping, the PDR was the original driver of explosive growth in the Chinese economy, though this has slowed in recent years.

An expanded version of the region, including Hong Kong and Macau, was estimated to be home to 120 million people in 2010. 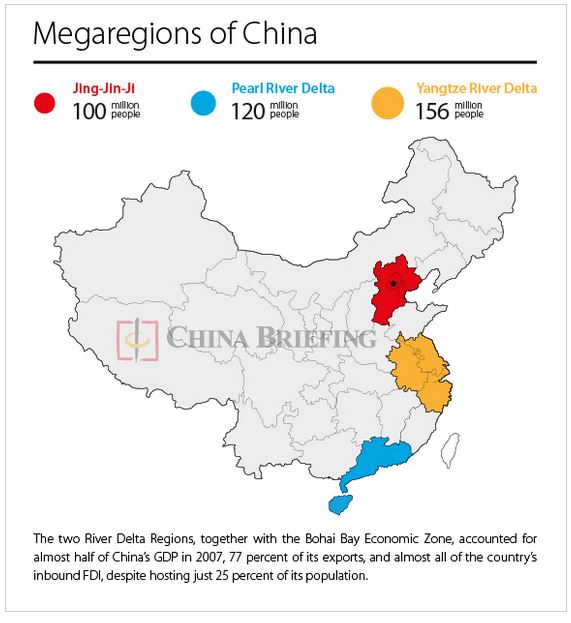 The two River Deltas, together with the Bohai Bay economic zone, accounted for almost half of China’s GDP in 2007, 77% of its exports, and almost all of the country’s foreign direct investment, despite hosting just 25% of its population.

Building on the experiences of its predecessors, the Jing-Jin-Ji plan hopes to take regional integration one step further, establishing not just an economic heavyweight, but a unified cultural and political center.

Many challenges remain, however, for achieving these goals. But this early, local and foreign companies alike will do well to track and plan for the possibilities in Jing-Jin-Ji.

Dezan Shira & Associates, a specialist foreign direct investment practice that provides advisory services to multinationals investing in emerging Asia. This article was first published in China Briefing and was reedited for clarity and conciseness. For further details or to contact the firm, please visit www.dezshira.com.