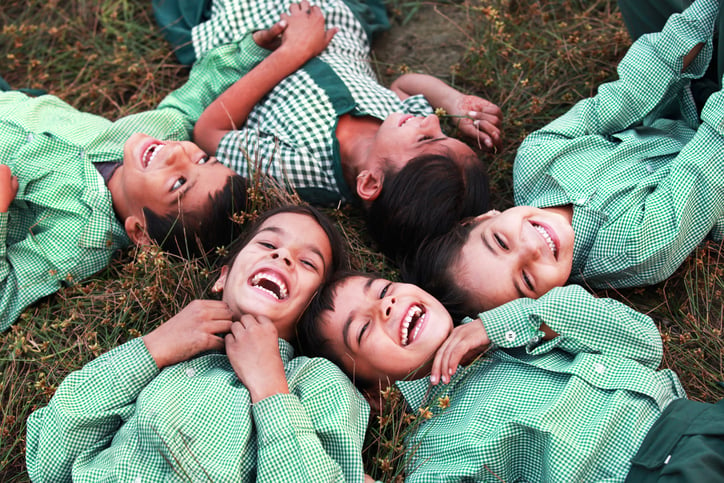 After the recent victories of the ruling Bharatiya Janata Party (BJP) in state elections and in the uphill battle to amend the constitution for the approval of the Goods and Services Tax (GST), Prime Minister Narendra Modi’s reform project has regained steam.

In this report, we review the economic policy strategy Modi unveiled before sweeping to power in 2014 and evaluate his achievements so far.

The government has taken some steps in attracting FDI, simplifying the tax regime and slimming the size of the informal economy. Nonetheless, there is seemingly no advancement in the ‘Made in India’ program, which aims to lift the share of manufacturing to 25% of GDP by 2022

Modi and the Bharatiya Janata Party (BJP) made a list of promises in the election manifesto. Some of the key themes, as far as the economic program is concerned, are:

1) Made in India, which aims to lift the share of labor-intensive manufacturing in GDP

3) Broadening the tax base to fund other government expenditures

5) Decrease the importance of informal economy

The table below shows the key points of Modi’s economic program made public in the 2014 election and the progress made thus far. 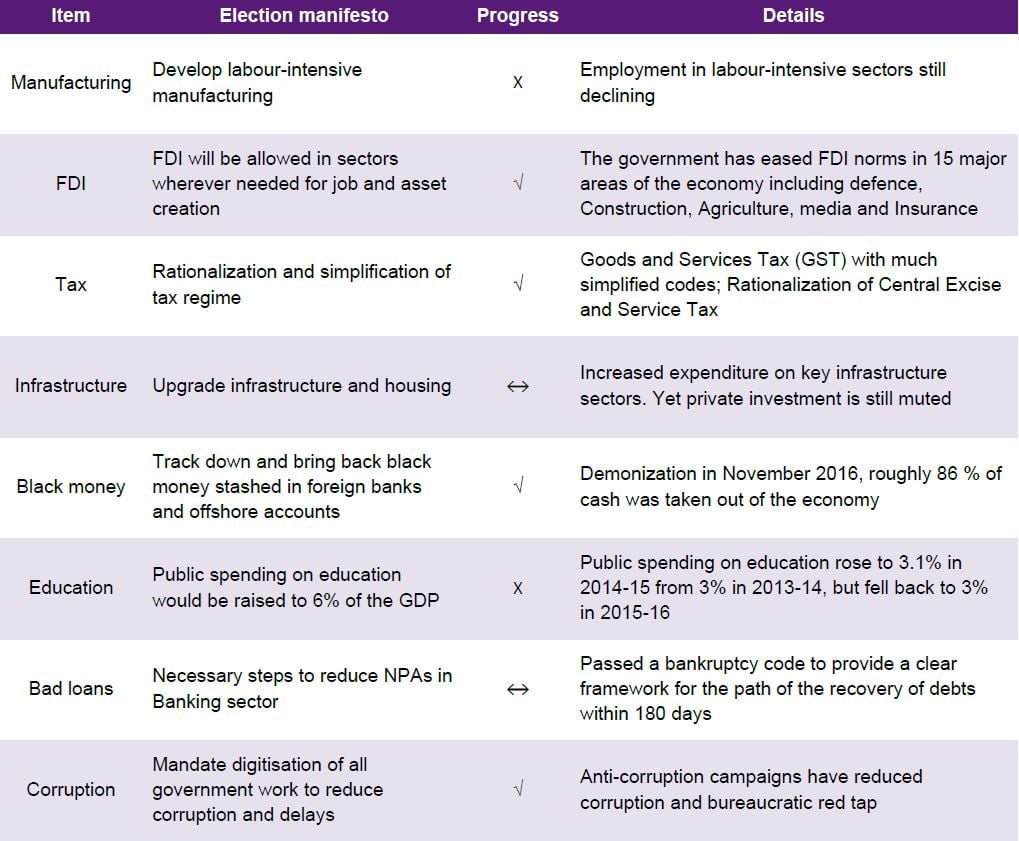 Among the five key economic goals listed above, the government has taken some steps in attracting FDI, simplifying the tax regime, and slimming the size of the informal economy by demonetizing 86% of the currency, a drastic move that caused disruption that is now seemingly tapering off.

The endeavor to upgrade infrastructure investment was boosted by the new bankruptcy code, which should help build a better credit market structure in the long run that is less reliant on bank loans.

A more sophisticated production chain demands higher skilled workers who can adapt to new technologies. It is hard to argue that India is well-placed for this trend

The question really is whether it is too late for India to start developing its manufacturing sector at a time when the world is moving towards automation and artificial intelligence in production processes.

One may argue that the FDI relaxation has already made India a more favorable place for investment. Modi has asserted that India is “the most open economy in the world” for foreign capital. Indeed, in 2016, US$47 billion in foreign direct investment flowed into India, the highest level in its history (see chart below). 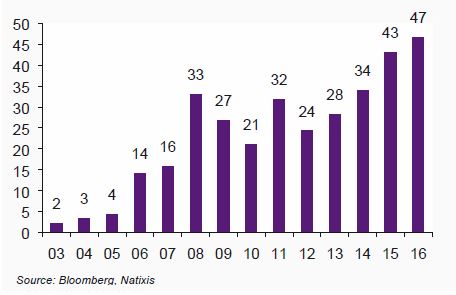 Nevertheless, let’s not forget the other side of the coin. Overseas producers, usually larger in size and with more sophisticated technology, are increasingly resorting to automation and/or artificial intelligence across an array of plants (automobile, for example).

This is reducing demand for manufacturing employment. A more sophisticated production chain demands higher skilled workers who can adapt to new technologies. It is hard to argue that India is well-placed for this trend.

In the immediate future, India’s relative scarcity of relevant free trade agreements is not helping. The Trans-Pacific Partnership’s high threshold had been a hindrance to Indian membership, but the viability of that FTA is now in doubt after the withdrawal of the United States.

FTAAP – the Free Trade Area of the Asia-Pacific – should be a good fit for India’s profile (see chart below). Missing out from the 21-strong FTAAP could undermine India’s integration with the production network and value chain in East Asia (Taiwan) and the east coast of the Pacific (e.g. Peru, Chile, Canada). 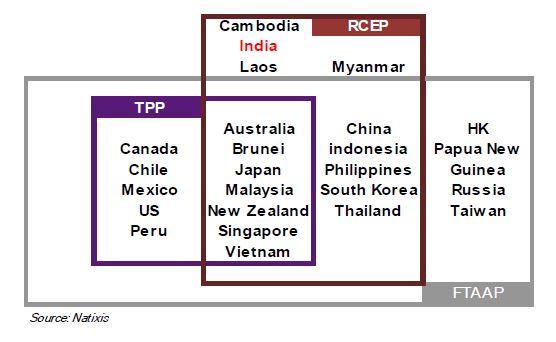 It seems clear that India needs to play the cooperative game in international trade in order not to further lose competitiveness in exports. Worse still, its endeavors to boost manufactured exports are being made at a time when the new paradigm of trade is placing more emphasis on services (see chart below). 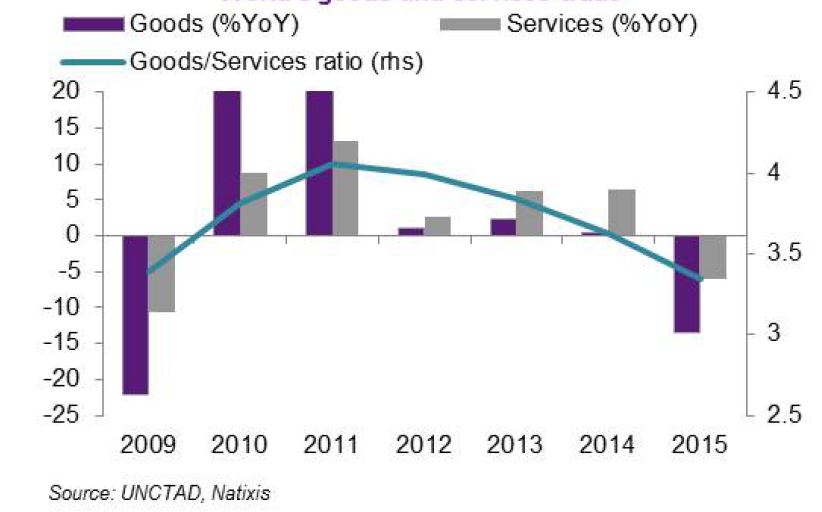 In face of all the aforementioned challenges, the next question would be: Is Made in India doomed to fail?

Admittedly, automation and India’s lack of relevant trade agreements do not help. Yet the demographic structure is in a sweet spot over the coming decades as the dependency ratio is very low and the share of working-age people in the total population is set to continue growing.

Modi pledged to raise government spending on education to 6% of GDP. So far, the ratio has been only at around 3%

Indeed, according to data from the United Nations, India will remain in this population sweet spot until around 2050, when the working population number is forecast to peak.

Still, merely having a young population is not enough in a world of automation and artificial intelligence. Clearly, more and better education is needed to increase workers’ productivity and ability to cope with a more advanced production line.

Modi, in his 2014 manifesto, pledged to raise government spending on education to 6% of GDP. So far, the ratio has been only at around 3% since his inauguration.

We believe that India has been quite successful in some reforms, namely on FDI, taxation and downsizing the informal economy. However, the ambitious Made in India plan has not gone too far and probably will not do so unless decisive action is taken to invest in education and innovation.

Even if India were to decide to leapfrog its development model from a focus on manufacturing to services, education would still be needed to achieve that due to its lack of a competitive edge. As he looks for more political victories, there is no better plan for Modi than education.

Natixis is the second-largest banking group in France. This article excerpted from Asia Hot Topics, which was issued on 27 March 2017, and was re-edited for clarity and conciseness.