In 2000, movie and video game rental provider Blockbuster declined the chance to take over streaming online service Netflix for US$50 million. Eight years later, Blockbuster filed for bankruptcy. In the meantime, Netflix was growing by leaps and bounds. Last year, it reported net income of US$122.6 million on revenues of US$6.8 billion. Netflix now bills itself as the world’s leading Internet television network with more than 75 million members in over 190 countries.

This just goes to show that incumbent large companies are destined to give way to more nimble and technologically savvy start-ups, right? After all, as economist Mark Perry points out, almost 88% of American companies in the Fortune 500 in 1955 had disappeared from the same list in 2014 – “gone bankrupt, merged or still exist but have fallen from the top Fortune 500 companies.”

“Big corporations are slow, dumb dinosaurs waiting to be ‘disrupted,’ but the reality is not so simple”

So if you’re the CFO of a ‘dinosaur’ incumbent right now, or you’re an up-and-coming finance executive of one, you better take a long hard look at the huge number of start-ups that pop up all the time right in your backyard – and see whether you can join them.

Or else, as adviser to the CEO and the board and business partner to others in the C-suite, you can use your fluency with numbers to initiate discussions on the way forward and/or lend the finance organization’s support to those in the organization pushing for engagement with the upstarts. You don’t have to turn your back on them, as Blockbuster did with Netflix.

A new study by business school INSEAD and venture capital firm 500 Startups, #500 Corporations: How do the World’s Biggest Companies Deal with the Startup Revolution?, suggests that the lessons of Blockbuster are being learned. “Big corporations are slow, dumb dinosaurs waiting to be ‘disrupted,’ but the reality is not so simple,” says Khailee Ng, Managing Partner of 500 Startups.

“Yes, the 'dinosaur' label is catchy, but it ignores the fact that these corporations sit on more cash reserves than most venture capitalists will ever have,” Ng writes. “Maybe there are just not enough stories of corporate + startup collaborations thundering through mainstream consciousness. Or perhaps corporations who are doing all the right things simply don't want you to know about it.”

What INSEAD and 500 Startups did was comb through the top 500 companies in the Forbes Global 2000 ranking of the world’s 2,000 largest public companies (by revenue) from China to Japan to the United States. They found that a majority of the top 500 (52.4%) “are working with startups in one way or another,” especially the so-called unicorns – startups valued at US$1 billion or more based on their fund-raising.

“There is a strong correlation between the rank of the corporation and the engagement with startups,” notes the report – the smaller the revenue, the weaker the engagement rate.

Five of the industries that are represented by at least 10 companies in the top 500 stand out for being strongly engaged with startups:

There are fewer than 10 companies representing semiconductors and computer services, but all of them engage with startups (for example Samsung Electronics, Taiwan Semiconductor, Tencent Holdings, IBM, Google and Facebook). Seven of the eight beverage companies in the top 500 are engaged, including Coca-Cola and PepsiCo.

You can choose to start small. However, “if you don’t shoot for big enough wins from the get go, there may not be enough to show to get you more resources”

How are corporations doing it? The most common channel is corporate venture capital (62.6% of the cases), followed by startup competition (29%), and setting up accelerators and incubators (24.4%).

There are seven main ways to engage, according to the report (see chart below):

A Swiss Knife of Possibilities
Ways to Engage With Startups 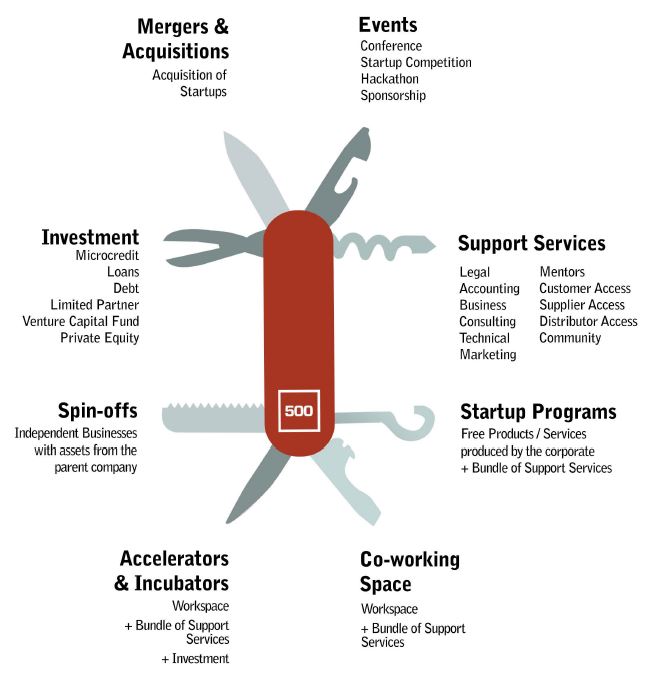 Five of the eight Swiss knife attachments are particularly interesting:

Mergers and Acquisitions. This is obviously the most costly and risky of the options, and requires the highest level of involvement – factors that Blockbuster had surely considered in 2000 and decided outweighed the potential investment return. “This category also includes acqui-hires, whereby an acquisition is done to acquire the team instead of the product/service,” notes the report.

Spin-offs. The company injects assets into a start-up in the hope that a more agile and entrepreneurial management would be able to grow it into a viable new business. This is different from financial engineering to unlock value for shareholders or get rid of underperforming parts of the company, such as IBM’s decision to spin off its PC business.

Corporate Investment. This route is marginally less costly but slightly more risky than M&A because the company has less visibility and control into the startup (since the investment typically is too small to grant it a board seat). But like M&A, it requires a lengthy time frame on the part of the corporate to realize value.

The company could be investing for financial reasons, betting on a big payday in the future like those who put money early in Google and Facebook. More commonly, corporate investment is done for strategic reasons, with the goal of eventually integrating a supplier, customer or competitor, or diversifying the company’s current portfolio.

The investment channels range from extending microcredit and loans to setting up your own venture capital unit or private equity arm.

Look for “the right partners to share the knowledge and minimize the risk.” And be prepared to work at the speed of the startups. “Don’t keep them waiting on you”

Startup Programs. INSEAD and 500 Startups call these programs “potentially one of the best ways to work at a very early stage with startups that could be a significant customer tomorrow.” In this model, startups are given access to a free package of the corporate’s support services and products. For example, Paypal waives fees for transaction volumes of up to US$1.5 million for startups it is helping grow.

Accelerator/Incubator. Examples of this include Samsung Accelerator and Accenture’s Fintech Innovation Lab. In this model, the incumbent offers “founding help, space and mentoring in exchange for equity.” This type of engagement is less risky and costly than M&A or investment, but requires more involvement than a startup program – and a long time-frame similar to M&A and investment.

Which Road to Take?

Which model should you, as CFO, champion within the organization? It depends on where you are in the process, counsels INSEAD. The approach of the world’s top 500 public companies typically evolved over three phases: 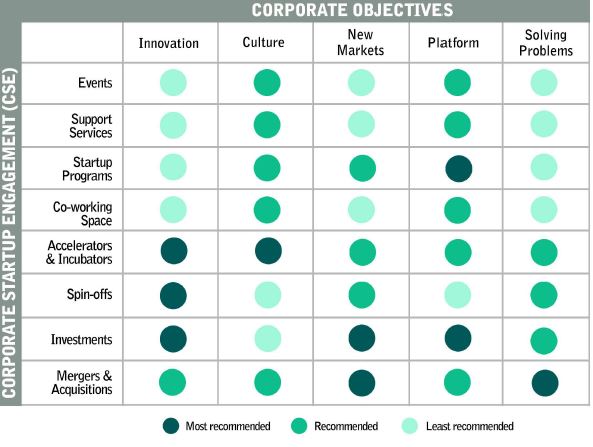 “Talk to a pool of startups about their needs as part of your design process,” the report also advises. Don’t assume ‘they would love this’ – in fact what is on offer from competing incumbents, private equity and venture capitalists is getting more and more competitive.

Never lose sight of your corporate objectives, resources and time frame for results. You can choose to start small, choosing one channel of engagement at a time. However, warns the report, “if you don’t shoot for big enough wins from the get go, there may not be enough to show to get you more resources.”

Doing it alone can be scary, says the report, so look for “the right partners to share the knowledge and minimize the risk.” And be prepared to work at the speed of the startups. “Don’t keep them waiting on you.”

Startups can offer incumbents speed of operation, innovations, a more agile business culture and a modern brand image. In turn, established companies cab lend credibility, distribution, access to suppliers, and funding – six out of ten of the 146 unicorns listed in the Wall Street Journal’s Billion Dollar Startup Club have raised money from at least one corporation (not counting investment firms like Goldman Sachs).

For today’s incumbent companies and their CFOs, there are more reasons to work with startups than to stay away from them -- or to try and kill them off.