More billionaires are born in Hong Kong than in any other city throughout Asia, reveals WealthInsigt and Spear's Magazine.

More than one in 100 of the world’s billionaire population were born in Hong Kong (1.01 per cent), according to an analysis based on WealthInsight’s proprietary database of over 100,000 HNWIs worldwide.

Millionaires - otherwise known as “high net worth individuals” or “HNWIs” refer to individuals with net assets of US$1 million or more excluding their primary residences.

Billionaires are HNWIs with a wealth of US$1 billion or more, including equities, bonds, cash and deposits, fixed-income products, real estate (excluding primary residence), alternative assets and business interests.

Although the global spread of billionaires’ birthplaces is vast, the research revealed a number of key statistics about where the planet’s richest are born.

“Prosperous as it was under British rule, Hong Kong’s economic clout has only grown in recent years, suggesting that in years to come more billionaires will emerge from this semi-autonomous city," says WealthInsight Analyst Oliver Williams. "Whether or not they will stay depends largely on political evolutions as much as economic.”

"When a city is as pre-eminent a financial capital as Hong Kong, it is a magnet for billionaires," adds Spear’s Editor Josh Spero.

Spero adds that Hong Kong's native billionaires made their money in real estate, manufacturing and luxury goods - but largely not in financial services or 21st century industries. 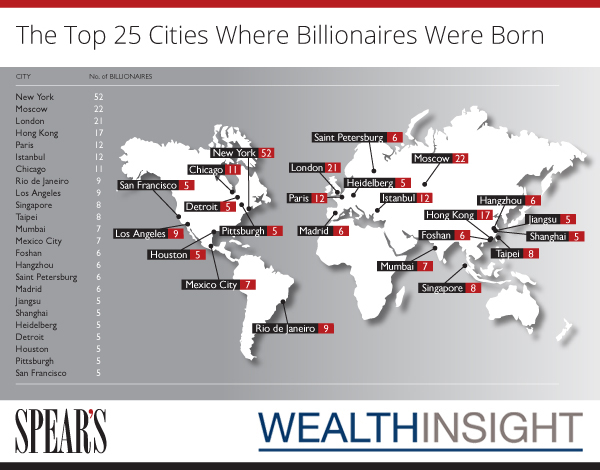