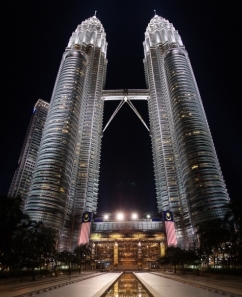 I’ve been working for the last couple of months on a writing project about Islamic finance – and now I’m convinced that it’s a feasible route that Asia’s CFOs can consider to raise money, regardless of whether their company is Muslim or not.

Take GE Capital. The Fortune 500 company issued a US$500-million Islamic bond, known as sukuk, last year. About half of the offering was taken up by Islamic banks, a group to whom GE had never sold its paper before, the company told me. That was one of the goals of the exercise, to diversify beyond the conventional investor base. The bond’s subsequent listing in London, Kuala Lumpur and Dubai further expanded GE’s investor base across new currencies and markets.
Britain’s Tesco Stores and Japan’s Toyota Capital have also issued sukuks, joining a slew of companies in Malaysia, Indonesia and other Muslim countries in Asia. Islamic finance, in other words, is no longer just for Islamic companies. So long as they do not engage in activities that are anathema under Islamic law, such as alcohol, gambling and arms-dealing, non-Islamic companies are free to raise capital from the 1.5-billion strong Islamic world.
Sultan of Sukuk
At least this is the case in Malaysia, which has always promoted Islamic finance alongside conventional finance. It is now the global centre for sukuk issuances, accounting for 45% of the US$24.6 billion of all sukuks issued last year. It is possible to issue a sukuk in Indonesia as well, although that country accounts for less than 2% of the global total. And companies may soon be able to issue Islamic paper in Hong Kong and Singapore, which have announced plans to get in on the game.
Why the surge of interest in Islamic bonds? There’s simply a lot of money sloshing around Islamic pockets as oil prices stay at elevated levels. Management consultant McKinsey estimates that oil producers will generate excess cash of US$628 billion a year beginning in 2012. Muslim countries in the Middle East will account for the bulk of those investable petrodollars, so a large proportion of that money is expected to go to assets deemed compliant with Islamic law.
Malaysia is well-placed to catch a significant part of that overflow. “Its well-established Islamic banking system, strong regulatory framework, and government support have made the country a leading market for sukuk issuance,” says Standard & Poor’s. The credit-rating agency notes that “an increasing number of Asian corporates are looking to tap [the Islamic market] with the hope of lowering funding costs and obtaining much needed funding and liquidity in an otherwise difficult environment.”
As the Sultan of Sukuk, Malaysia is going all out to make things easy for them. In 2006 it established the Malaysia International Islamic Financial Centre (MIFC), which links together all the government agencies and financial and market regulators in one network. In theory, this means that a corporate issuer and its investment bankers need to deal only with the MIFC, which serves in effect as a one-stop shop for sukuks.
What You Need to Know
It’s not that easy in real life, of course. One issuer told me that the structuring, approval and issuance process, even with the MIFC’s assistance, takes longer to complete compared with a conventional bond. In part that’s because the Shariah Council, a consultative body made up of Islamic scholars, has to examine the deal and then issue a ruling on whether or not it complies with Islamic law (known as Shariah).
With time, however, the boundaries of what is and what is not Shariah-compliant are becoming more clearly delineated. Different Muslim countries still have different interpretations of what is and what is not permissible in terms of financial structures under Shariah, but the differences are narrowing. Malaysia’s rulings on sukuk are pretty much accepted in key Islamic finance centres, for example, although I imagine strict constructionists like Sudan can disagree – but then again, the gush of Islamic money does not come from them, but from the oil-rich Gulf countries and strong Asian economies like Malaysia, Brunei and, increasingly, Indonesia.
Still, corporate issuers have to be aware of the various sukuk structures and the potential for problems associated with each one. There are currently three main sukuk structures: 1) ijarah or common leasing transaction, 2) musharakah or joint venture, and 3) murabahah  or cost-plus financing.

In ijarah, the ultimate borrower sells assets such as land, buildings, aircraft and ships to a special-purpose vehicle (SPV), which then issues the sukuk. The SPV rents back the assets to the borrower for a time period that corresponds to the life of the sukuk. The money it gets from the rent is passed on to the sukuk holders, who do not earn interest on the Islamic bond. They get pre-agreed rental payments instead.

In musharakah, the sukuk holders gain access to an income stream based on the profits generated by a joint-venture partnership between the SPV and the ultimate borrower. In murabahah, the sukuk issuer buys goods or commodities and resells them on a deferred cost-plus payment basis. The sukuk investors are paid from the proceeds. All three structures are designed to get around the prohibition against paying interest, which in Islam is equated with usury.
A controversy erupted in late 2007 when Sheikh Taqi Usmani, chairman of the Shariah Board of the AAOIFI (Accounting and Auditing Organization for Islamic Institutions), said that most of sukuk issues in the market do not comply with Shariah. That was a big deal because the majority of Shariah scholars are on the AAOIFI’s Shariah board. The organization itself is backed by central banks and Islamic financial institutions from 40 countries.
Usmani’s objections centred on the guarantee that issuers make to sukuk holders to repurchase the sukuk at face value upon maturity. This practice is tantamount to paying interest, he argued, because the value of the sukuk is determined by the credit-worthiness of the issuer and not the underlying assets of the sukuk. The AAOIFI subsequently issued guidance that the exercise price of the sukuk should be based on the net asset value, market value, cash equivalent value or any price agreed upon at the time of purchase.
The AAOIFI guidance cleared the air and made ijarah the sukuk structure of choice. This was how the GE Capital sukuk was structured (the underlying assets are commercial aircraft) and the recent US$1.25 billion sovereign sukuk issued by the Malaysian government (backed by the sale and leaseback of 12 hospitals). The underlying physical assets in an ijarah sukuk make it easier for the sukuk issuer to value the Islamic bond at the time of purchase.
The Way to Go
With ijarah, companies need to sell actual assets to an SPV, which should not pose too much of a problem for asset-heavy enterprises such as property developers and industrial concerns. On the other hand, corporations that manufacture goods (garments, toys, electronics) and produce commodities (gold miners, oil companies, plantations) can use the murabahah structure, which also allows a valuation to be made at the time of purchase.
The path is more difficult for enterprises with little in the way of marketable assets or physical goods to sell, such as those in services. They may have to dispense with a repurchase guarantee since it is difficult to put a price on the value of a joint partnership at the outset, and this can affect investor interest. A conventional bond, which is based on the creditworthiness of the issuer as assessed by credit-rating agencies, may be the better option for these companies.
Where to issue? Malaysia is keen to defend and even expand market share, so there’s a plethora of tax breaks and perks currently on offer there. Sukuk issuers are exempted from stamp duty, for example, and expenses incurred in the issuance of Islamic securities are tax-deductible until 2015. The SPV is not subject to tax or tax administrative procedures, and issuers are free to repatriate proceeds. They can also choose to denominate their offerings in ringgit or in foreign currencies, such as the U.S. dollar.
The MIFC also promises quick approval for the sukuk to be listed on Bursa Malaysia, the country’s stock exchange – it says the process can take as little as one day. Secondary listings outside Malaysia are allowed. What about pricing? Asian telecom company Binariang GSM, which owns mobile phone networks in Malaysia, India and other Asian countries, says its 2007 sukuk enjoyed “tighter yields” because of the wider investor base.
According to the Wall Street Journal, the yield on GE’s sukuk last year was 1.75 percentage points higher than comparable U.S. Treasurys, which is “only slightly higher than what GE Capital paid [in November 2009] when it issued $1.5 billion of regular five-year bonds, which carried a premium of 1.55 percentage points over Treasurys.” It’s all food for thought for Asia’s CFOs.
About the Author
Cesar Bacani is senior consulting editor at CFO Innovation.
Read more on
capital management bonds