‘In Every Single Case, We Have Achieved Savings of More Than 50 Percent’ 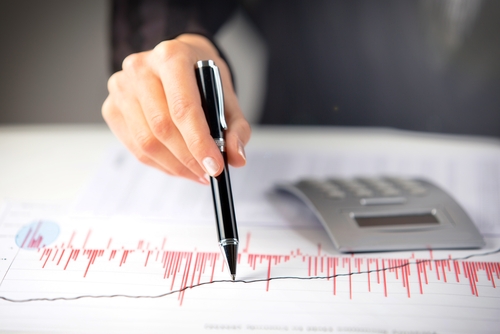 “The companies I have been seeing of late, even the relatively blue-chip companies, are still lower down [the treasury function development curve] than you would expect potentially in Europe, for example,” he says.

Farrar makes the startling claim that PwC has been able to wring out more than 50% of treasury costs out of every engagement. CFO Innovation’s Cesar Bacani grilled him about this and other aspects of his engagements with Asia’s companies. Edited excerpts:

You say that in PwC’s engagements with companies on cash pooling and other liquidity management issues, the outcome has been at least savings of 50% of what they were spending before. How did you manage this?

It depends on the particular company. Within our network, and we’ve done between 50 and a hundred projects across the world, in every single case of those that I’m aware of, we have achieved savings of more than 50%.

The savings come from a number of different areas . . . Some of it has to do with getting better visibility and better forecasting of cash, and therefore being able to repay debt with the initial cash that’s been taken out of various accounts in the region.

Part of it would be pooling-type situations. Often there’s quite a bit that can be done around either cash concentration or interest optimization.

In some countries, it’s very difficult with restrictions on currencies and so on. You can’t necessarily move cash to one location, say Hong Kong or Singapore. But even when you can’t do that, there are interest optimization solutions that many of the banks offer. Quite often, you can have zero balancing within a territory.

There are huge opportunities to make very large savings on the transactional side of things. When you add all that up, you can quite quickly make some significant savings.

There are certain FX solutions that can be put in place as well, if you get concentrations in currencies, whether or not that’s multi-currency pooling structures.

There are huge opportunities to make very large savings on the transactional side of things. When you add all that up, you can quite quickly make some significant savings. It depends on where you start and where you end up. But as you make changes [in the transactional side], you may then get into payment factories and ultimately [set up] in-house banks.

How does the engagement work in practical terms? A treasurer or a CFO comes to PwC and then you go and look at what their processes are and you come up with an action plan, saying, If you do this, you will get that?

Based on the number of projects we have done in the past, we have a good idea of what kind of costs you should be looking at. You compare that with what they’re paying and you get a reasonable idea of what savings can be made.

That helps us put together a business plan to explain, this is what it’s going to cost, this is how much you’re going to save. Quite quickly you can come up with a relatively accurate estimate of potential savings.

If after that initial assessment you find they are already optimized, then you would not go ahead with the engagement?

That’s exactly right. Obviously, not in every case can you say 50% [savings]. I agree with you that you need to look at the current state. But every time where we have actually taken on a project, we have achieved savings of over 50%.

You need to understand where the companies are in the treasury development model (see below). That said, we’re not saying you need to be at the bottom of the scale [that is, a transactional treasury] to get 50% savings.

Evolution of a treasury function 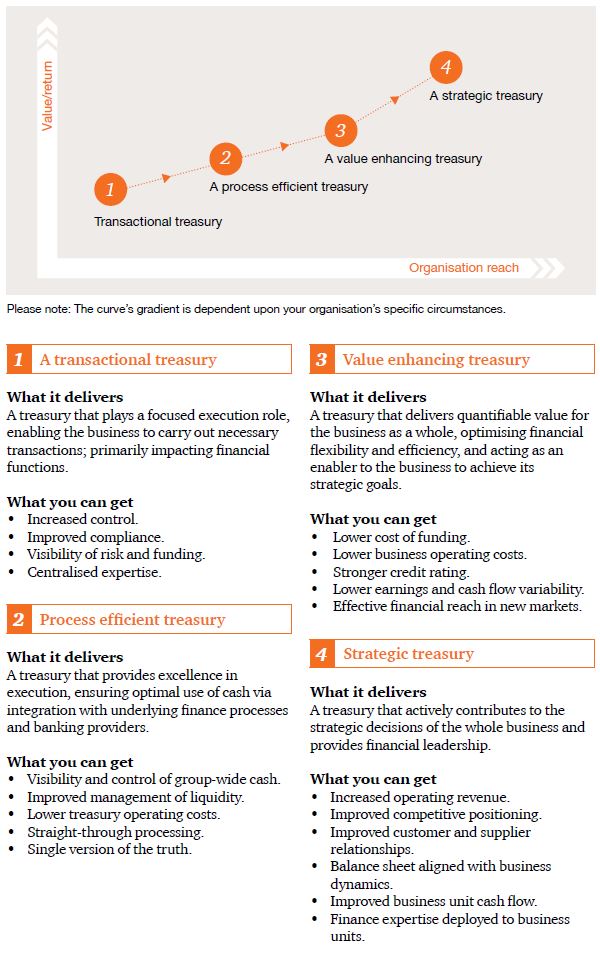 At this point in Asia, including Japan, would you say that most treasury functions are at the transactional stage?

I will say that the companies I have been seeing of late, even the relatively blue-chip companies, are still lower down [the treasury function development curve] than you would expect potentially in Europe, for example, for a company with similar status.

That’s probably because a lot of companies still don’t have a treasury management system. And those that do don’t seem to be using all the features. That is part of the reason why the systems and the process and the visibility aren’t what they would be in Europe or the US.

Can you evolve straight on to number 4, being a strategic treasury, without going through the other three stages?

You have to move along the chain. You can’t just parachute in at the top.

But there’s no one-size-fits-all curve. Some companies can get there quite quickly, it’s a steeper curve; another would take more time, there are more things you need to do. It depends on the complexity and everything else.

Every company is different, every company’s needs are different as are their preferences as to how they want to upgrade from a cultural perspective.

You can start to see the fruits of what you’re doing by month seven or so. In terms of getting your money back, it can take 12, 13 months after the start.

I have heard of some Asian globalizing companies telling consultants: Give us whatever it is that GE has and we want it tomorrow. That won't work, right?

If we look at the time scale of the typical banking project, it will probably take 4 to 5 months from the as-is state to your selection of a regional banking solution, and another 5 or 6 months to implement that.

You can start to see the fruits of what you’re doing by month seven or so. In terms of getting your money back, it can take 12, 13 months after the start.

One project we did a couple of years ago, the company concerned realized savings of €24 million over a two-year period. The fee they paid to get that was €1.5 million. That’s a pretty good return on investment, if you ask me.

Is there a pay-for-performance arrangement? If I don’t get the savings projected, your fee will be lower?

In a sense we quite like the model you suggest, which is the contingency-type approach, because we are confident in the savings we are going to achieve. The downside of that is it gets administratively burdensome.

Once we have given the business plan to the companies, and they can see what’s expected, quite often they become comfortable with that. I’m sure we have had some discussions about what happens if we didn’t perform like what we said, but that’s never happened, so fortunately that’s no problem.

Can you give me an idea as to how much an engagement would cost?

It depends on the scale. As I mentioned, the total cost for the company that realized €24 million in savings over a two-year period was €1.5 million. That’s obviously a very large company. There was another company with annual savings of US$10.5 million, and our fee in total for the project was US$2.2 million.

So the more complicated your treasury function, the higher the potential for a larger return on investment?

Regional spread is also a significant input into what you can get out of it. If you operate in one location in terms of FX, in terms of pooling arrangements, there’s probably less that you’re going to get out of it. Whereas if you’re operating in a number of jurisdictions within the region, there’s a lot more you can do in terms of FX and cash optimization.

Is there an argument to be made that optimizing a simple treasury function will pay future dividends when operations become more complicated? When you cross borders and so on, liquidity management becomes easier because you had already cleaned house?

That’s certainly one of the benefits. If you’re expecting to move into other areas, then it’s easy to build on what you already have.

But quite often the other benefits are related to process and control. I was talking to somebody who was thinking about implementing a system-based solution because of a fraud they had in one of their units. They have a decentralized treasury system.

It was a very small fraud, but it was a fraud that happened in Japan, and triggered [a rethink of the processes]. Can we centralize things, can we improve process and control around treasury? Even if you don’t make the savings in dollar terms from all those banking fees and so on, there are clearly other benefits associated with doing all these things.

Another thing we shouldn’t forget is these are not one-off savings. These are annual savings. So once you factor in, ok, there’s an investment up front but you’re going to get this every year, then the benefits do tend to add up.

What are the nightmare scenarios that your clients or non-clients have encountered, which you think people can learn from in terms of liquidity and general treasury management?

Obviously you have to pay the bank to keep the accounts open and carry out transactions. There is also the associated cost of having staff reconcile all the accounts and everything else. It’s a significant cost for no sound reason.

Is having so many bank accounts a red flag, an indication of fraud?

I have heard people say, though, that the company has no choice but open so many accounts with different banks, because their primary banking partner does not have branches in East Kalimantan in Indonesia, for example, so they have to open an account with another bank that does.

I have heard similar arguments. But there are usually ways around that. There are solutions you can put in place to ensure you’re not leaving cash sitting in that bank account. Your regional provider can usually give you visibility into third-party banks.

I take it PwC’s own treasury function is optimized and it is now at stage 4, a strategic treasury?