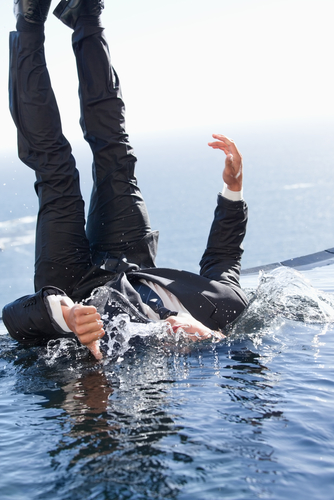 Back in 2011, billionaire Richard Elman, founder of Singapore-listed Noble Group, explained why the commodities powerhouse (2012 sales: US$80.7 billion) had more than US$2.7 billion on its balance sheet. “I get all sorts of problems with people saying we have too much cash,” he said at a briefing. “But I sleep well at night, so we just leave it the way it is.”
Why? “Because I remember in 1997 [during the Asian financial crisis] a bank calling up saying, we want our money back,” he recounted. “That scarred me for life. Now we can comfortably say, you want your money back, we can give you back any time you want it, when you want it.”
Elman conceded that he was getting pushback even within the company. “We still argue about this,” he said. “It’s a very expensive way to run a company, particularly with deposit rates where they are and long-term debt being quite expensive . . . But it’s a very safe way to operate. I think safety first. If we make a little less money, that’s OK.”
That was then. According to S&P Capital IQ, a provider of multi-asset class and real-time data, research and analytics, Noble had cash and short-term investments of "only" US$1.6 billion as of 31 December 2012 – down 43% from end-2011. The company lost US$17.4 million the third quarter last year, its first quarterly loss in 14 years, but is now back in the black, with first-quarter 2013 net profit of US$41 million.
We do not know if Elman, 72, is no longer sleeping so soundly these days. He is still Noble’s chairman, but has turned over day-to-day running of the company to former Goldman Sachs co-president for Asia Yusuf Alireza, 40, who was named CEO in 2012. But if the thinner cash buffer is a concern at Noble, it may be a worry for some in Asia as well.
According to S&P Capital IQ, more than a third of Asia’s 407 biggest listed companies (those with annual revenues of US$1 billion or more that are in net cash) have seen their cash and short-term investments pared by US$123 billion as of end-2012, when compared with their cash holdings in 2010. The decrease ranges from US$12.8 billion at Toyota Motor to US$7.2 billion at BHP Billiton to US$1.2 billion at Noble Group to US$29 million at Telekom Malaysia.
Still Cash-Rich
Not that Asia’s huge cash stockpile has disappeared. Indeed, on aggregate, it is as massive as ever.
According to S&P Capital IQ, the cash hoard of the region’s 17,000 listed companies as of December 2012 stood at US$2.3 trillion – that’s equivalent to a third of China’s entire GDP (see chart below). It’s just that the pace of expansion has slowed from 8.3% in 2011 compared with 2010 (US$2.31 trillion vs. US$2.13 trillion), to just 1% in 2012 compared with 2011 (US$2.33 trillion vs. US$2.31 trillion).
Asia’s Cash Hoard, US$ trillion 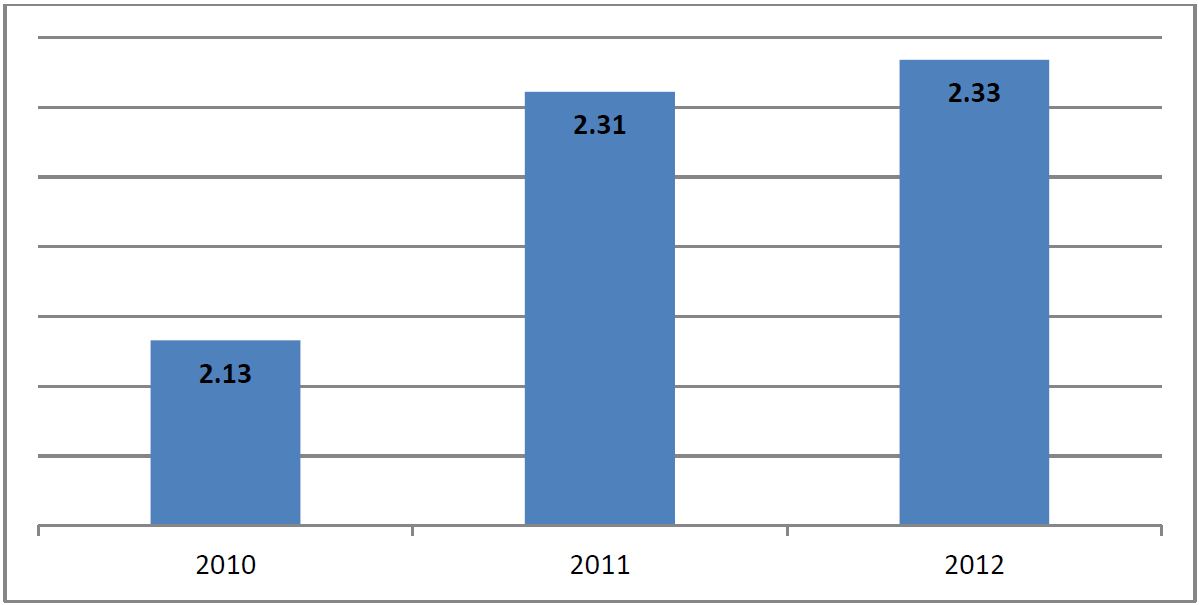 Cash, cash equivalents, short-term investments and trading investments of 17,000 companies listed on Asia’s exchanges, excluding financial institutions, which maintain high cash reserves as part of their normal operations. Local currencies were converted to the US dollar using the market exchange rate for each year. Source: S&P Capital IQ
In fact, of the top 20 richest listed enterprises in Asia, only two – Japan’s Toyota Motor and Mitsui – now have a smaller cash hoard compared with their 2010 levels (see table next page). Asia’s most cash-rich enterprise, China Mobile, has amassed US$65.3 billion in cash and short-term investment as of end-2012. That’s up 21% from 2011 and 38% from 2010. And Korea’s Samsung Electronics, No. 2 in the list, nearly doubled its cash hoard to US$39.6 billion as of March 31 this year – soaring 94% from 2010.
Click image to enlarge
Asia’s 20 Most Cash-Rich Enterprises 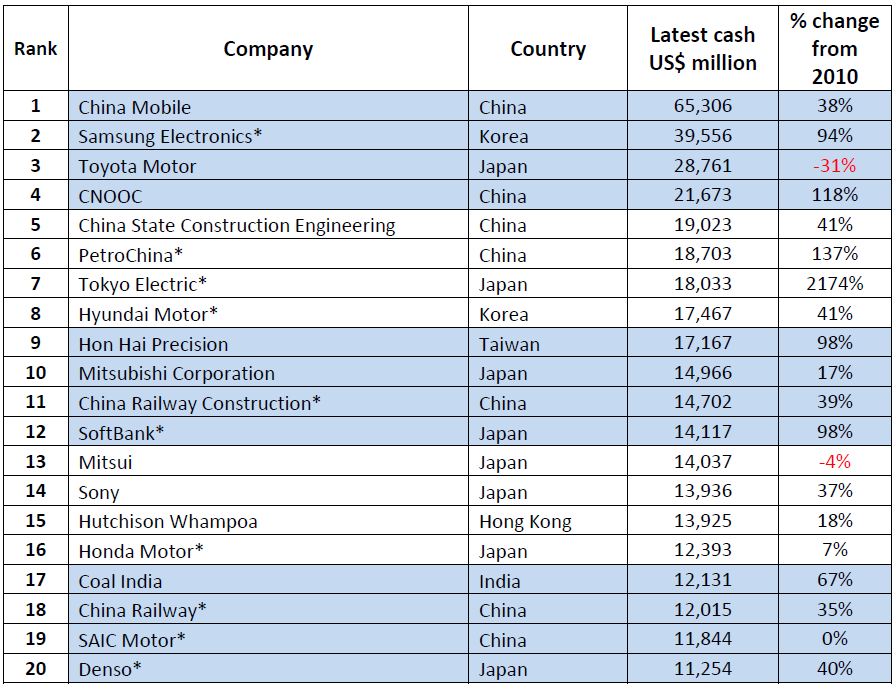 *Cash, cash equivalents, short-term investments and trading investments as of 31 March 2013. The cash positions of the rest of the companies as of 31 December 2012. This ranking was drawn from the list of 407 listed companies with US$1 billion or more in annual revenue that had a net cash position. Financial institutions were excluded because they maintain high cash reserves as part of their normal operations. Local currencies were converted to the US dollar using the current market exchange rate. Sources: S&P Capital IQ and CFO Innovation
The most startling jump was made by seventh-richest Tokyo Electric, whose cash balance surged 2,174% to US$18 billion. Don’t be too impressed, however. The company is the operator of the Fukushima nuclear power station, which was severely damaged by the March 2011 earthquake. Much of Tokyo Electric’s cash came from a 1-trillion-yen bailout from the government earmarked for compensation claims and decommissioning of the reactors.
Country Rankings
Interestingly, most of the region’s wealthiest companies are headquartered in Japan – the 143 billion-dollar listed firms from there are sitting on US$495 billion in cash (see table below). China’s economy may be larger, but in terms of corporate wealth, only 115 of its billion-dollar enterprises are in net cash, with US$432 billion in aggregate, 13% smaller than the collective hoard of their Japanese peers.
Where’s the Cash? 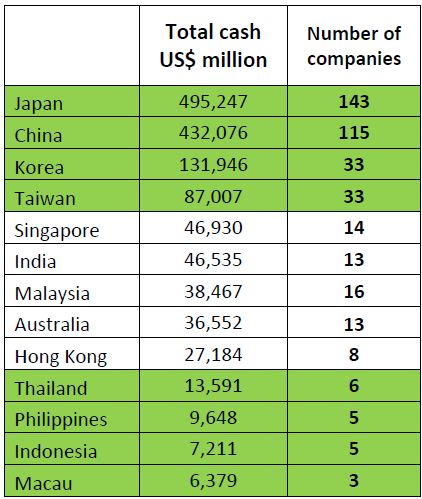 Sources: S&P Capital IQ and CFO Innovation
Both Korea and Taiwan each have 33 billion-dollar companies in net cash position, but the Koreans have more money – at US$131.9 billion, their collective hoard is 52% larger than Taiwan’s aggregate US$87 billion.
The cash on hand of the richest Korean company, Samsung, which makes its own-brand smartphones, tablets, TVs and other electronic products, is more than two times larger than that of Taiwan’s No. 1, Hon Hai Precision, a contract manufacturer of Apple’s iPhones and iPads (US$39.6 billion versus US$17.2 billion). It’s a commentary of a sort about where to position yourself in the value chain to amass the most wealth.
Singapore may be tiny in terms of population, but its corporate cash at US$46.9 billion is slightly larger than 240-times-more-populous India (US$46.5 billion). The No. 1 Singapore company is agribusiness concern Wilmar International, which has US$10.4 billion in cash; India’s most cash-rich company is Coal India, with US$12.1 billion.
Hong Kong has only eight enterprises on the list even though most of the richest mainland Chinese companies (among them China Mobile, CNOOC and PetroChina) are listed in Hong Kong. We consider them as Chinese enterprises, not Hong Kong companies, as ownership and the bulk of business activities are in the mainland. The most cash-rich home-grown Hong Kong firm is Li Ka-Shing’s Hutchison Whampoa, which has US$13.9 billion (see table below).
The Top Five Cash-Rich Firms, By Country 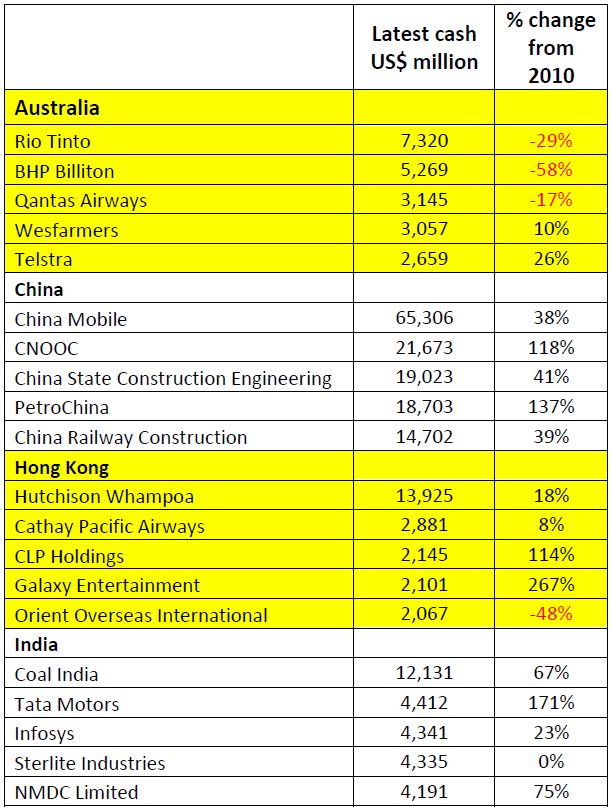 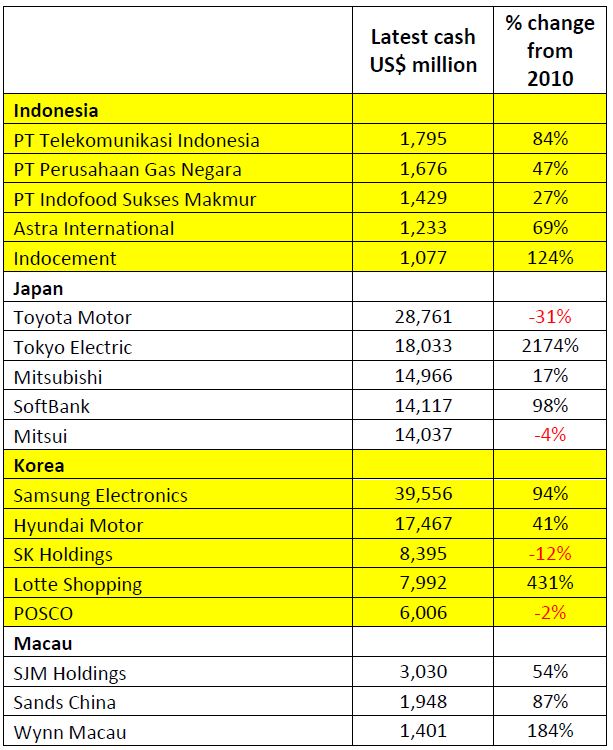 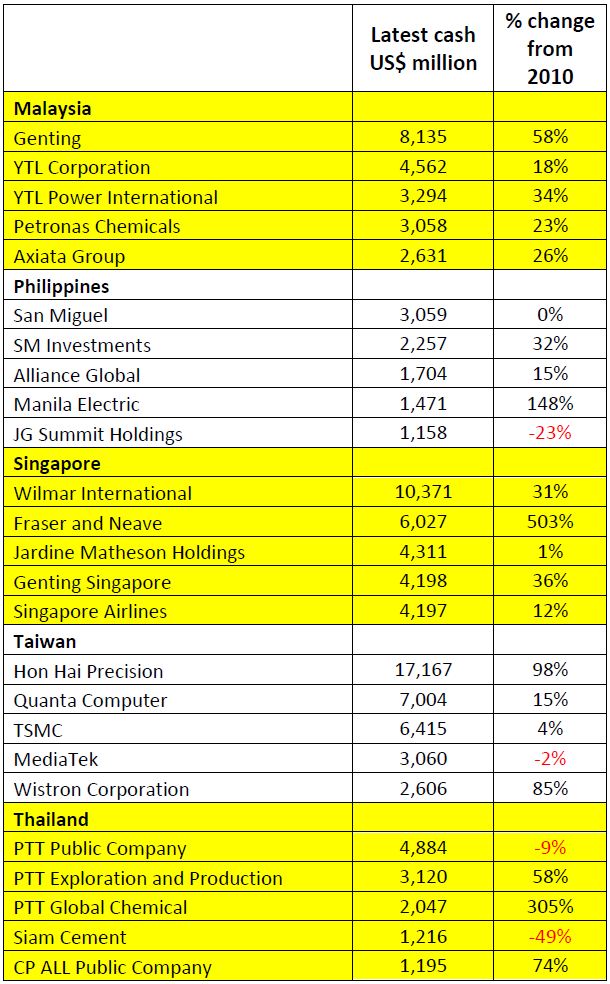 Source: S&P Capital IQ
Too Much Cash
What do all these numbers tell us? The CFOs of many companies in Asia are sleeping quite soundly despite the volatile global environment. Companies that have been drawing down cash – Noble Group and Toyota, to name two – may be a bit more antsy, but at least they were able to use the cash they had accumulated for a rainy day, which is what it is meant to do.
But some may be piling up too much cash. Take China Mobile, China’s dominant telecom provider. Its US$65.3 billion cash hoard is equivalent to 27% of the top 15’s total tally – and is 65% larger than No. 2 Samsung Electronics.  China Mobile CFO Xue Taohai may sleep very soundly at night, but does he really need to lie on an ultra-thick mattress and dozens of fat pillows?
In 2010, when China Mobile’s cash holdings stood at US$47 billion, credit rating agency Moody’s estimated its cash-to-debt ratio at 400%. The average ratio among the top 14 cash-rich companies on the list compiled by Moody’s (which excluded financial firms and those in Australia and Japan) was a more reasonable 38%.
One good thing about China Mobile’s cash is that CFO Xue is trying to extract yield out of it by placing the money in short term investments. About 82% of China Mobile’s cash is parked in short-term investments, including money market funds.
Other cash-rich companies that have placed a substantial amount of their cash in short-term instruments are Malaysian shipping company MISC (98%), Hong Kong power firm CLP Holdings (94%), Indian telecom operator Bharti Airtel (75%), Chinese oil major CNOOC (59%) and Japan’s Toyota (55%).
The same thing cannot be said of Samsung. According to S&P Capital IQ, all of its US$39.3 billion is in the form of cash and cash equivalents – the researchers found nothing in short-term investments when they perused Samsung’s latest annual report. This implies that the value of the Korean company’s cash is in danger of being eroded by inflation because banks typically pay next-to-nothing in interest.
Sleepless Nights
The issue of companies with too much cash hit the headlines earlier this year when activist investor David Einhorn sued Apple to reduce its humongous US$139 billion stock pile (now grown to US$145 billion, up 6% in just three months). Einhorn eventually dropped the legal action; Apple later promised to return US$100 billion to shareholders by 2015 by increasing the dividend ratio to 15% and the share buyback program to US$60 billion.
It is unlikely that Samsung, for example, will come under pressure from stakeholders for it to return some of the cash. More likely are intensified expectations about using some of the pile to fund growth, including M&A. Shuanghui International, China’s largest chilled meat processor, has US$775 million in cash and short-term investments. On 29 May, it agreed to buy America’s Smithfield Foods for US$7.1 billion, the largest ever acquisition by a Chinese company in the US.
Moody’s, for one, believes that “the build-up of cash in Asia is less a reaction to the global credit condition than a way to support future growth and expansion, as well as providing a general liquidity buffer.” That was an assessment it made in 2010 – as an example, Moody’s pointed to plans by Hyundai Motor to take control of Hyundai Engineering and Construction for US$3.6 billion, a deal finalised in 2011. Today Hyundai Motor has US$17.5 billion in cash, up 41% from 2010.
Moody’s says it “views persistent high cash balances positively. They are a reflection of strong liquidity, which provides financial flexibility and serves as an important buffer during times of uncertainty.”
But CFOs must make sure the excess cash yields optimum returns consistent with prudence and safety. And surely not sleeping soundly for a few nights in anticipation of a big acquisition is not always a bad thing, as even Noble’s Elman would agree.
About the Author

Cesar Bacani is the Editor-in-Chief of CFO Innovation.