The CFO and Sales: What’s the Right Price? The Equation Isn’t So Simple 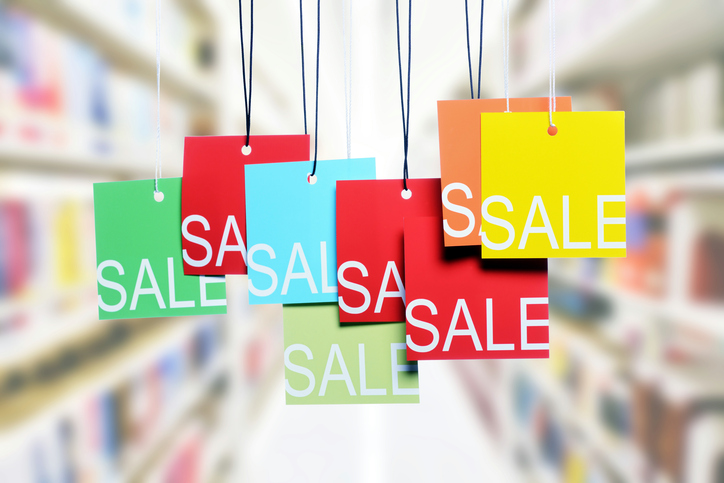 Dust off your microeconomics textbook and read about “econs”: fully rational, always calculating individuals who make decisions with actuarial precision. Econs view companies’ negotiation tactics and sales promotions as useless clutter, obstacles to avoid as they try to maximize their utility.

Unlike econs, humans instinctively consider a number of other factors when measuring the merits of a purchase. They are often accustomed to anchoring on reference points—that is, relying heavily on an opening number, such as a car manufacturer’s suggested retail price (MSRP).

They are also highly sensitive to how much their neighbors paid for the same product. And timing matters. Consumers can be fickle, and behavioral science suggests that this is completely natural, if not necessarily rational.

Organizations can set up guardrails that account for behavioral biases and faulty execution in sales. Finance leaders can also use some tactics to develop more behaviorally savvy pricing strategies and help their sales organizations carry them through to execution

These phenomena aren’t confined to only the purchaser experience. Salespeople also succumb to behavioral biases, which can affect their ability to maintain price points. Two common pitfalls:

There is hope, however. By confronting these mistakes head-on, organizations can set up guardrails that account for behavioral biases and faulty execution. In this issue of CFO Insights, we’ll consider some tactics finance leaders can use to develop more behaviorally savvy pricing strategies and help their sales organizations carry them through to execution.

For sports fans, there’s nothing better than a big comeback, and nothing worse than the immense heartbreak that comes from letting it all slip away. The pricing lesson: People can be profoundly affected by where something starts and how it finishes.

When someone buys a new car they may happily talk about how big a discount they received from the list price. If an airline adds a $30 surcharge for checking an extra bag, however, a grumbling customer may feel taken advantage of.

Here are some of the cognitive biases that hinder well-intentioned pricing:

Reference points matter more. Daniel Kahneman and Amos Tversky, in their Nobel Prize-winning work, demonstrated that the reference points people pick have drastic effects on their perceptions of value. Since then, further research has shown that the tie to reference points goes even deeper—that people will often anchor on the chosen reference point even when other relevant market information is readily available to inform their decision-making.

An experiment conducted on real-estate values, in which trained negotiators were assigned the role of either the seller or the purchaser, illustrates this point. Participants were given a brochure with relevant property and market information to inform their negotiations. Four groups were randomly provided with brochures that had one of four options: a high asking price, a low asking price, a market asking price, or no asking price at all.

After the negotiation was completed, the results showed that both sellers and purchasers systematically overweighed the importance of the asking price, despite having other relevant market information readily available. Those with high asking prices started with higher opening bids and negotiated prices. The reverse occurred for the low-asking-price group. And, as would be assumed, the market-consistent asking price held constant.

The most interesting finding: Those with no asking price settled upon the expected market value when all they had to rely on was the property and market information. This suggests that, if people are provided with relevant information, they have the ability to discern market value—but our cognitive tendencies find it more attractive to anchor on an easy-to-reference value.

How can organizations price their products and services to achieve profitability and remain viable in the marketplace? How can they effectively communicate the value behind those prices?

One loss is worse than two wins. According to traditional economic theory, if we win $10, we should be just as happy as we would be upset if we lost $10. In practice, this is rarely the case.

Consider if we were to offer you a $100 bet on a coin toss: would you take the risk? In other words, if the coin lands on heads you win $100, but if it shows tails you lose $100. Most people would answer no, although mathematically they should be indifferent to the outcome: There is a 50% chance of winning.

However, the idea of losing $100 is so distasteful that most would shy away from the bet unless they could win at least $200 for the risk of losing $100. This indicates that people are loss averse: They hate losses twice as much as they enjoy gains.

Even when market conditions suggest that price increases may be warranted, people may feel like they are being taken advantage of, such as when hardware stores raise the price of show shovels during blizzards. This holds true for standard (and even anticipated) price increases as well.

For example, some customers cancel their cable subscriptions after the introductory price expires and transitions to a “market-based” price. And fast-food chains might suffer social media backlash when they increase prices on promotional items.

Most people choose the $450 sure thing, even though, mathematically, the coin toss is a better bet (an expected value of $500). If you ran each scenario 100 times, you should expect to average $500 in Scenario A (11% more than your take in Scenario B).

Salespeople regularly deal with scenarios where the same mental calculations occur. And unlike in the example above, they are making a number of bets where the larger sample size will almost certainly redound to their benefit.

Given these pricing tendencies and traps, how can organizations price their products and services to achieve profitability and remain viable in the marketplace? How can they effectively communicate the value behind those prices?

Here, behavioral economics lessons can be leveraged to devise tactics that speak to consumers’ intuitions and methods of perceiving value.

Many believe that consumers will immediately disregard the anchor if it does not align with their personal value propositions, but research indicates that this is not always true. One of Tversky and Kahneman’s most famous studies demonstrates how powerful even random anchors are in influencing perceptions.

Participants were asked to spin a wheel that ranged from 0 to 100. They were unaware that the wheel was fixed to land only on 10 or 65. Each participant was then asked if they thought the percentage of African countries affiliated with the United Nations was higher or lower than the number they spun on the wheel.

After answering that question, they were asked to guess the overall percentage of African countries that were members of the United Nations. Even though participants inherently understood that the number on the wheel had no bearing on the question, they were nonetheless influenced.

Those who landed on 10 estimated 25% on average, while those who hit 65 estimated 45%. This phenomenon is referred to as anchoring and adjustment. The takeaway isn’t to anchor on randomness but, instead, to make the value of the product or service known right away.

The UK crafted an outreach letter to taxpayers who were behind on payments that started with, “Nine out of 10 people in your town pay their taxes on time.” Those who received this message paid their taxes 23% faster

Price still matters, but anchor on fairness. Beyond value-based anchors, price still plays a major role in decision-making. Behavioral economics shows that the concept of fairness weighs heavily both on consumers and on the sales force. For this reason, social norms and social proof can play major roles in assessing value.

To increase taxpayer compliance, the United Kingdom’s Behavioral Insights team crafted an outreach letter to taxpayers who were behind on payments that started with, “Nine out of 10 people in your town pay their taxes on time.” Those who received this message paid their taxes 23% faster than those who received a nearly identical letter without the social-proof message.

Social proof can be applied both implicitly and explicitly to pricing valuations. People take cues from their peers on how to behave and, similarly, on how to form valuations. Consider, for example, how tech companies hold large launch events featuring long lines of eager customers waiting to purchase the newest gadget, which implicitly demonstrates the value of their products.

Discounts are great; free is better. While people enjoy discounts, getting something for “free” is much more compelling. When something is free, people instinctively overweight the value of the item even in comparison to its market price. In behavioral economics, this is referred to as the zero-price effect.

One study illustrates how powerful the zero-price effect can be. Participants were offered a choice between two gift cards: They could receive a $20 gift card for $7 or a $10 gift card for free. Though the $20 gift certificate had $13 of value ($20 - $7 = $13) versus only $10 for the free card, all 65 participants chose the free card. Once the temptation of free entered into the equation, rational behavior disappeared.

Behavioral and audience considerations for pricing 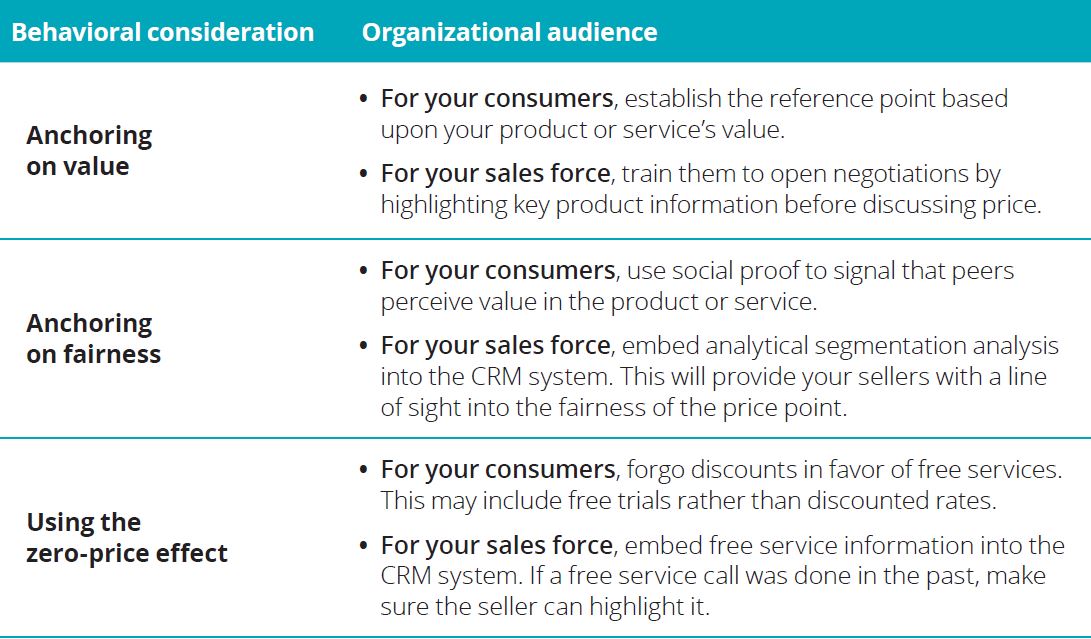 These behavioral-based tactics lay the foundation for implementing pricing policies that speak to our human intuitions. While your own pricing strategy might start with spreadsheets, market segmentation, and high-powered algorithms, all that hard work can go to waste if you don’t focus enough on the humans making the decisions.

Consider making these four steps a priority before launch:

Be the first to set the anchor, and communicate the value when anchoring. What about the product or service makes it special? Tell that story.

Promote social fairness whenever possible. If negotiating is part of the process, start with the sales representative and end with the consumer. After all, if the salesperson does not feel comfortable complying with the strategy, the customer will never see it.

If using analytical segmentation, make those insights readily available to the sales force by embedding them into the CRM system.

Put a spotlight on the little extras you offer. For example, if service calls come at no additional price, highlight a “$0 service call” on the invoice.

Keep it simple. The choice architecture that you establish directs how your stakeholders will interact with your policy. Make sure it is easy to understand. If they need to over-think it, it may be too difficult.

Many pricing professionals take great care to ensure their strategies are profitable and feasible. Behavioral economics can help make them accessible.