Case Study: The Winter of the Sportswear CFO 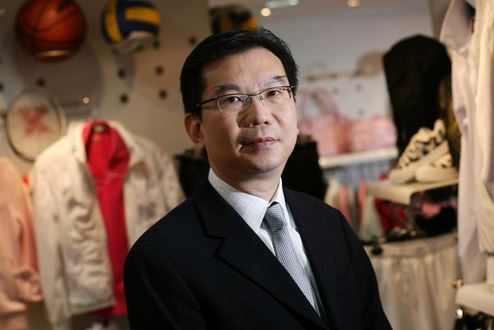 It’s not exactly a set of numbers that a CFO would be happy to announce. But it could have been worse.
Last month, Chinese sportswear company Xtep International Holdings reported 2013 profit attributable to equity shareholders of  RMB606 million (US$98 million) on sales of RMB4.3 billion (US$703 million) – down 25.2% and 21.7%, respectively, from 2012.
But CFO Terry Ho has an explanation. He says the entire industry has been hit by overcapacity and excess inventory. Indeed, key competitor Li Ning lost RMB392 million in 2013 while sales fell 13% to RMB5.8 billion.
Even market leader Anta saw 2013 profits decline 3.2% to RMB1.3 billion on sales of RMB7.3 billion, down 4.5% from 2012. So did Nike (down 3% to sales of US$2.4 billion), although Adidas did eke out a gain (sales up 6% to €1.6 billion), after falling 16% in 2009.
The CFO says Xtep had bitten the bullet and addressed its inventory problems by, among other things, closing 236 retail outlets in the past two years. Leading local brands Xtep, Anta, Li Ning, Peak Sportswear and China Dongxiang shed a combined 2,284 stores last year.
The fewer retail outlets are raising hopes that the overcapacity and associated price wars sparked by the euphoria over China’s hosting of the 2008 Summer Olympics are finally waning. Actual demand had fallen short of the inflated expectations, although China’s sportswear market is now estimated to be worth US$24 billion.
“Over recent months, both Xtep and sportswear companies in China have been reporting improving operational performance,” analysts at J.P.Morgan wrote in a report last month. They set a target of HK$3.90 per share for Xtep, up 18% from where the stock closed on 9 April.
Case study
The way the 48-year-old Ho and his finance team are handling the challenges serves as a useful case study for other finance executives. Xtep’s situation is not uncommon in fast-growth emerging Asia, where domestic consumption is becoming a key economic driver – and fuelling demand for sportswear and other lifestyle goods and services.
China’s GDP, for example, has been growing at a rapid clip, although it moderated to 7.7% in 2013 from 10.4% in 2010. According to business intelligence group Euromonitor International, consumer expenditures in China surged 65% to US$3.4 trillion from 2010 to 2013.
The Philippine economy grew 7.2% last year, second only to China. Consumer expenditures jumped 42% to US$201.6 billion from 2010 to 2013. Domestic consumption is on the upswing as well in Indonesia, where consumer expenditures rose 21% to US$486 billion from 2010 to 2013, and in India (up 17% to US$1.1 trillion in the same period).
But the rapid growth tends to attract new entrants, both local and foreign, even as the incumbents rapidly expand. It could all turn into a free-for-all that results in overcapacity, heavy discounting, brand erosion and, in the case of Li Ning, outright losses.
Plan of action
This is what happened in China. Two years ago, says Ho, you had 15 sportswear stores jostling for customers in the same street. “Everybody was selling the same things and eventually had to bring down their prices from RMB500 to RMB200 to RMB100,” he recalls. “Everybody made a loss and so many had to close.”
It was, as Anta CFO Ling Shing Ping told CFO Innovation in 2012, “the winter of the sportswear industry.” Anta’s sales that year fell 14% from 2011. Turnover at Xtep, on the other hand, basically stayed the same (it rose by 0.2%).
Now it is Ho’s turn to become a winter CFO. “Everybody is learning the hard way,” he says philosophically. First it was Adidas in 2009, then Li Ning two years later, Anta in 2012 and now Xtep.
But Ho is confident that Xtep’s a strategy will see it through. The plan of action includes:
Branding is king
Xtep was started in 1999 as an original equipment manufacturer (OEM) by entrepreneur Ding Shui Po, 42, who is chairman and CEO. A member of the Institute of Chartered Accountants in England and Wales and the Hong Kong Institute of Certified Public Accountant, Ho was hired in 2007 and helped the company list in Hong Kong the next year.
Xtep started to move away from OEM in 2002 when it launched its own brand of sports shoes and sportswear, marking them with a stylized ‘X’ and ‘Xtep.’ It was clear to the company that the days of the OEM were on the wane as the sportswear action shifted to domestic consumption. In such an environment, branding is king.
Indeed, in 2013, the seven largest sportswear companies in China all had their own distinctive logos – led by global giants Adidas and Nike (see chart below).
Running for Gold
FY2013 Sales, in RMB billion 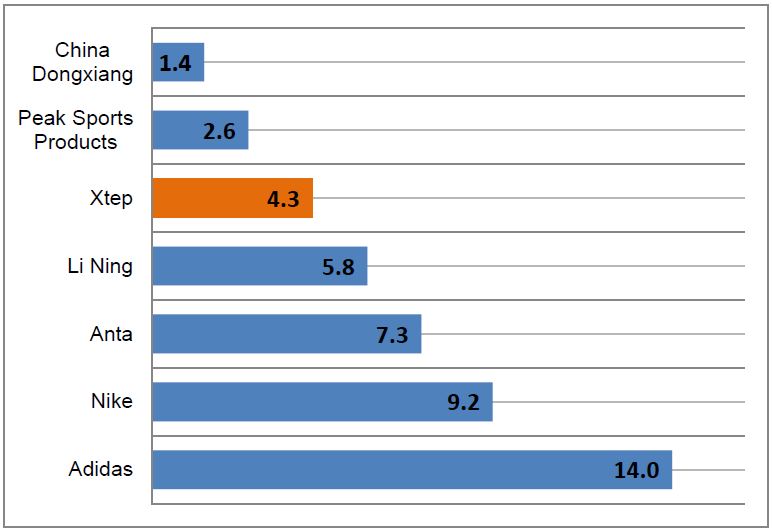 Revenues for Adidas (€1.6 billion) and Nike (US$1.5 billion) are for Greater China (Mainland, Hong Kong, Macau and Taiwan) and are converted to renminbi at the current exchange rate. Sources: 2013 annual reports of the respective companies
The Xtep brand appears on apparel – shirts, jackets, shorts, pants, kidswear – and on footwear, mainly running and cross-training shoes. They are sold mainly in China’s second- to fourth-tier cities. Xtep has effectively ceded Beijing, Shanghai and other metropolitan areas to the likes of Adidas and Nike (and Anta’s upscale Fila, the Italian trademark it acquired for use in China).
“You don’t need to play a sport to wear our products,” says Ho. The market for running shoes is much bigger than for basketball shoes, for example. “Marathons are more affordable to sponsor” – Ho says sponsoring a basketball league can cost at least RMB1 million.
To strengthen the brand, Xtep sponsors sports events – it supported China’s 12th National Games and has five-year sponsorship deal with the Xiamen International Marathon and a three-year deal with the Standard Chartered Hong Kong Marathon – and hires sports stars and celebrities as endorsers. Ho allocates 11% to 13% of revenues on sponsorship, promotions and advertising.
Actual spending on branding fell last year given the 25% fall in sales, but the CFO is keeping to the 11%-13% discipline. “There’s always something you can cut,” he says. For example, the main endorser of Xtep’s running shoes is US sprinter Justin Gatlin, who won a silver and a bronze at the 2012 Olympics. Xtep decided against hiring the gold medalist. “It was the price point,” says Ho.
Protecting Margins
He could have increased marketing spend, but Ho is determined to protect Xtep’s margins. It was able to sustain gross profit margin at the 40% level last year despite the revenue decline and its decision to grant a bigger discount to distributors (to 62% from 60% in 2012). The operating profit margin was likewise kept stable at 20.6% (2012: 20.4%).
Sales down, but gross profit margin stable
% of turnover 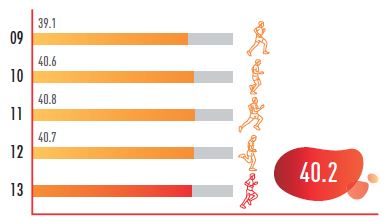