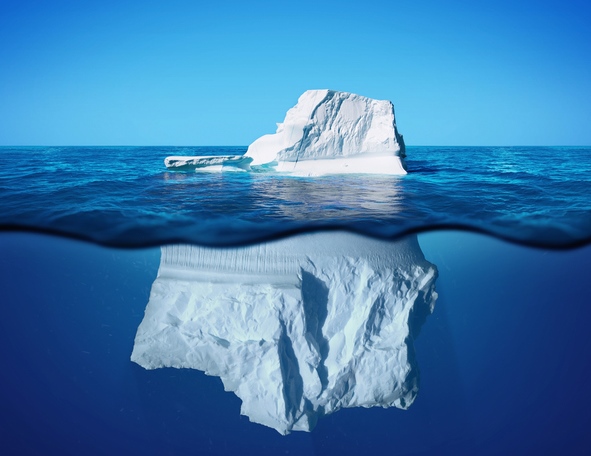 Culture is like an iceberg. The part that can be seen above the water reflects the isolated behaviors and outcomes that can surprise and sometimes frustrate incoming executives.

The bulk of it, though, the submerged part, comprises the “shared beliefs and assumptions” that are often shaped over generations and can sometimes punch a hole through titanic corporate initiatives.

That is why changing organizational culture is often both a priority and a challenge. It is also why many executives find it difficult to precisely articulate and deal with culture.

Indeed, Deloitte’s Global Human Capital Trends 2016 report, based on a survey of more than 7,000 business and human resources leaders, found that 82% of respondents view “culture as a potential competitive advantage,” while only 28% believe they “understand their culture well,” and 19% believe their organization has the “right culture.”

Little wonder that not systematically understanding culture and addressing change when needed can undermine leadership success and corporate performance.

Going back to the iceberg metaphor, what we see above the surface is often the artifacts and consequences of culture rather that the values, beliefs, and assumptions that actually drive the culture—and the behaviors and outcomes that result.

To complicate matters, there may be an overall company culture and sub-cultures across groups that can sometimes be in conflict. While CEOs have the authority to lead cultural change across a company, typically other C-suite executives, including CFOs, can only be supportive of a CEO’s companywide culture change efforts, or they are limited in scope to drive belief changes in their specific sub-organization.

Yet, every C-suite executive should be able to diagnose dysfunctional cultural attributes and get at the underlying beliefs to help CEOs drive company-wide culture change.

A pragmatic way to put this model into practice is to frame it as four distinct steps: diagnose, name, and validate the culture of the organization; reframe the cultural narrative; role-model and communicate cultural change; and reinforce a new belief system. Let’s examine each step in more detail.

Diagnose, name, and validate the culture. The first step is to diagnose and articulate the beliefs that comprise the existing culture. To do this, it is useful to have executives think through and name organizational outcomes they have observed and that they do or do not like.

Once the hypotheses about the beliefs that comprise culture are diagnosed, it is important to validate them. This begins with the recognition that existing beliefs did not arise in a vacuum and often served a good purpose even if they are not useful now.

When you hypothesize a belief that no longer serves your company very well, try to validate it as the prevailing belief through discussions with your peers, and try to understand its origins and the purpose it served.

Keep in mind that the origins of beliefs can go back many generations of CEOs. A company’s current CEO, for example, may be widely regarded as congenial and supportive of collaboration, yet the prevalent culture may be characterized by extensive delegation upward and lack of information sharing and ownership of decisions across key leaders.

Why? A previous CEO may have created a culture in which many managers did not feel safe to fully share opinions, and chose to delegate up critical choices to minimize personal risk. That culture can persist long after the CEO who created it has departed.

Creating new narratives and role-modeling may not be sufficient to get your organization to the tipping point of widely adopting a new culture . . . You may also have to recruit new leaders and staff

Not all cultural attributes are bad, of course. It’s important to be clear how to work with and utilize the current culture for competitive advantage before seeking to transform it.

An incoming executive focused on culture change should first diagnose the prevailing culture and determine whether and to what degree to fit within and leverage it, or establish strategies for transforming it in order to execute effectively on strategic priorities.

In the latter case, the costs and timeframes for manifesting cultural change must be balanced against the benefits that can flow from the new culture.

Reframe existing narratives. The second step to culture change is to reframe the narratives that will be used to change beliefs.

To begin, it is important to create a narrative that shows the value of the widely held beliefs and also the pitfalls and inappropriateness of the beliefs in other contexts. It can also be useful to articulate, in detail, the beliefs, behaviors, and outcomes that are desired.

In practice, narratives to challenge existing beliefs need to be carefully crafted (and communicated) to acknowledge the value, but also disaffirm the misapplication of the beliefs.

Establishing new beliefs requires role-modeling— demonstrating by doing things consistent with new beliefs and rewarding those who behave in ways that support desired outcomes and beliefs.

The first step is to communicate what is valued not only at the outcome level, but also at the belief level. This is likely to entail creating and executing a consistent communications strategy around the culture change you are trying to deliver.

Next, as a leader, you have to behave and act in a manner consistent with the culture you desire. Your staff are observing your behaviors as a primary source of cues on the values and beliefs that will drive the organization going forward.

As cultures persist over a very long period, creating new narratives and role- modeling may not be sufficient to get your organization to the tipping point of widely adopting a new culture in a timely way. Instead, to accelerate culture change you may also have to recruit new leaders and staff who share beliefs similar to those you wish to manifest in your organization.

Reinforce and communicate desired beliefs, behaviors, and outcomes. To establish a new set of behaviors and beliefs in a sustained way, it is important to revisit incentives and performance management policies and align them to the culture you want to create.

Through every stage of the cultural change and reinforcement process, it is important to communicate beliefs and expected behaviors, and to explicitly articulate and reinforce the desirable beliefs.

Some companies, for example, are publishing cultural manifestos. And today, video and electronic media, used well, can further amplify and expand the reach of critical communications and cultural narratives to key audiences.

Not engaging and understanding culture systematically . . . increases the likelihood of the observation, widely attributed to Peter Drucker, that “Culture eats strategy for breakfast!”

C-suite executives have fundamentally different roles in catalyzing culture change. CEOs need to own the narrative and be the champion of companywide culture change. Others in the C-suite, while generally limited in scope to lead culture change, should support the CEO in such efforts.

To define culture and change it is hard. By working backward from observed outcomes to behaviors and beliefs, however, you can hypothesize and begin to validate key cultural attributes and understand their value and origins.

Strategies for modifying the cultural narratives, reframing beliefs through role modeling and selective recruiting, and reinforcing cultures through metric and incentive changes and targeted communications can then be deployed to drive culture change.

Not engaging and understanding culture systematically, particularly early in an executive’s transition, increases the likelihood of the observation, widely attributed to Peter Drucker, that “Culture eats strategy for breakfast!” 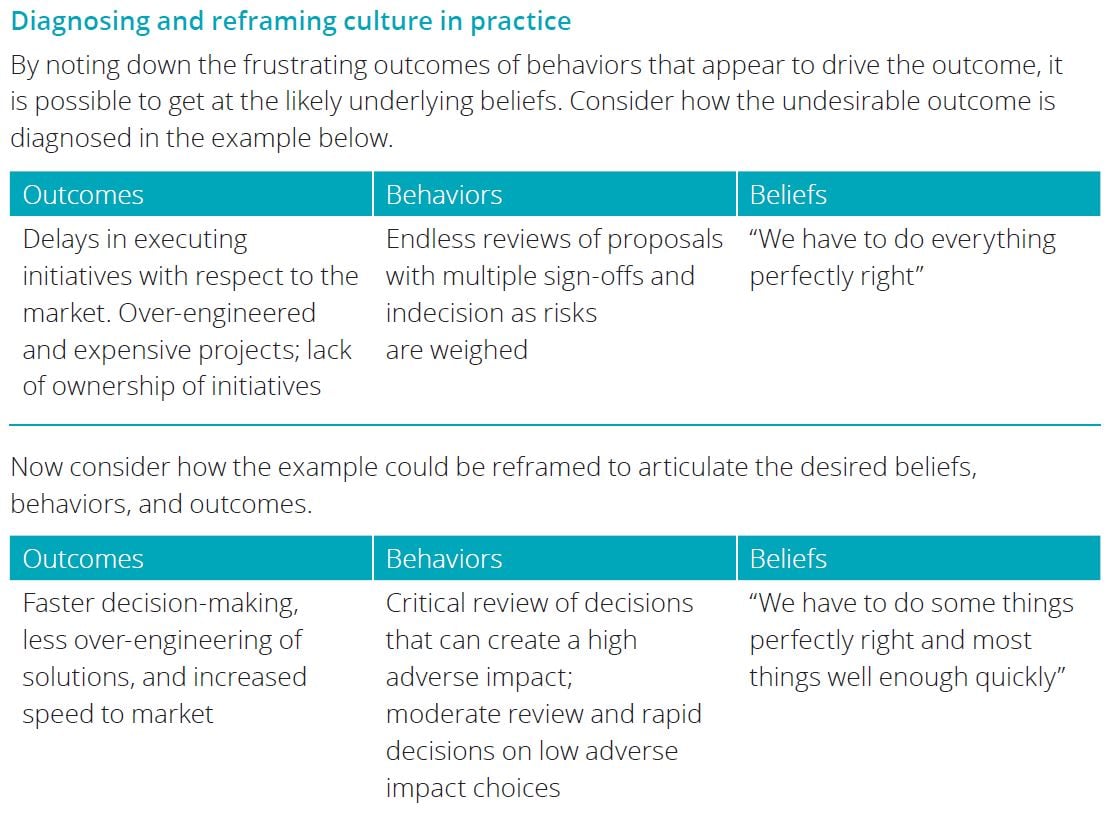