Benchmarking: How to Tell If Your Finance Function Is Up to Scratch 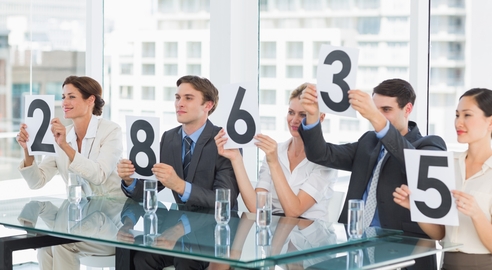 Here’s a data point that should be of interest to CFOs and finance functions everywhere. According to the 2014 benchmarking study of the Institute of Singapore Chartered Accountants (ISCA), the average cost of finance globally, as a percentage of revenue, is 0.93%.

Are you feeling inadequate yet?

So how are Singapore’s companies and finance departments doing compared to their peers around the world? Not too well, it appears.

Or maybe your own metrics are in fact better than these global averages, which were extracted from SAP’s global peer group database of 1,541 companies. (The software company sponsored the study.) If so, congratulations.

But just to raise the ante, the ISCA report also contains the average of the Top 25% companies worldwide. Their scorecard, as expected, contains superior numbers than the averages of the entire universe (see table below):

How Are You Doing Compared With Your Peers?

The global peer group comprises 1,541 companies in SAP’s benchmarking database. The money amounts were denominated in Singapore dollars in the ISCA study. For this article, the figures were converted to US dollars at the exchange rate of S$1 to US$0.79615. Sources: 2nd ISCA Productivity Scorecard and Benchmarking Survey Report, ISCA, SAP, CFO Innovation, OANDA

ISCA actually conducted the study to benchmark the productivity of Singapore companies and finance functions, as well as those of public accounting firms, against their global peers.

So how are Singapore’s companies and finance departments doing compared to their peers around the world? Not too well, it appears. On average, they perform significantly worse on five of the 14 key productivity indicators, and more or less the same as global peers on five other metrics (see table below).

Singapore’s Scorecard: Can Do Better

Singapore respondents numbered 221 accountants in business. The global peer group comprises 1,541 companies in SAP’s benchmarking database.  The money amounts were denominated in Singapore dollars in the ISCA study. For this article, the figures were converted to US dollars at the exchange rate of S$1 to US$0.79615. Sources: 2nd ISCA Productivity Scorecard and Benchmarking Survey Report, ISCA, SAP, CFO Innovation, OANDA

Close, but no cigar
The Singapore businesses that were surveyed are actually outperforming on some metrics. At 12.8%, their average operating margin is 2.6 percentage points better than that of their global peers.

The average cost of goods and services as a percentage of revenue of the companies surveyed in Singapore is also lower than the global peers – 59.1% versus 64% – indicating good cost management.

It would seem that despite finance’s below average performance, the business as a whole still manages to outperform the global peers.

Strangely enough, the accounting and finance (A&F) metrics are sub-par compared with the global average, while the overall organization’s metrics are generally better.

It takes the Singapore companies surveyed 27.9 days to close the annual books, for example, compared with just 18.5 days for their global peers.

Finance functions in Singapore are also not as efficient as global peers in capital efficiency, with Days Sales Outstanding at 56.8 days (global average: 44.9 days) and receivables overdue at 20.8% of the total (global: 11.5%).

It would seem that despite finance’s below average performance, the business as a whole still manages to outperform the global peers.

Does this mean that A&F efficiency has little to do with revenues and profits in Singapore? Or does this imply that if the efficiency metrics of finance and accounting improve, the topline and bottom line will also improve?

It is difficult to tell on the evidence of the 2014 survey alone, but comparing this year’s results with the first study, done in 2013, suggests that the second hypothesis may be the more likely one (see table below).

Finance efficiency down, revenue also down

Some metrics in the 2014 study were not part of the 2013 survey, and so are excluded from this table. Sources: 2nd ISCA Productivity Scorecard and Benchmarking Survey Report, ISCA, CFO Innovation

There are many other reasons for revenue to increase or decrease, of course, and, admittedly, the correlation between how long it takes to close the books and topline growth does not seem to be obvious or all that strong.

But the link between days sales outstanding and revenue is certainly strong – the longer finance and sales are unable to get customers pay up, the smaller the revenue that can actually be booked.

Other metrics such as cost of goods and services sold and SG&A expenses also have a direct bearing on sales and profit, but these were not included in the 2013 benchmarking exercise.

To be fair, there may be understandable reasons behind Singapore underperformance in some of the performance metrics.

The 2014 benchmarking found that that it takes 1.5 times longer for Singapore firms, on average, to close annual and quarterly books compared with global peers.

“This could be due to Singapore being a hub for regional headquarters and thus, most of A&F functions are required to carry out consolidation, which typically takes a longer time,” says the ISCA report.

The same set of circumstances may explain why audit cost in Singapore is about twice what their global peers pay. The audit of headquarters can be extensive and complex, and thus more expensive.

Another reason, said the report, may be “the higher compliance costs that are mandatory for Singapore companies.”

But the reasons behind underperformance in receivables overdue do not appear quite as valid. “This shows that Singapore companies are not as efficient as their global peers in collecting receivables,” says ISCA.

“This could be due to the companies not leveraging enough on IT and/or having a smaller team to manage the receivables.” It’s also possible that companies have “a lax attitude” when it comes to overdue payments because working capital continues to be cheap in Singapore.

The reference to information technology highlights one of ISCA’s key conclusions. “Singapore companies would do well to also leverage on technology to enhance efficiency and raise productivity in managing their A&F functions,” the report recommends.

Is technology adoption really a good response? That’s what the survey findings appear to suggest.

For example, they found that companies that extensively use a financial cockpit/dashboard reported higher revenue per employee (5.5% to 24.2%) compared with enterprises that have limited or no access to such technology tools (see chart below).

Respondents were asked to rate their company’s technology adoption on a scale of 1 (No coverage today/organization does not employ this best practice) to 5 (Best practice is fully adopted). The responses of those who gave a "5" rating were compared with the responses of those who gave a score of "1" (lower end of benefit) or "3" (higher end of benefit). Source: 2nd ISCA Productivity Scorecard and Benchmarking Survey Report

Not just for Singapore

The study draws a direct line between adoption and such benefits as lower SG&A expense, lower audit costs and lower receivables overdue, but of course simple adoption does not automatically translate into gains.

Other factors also figure in the equation, including how powerful and easy to use the technology solution is, buy-in from finance and other parts of the organization and effective change management for people and processes.

Still, this study is a valuable resource not only for CFOs in Singapore but everyone else in Asia. Some may not be convinced that the global benchmarks are applicable to the region (although 27% of the companies in the SAP database are in Asia Pacific, with 41% in North America, 21% in Europe, Middle East and Africa and 11% in Latin America and Caribbean).

But these numbers at least give a general idea as to where your global competitors are in the continuum of effectiveness and efficiency – and should suggest ways for your organization to improve its performance now and in the future.

About the Author
Cesar Bacani is Editor-in Chief of CFO Innovation.