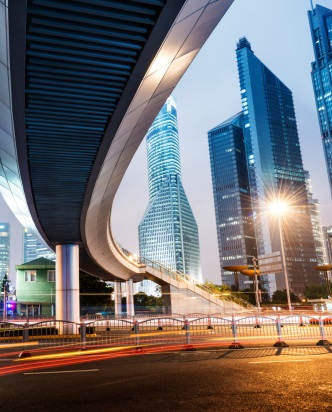 When CFO Innovation asked Thomson Reuters to look at the more than 30,000 Asia-headquartered listed companies in its database and generate the Top 100 list according to sales, we expected Japanese companies to predominate.
That turned out to be the case – but not to the extent that we had expected. There are 44 Japanese enterprises in the Top 100 compared with 22 from China. But the top two corporations with the largest sales are Chinese, not Japanese.
No. 1 is China Petroleum & Chemical, also known as Sinopec, with total revenues of US$438.8 billion, and No. 2 is PetroChina with US$352.4 billion. Third is Japan’s Toyota Motor with US$234.7 billion, followed by South Korea’s Samsung Electronics (US$187.8 billion).
In total, the 44 Japanese companies in the Top 100 list have combined revenues of US$2.4 trillion – that’s as big as the GDP of the United Kingdom. The combined sales of the 22 Chinese enterprises come to US$2.1 trillion, just 15% smaller (see table below).
JAPAN STILL LEADS, BUT CHINA IS CATCHING UP 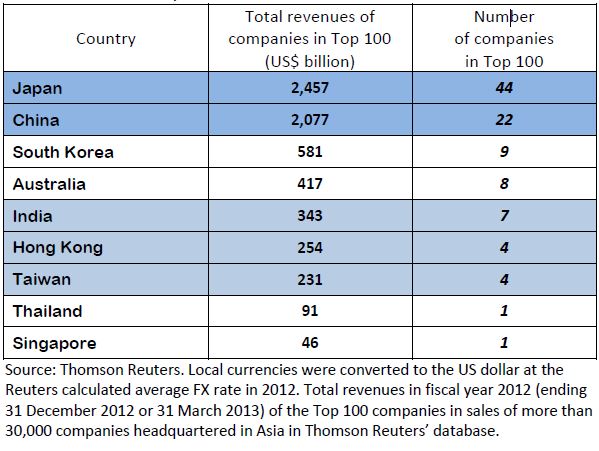 All of this is by way of saying what has been long evident: China is fast closing the gap with Japan. Indeed, according to the World Bank, China’s GDP, at US$8.2 trillion, is already bigger than Japan’s US$5.9 trillion. And where the economy goes, companies usually follow.
It would be interesting to see what 2014 will hold for the world’s second- and third-largest economies, as well as for Hong Kong, India, Singapore and the rest of ASEAN – and what opportunities and challenges the current and 2014 macro-economic environment will present to Asia’s companies.
Stagnant Sales
The Thomson Reuters database yields many interesting nuggets. In 2008, when the global financial crisis started, the revenues of the more than 30,000 Asia-headquartered listed companies Thomson Reuters tracked totaled US$13.7 trillion. Despite the turmoil, however, Asia’s companies managed to limit the damage – the next year, combined sales increased slightly by 2% to US$14 trillion.
The region fully recovered in 2010, as sales shot up 23% to US$17.2 trillion, along with net profits, which totaled US$1 trillion, up 68% from 2009.
But sales and profits appear to have stalled last year. Total sales of US$19.6 trillion is only 3% larger than in 2011 – even as profits fell 1% to US$1 trillion in the same period (see chart below).
Click image to enlarge
BACK FROM THE CRISIS, BUT SALES NOW STALLING 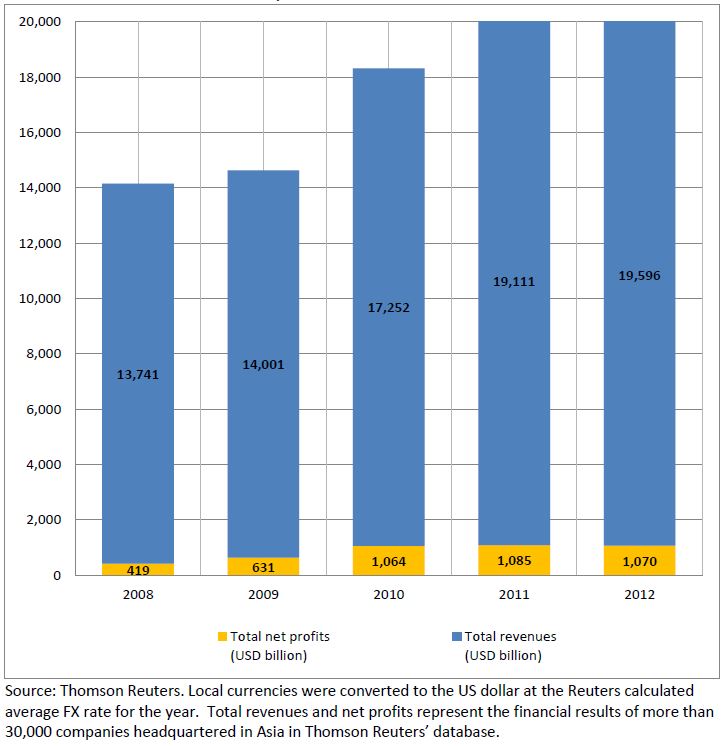 The question now is how accommodative the macro-economic environment currently is, and the likely scenario in 2014 – and how agile the Top 100 companies will be in making the most of opportunities and in tackling the challenges.
Signs of Renaissance
China had been a worry earlier in the year as key data points, including exports, industrial production and purchasing managers’ indices, pointed to a slowdown that could turn into a hard landing. But recent data had surprised to the upside, leading many economists to upgrade their forecasts for China.
Bank of America Merrill Lynch, one of the more respected economic forecasters in the region, recently upgraded its 2013 GDP forecast for China to 7.7% – the consensus forecast is 7.5% – and expects growth to reach 8% in the first half of 2014.
However, its crystal ball gets cloudier in the second half next year. In a 12 September report, Bank of America reiterated its reading that the more encouraging data in the third quarter is “a cyclical bump up in what still remains a structural downtrend.”
Going forward, there is considerable optimism in Japan as well. The Cabinet Office, which handles the day-to-day affairs of the cabinet, has revised its estimate of real GDP growth for the April-June quarter to a seasonally-adjusted and annualized 3.8%, from 2.6%.
“The revision reflects a strong increase in private investment, increased corporate confidence in Japan’s economic prospects and greater traction for Prime Minister Shinzo Abe’s economic policies,” says Tom Byrne, Senior Vice President at credit ratings agency Moody’s Investor Service.
But as in China, there are caveats. “The long-term health of Japan’s economy requires an effective growth strategy,” Byrne adds. “This will likely require supply-side measures, deregulation and labor market reforms that have yet to be fully articulated, let alone passed into law by the Diet [Japan’s Parliament] and implemented in the budget.”
Asia’s Behemoths
In other words, the CFOs and other executives of Asia’s Top 100 enterprises (and the 30,000 or so in the Thomson Reuters database) must be aggressive in leveraging on the opportunities being thrown up by the current economic recovery – but also be measured and cost-conscious while the 2014 picture remains unclear.
So which organizations are in the Top 100? The list of Asia’s giants starts below:
Click image to enlarge
ASIA’S TOP 100 COMPANIES IN SALES (1-35) 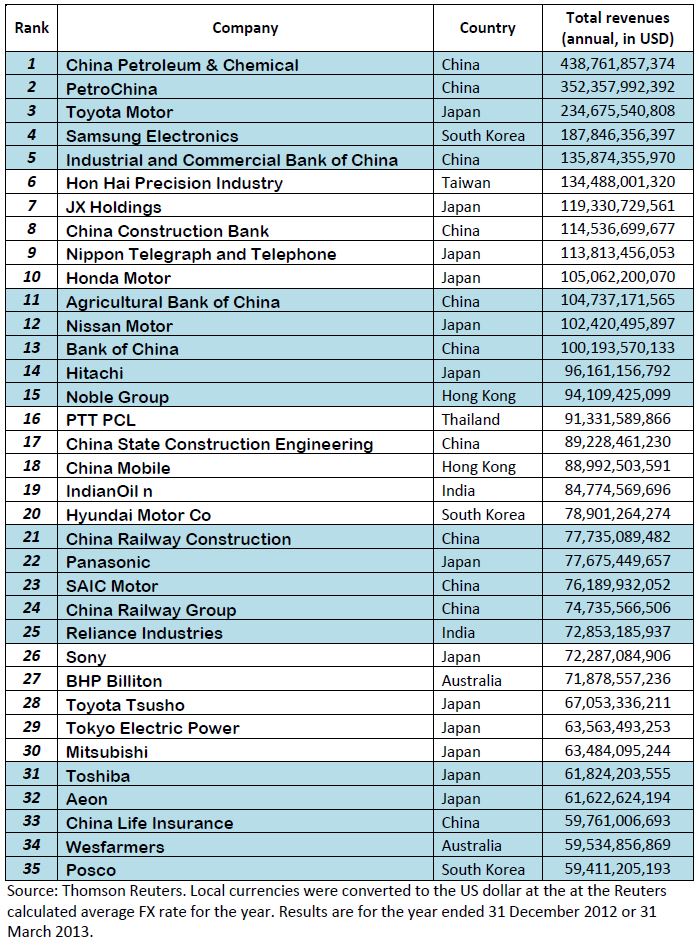 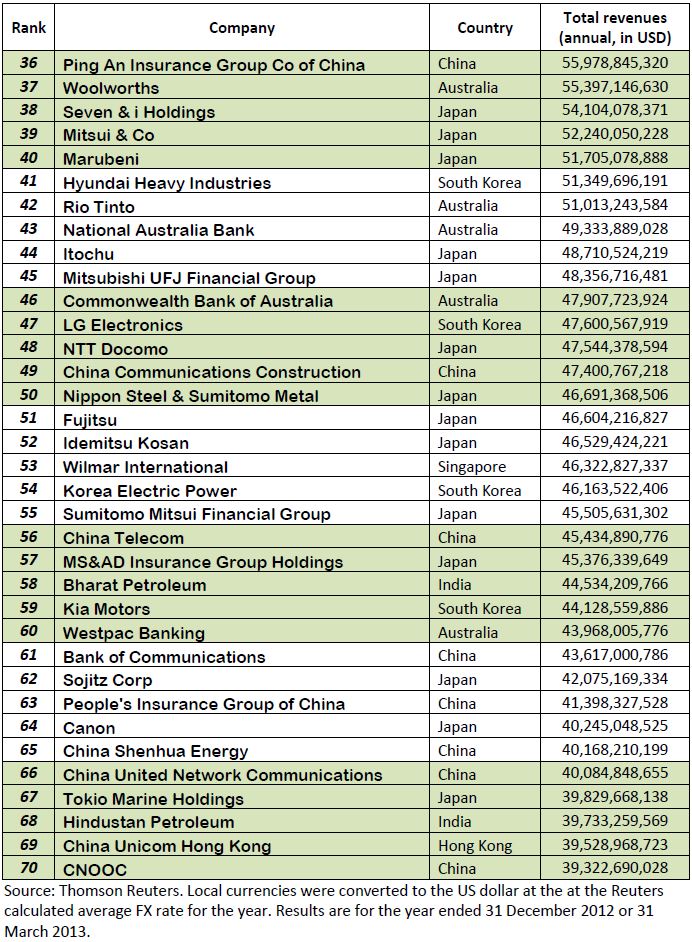 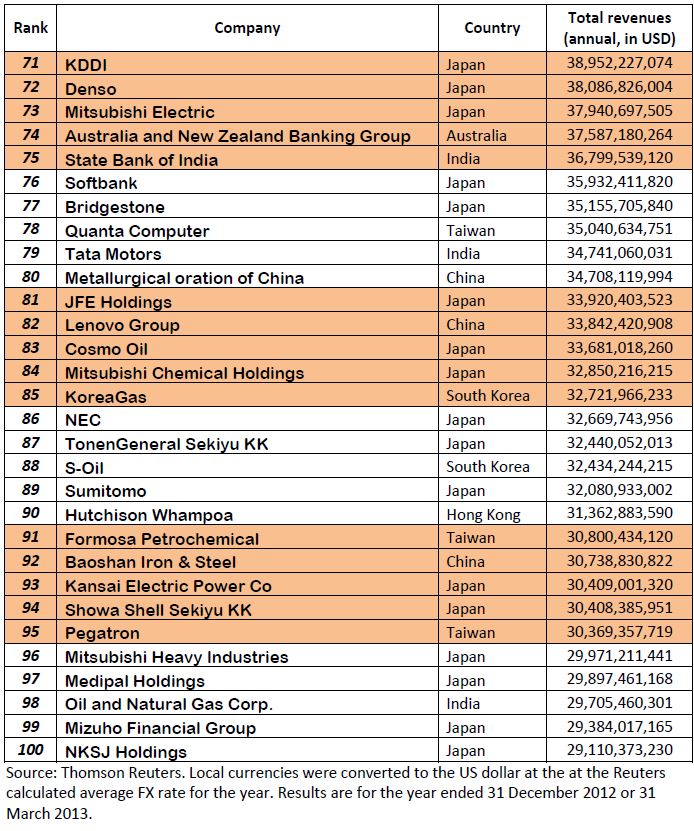 What About Profits?
That Sinopec and PetroChina lead the Top 100 is not surprising. China’s appetite for energy is seemingly boundless and the two state-controlled giants have been acquiring assets abroad at a blistering pace. PetroChina has been caught up in the new political leadership’s crackdown on corruption, but it seems unlikely the business will be allowed to be affected financially.
In any case, No. 3 Toyota Motor’s sales are a third smaller than PetroChina’s, meaning that it has a long way to go to catch up. That said, Toyota reported a 13.7% increase in revenues in yen terms in the quarter ended 30 June 2013, the first quarter for fiscal year 2014. Net income nearly doubled to 562.1 billion yen, driven by currency fluctuations, cost reduction and marketing activities.
Interestingly, Toyota Motor is ranked only No. 10 when the Top 100 companies are sorted according to net profits. Indeed, the biggest in sales China Petroleum & Chemical comes in only No. 9 in profits while No. 2 PetroChina is No. 8.
The most profitable Top 100 enterprises are the banks – fifth-ranked in sales Industrial and Commercial Bank of China is No. 1 in net profit, followed by China Construction Bank, Agricultural Bank of China and Bank of China. Of the 35 most profitable companies, a third are financial institutions (see table below).
Click image to enlarge
SALES DO NOT ALWAYS LEAD TO TOP GAINS 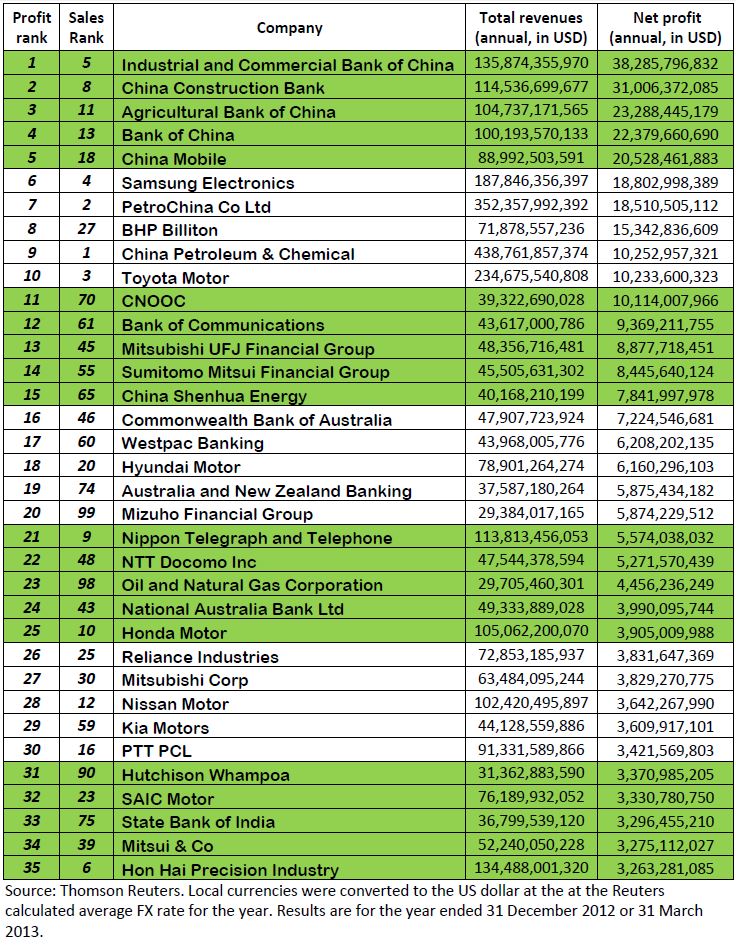 A Peek at 2014
What’s in store in 2014? While most analysts are cautious, at least one bank has jumped over to the optimistic camp. ABN AMRO Private Banking has just trimmed cash holdings in its balanced model portfolio to 9% (from 14%), and increased the allocation to equities to 44% (from 40%).
“The most interesting aspect of the current situation is not the potential impact of possible changes in US Federal Reserve policy, but the underlying forces of accelerating, self-sustained global economic growth,” says Didier Duret, the bank’s Chief Investment Officer.
“We prefer markets such as China, South Korea, Japan and Taiwan that are more leveraged to export to the developed economies and which are running current-account surpluses,” adds Daphne Roth, Asia Equity Strategist. “On the other hand, we continue to avoid markets that are running current-account deficits (India, Indonesia and Thailand) as the liquidity cycle has turned due to QE tapering.”
To read more articles like this, sign up for our three-times-a-week newsletter by clicking here.
In terms of sectors, ABN AMRO Private Banking is overweight in oil services, chemicals, commercial services, capital goods, consumer services, and automobiles & components. It is underweight in consumer staples and food, beverage & tobacco on valuation grounds.
One swallow does not a spring make, but this early prognostication should provide a bit of comfort to CFOs of Asian exporters, including the region’s Samsungs and Toyotas as well as the Sinopecs and PetroChinas.
But as always, ramping up production and sales efforts should be leavened by prudent cost management and efficiency and productivity gains, as well as accurate forecasting in the near and medium term. The current signs of a global economic renaissance can easily wither on political and policy miscalculations and other external events.
About the Author