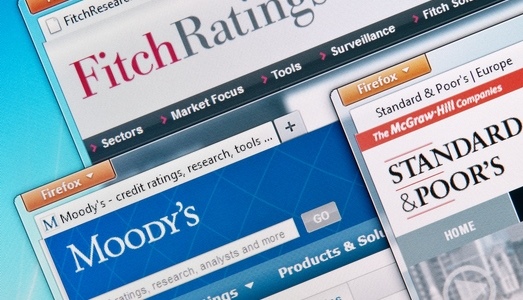 China's credit-rating outlook was lowered to A1 from Aa3 by Moody's Investors Service. While China’s domestic markets hardly reacted to the downgrade (at least after the necessary government intervention), we think this is a relevant event for China credit – and it will be even more so if a second international rating agency follows Moody’s.

The agency also downgraded Hong Kong's credit rating to Aa2 from Aa2. Moody's key reason for the downgrade is simply its ties with the Mainland. Hong Kong coporates and banks could be next, and perhaps even Taiwan and major UK banks.

On China, the action should come from the offshore credit market, as the onshore one is obviously more insulated from international ratings. But foreign investors hold less than 2% of total onshore bonds, so their reaction will have only a muted impact on credit spreads (see chart below). 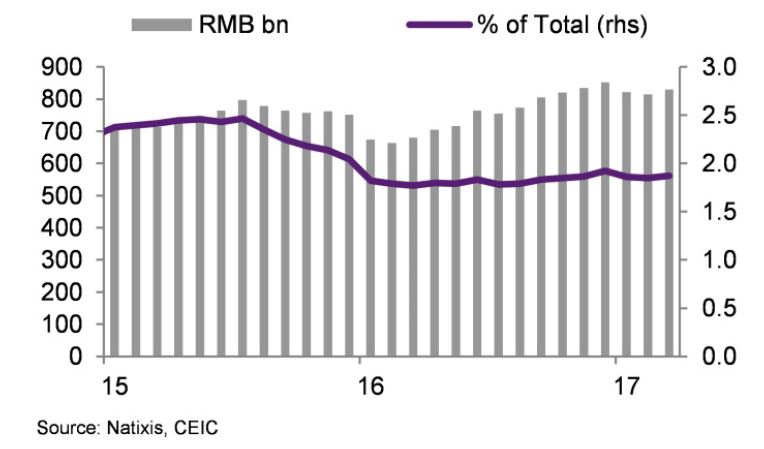 Second, as most transactions are done in the interbank, large state-owned banks can always help stabilize sharp price movements. Still, the downgrade does not bode well for a surge in portfolio inflows through the recently announced Bond Connect with Hong Kong.

The cycle of Greater China downgrades may have only just begun, so please, tighten your seatbelts!

Switching to the offshore market, the downgrade may slow the rapid increase in offshore issuance by Chinese corporates this year. Chinese corporates have issued foreign currency bonds amounting to US$10.1 billion until end March in 2017, equivalent to 78% of last year issuance (see chart below). 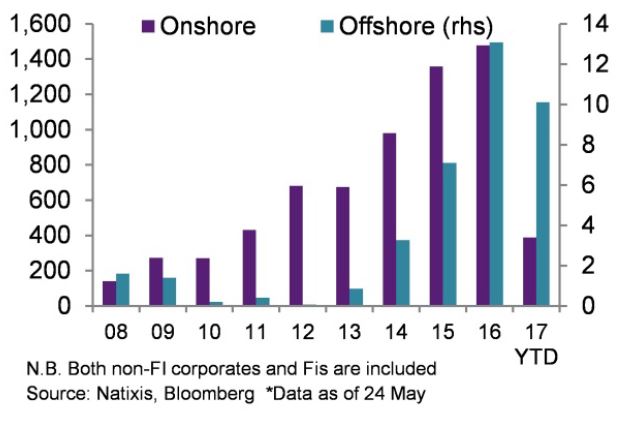 Beyond that, the question is whether some will suffer an amplification of the downgrade.

This argument [of downgrading Hong Kong because of its ties to China] could even be made for HSBC and Standard Chartered Bank, whose revenues are heavily concentrated in Greater China

We argue that the most likely to be downgraded beyond one notch are highly leveraged corporates (many of which are real estate developers). This is because Moody’s key reasoning for the sovereign downgrade is the country’s rapid accumulation of debt.

We would also expect harsher treatment for private companies than state-owned enterprises.

We do not anticipate implications on the banks, at least for the largest state-owned commercial banks, due to their relatively healthier situation compared with other banks.

However, joint stock commercial banks (JSCBs) and city commercial banks (CCBs) exposed to the offshore market may face a downgrade because of their more fragile financial health and the exposure to shadow banking.

The impact of the Moody’s downgrade on China’s domestic markets will be limited, although it may further discourage foreign investors from entering the market. However, we expect higher funding cost in the offshore market, especially for higher leveraged corporates.

We also expect more reaction for smaller banks exposed to the offshore market than the larger ones. All of these considerations hinge massively on a second international rating downgrade following Moody’s.

As for Hong Kong, Moody's key reason for the downgrade is simply its ties with the Mainland. No account seems to have been taken of Hong Kong's massive international reserves (US$396 billion) and sound fiscal condition, let alone the government's close-to-nil foreign debt (US$4.2 billion).

On that basis, Moody’s rationale for downgrade (i.e., dependence on the Mainland) is likely to be applied soon to some Hong Kong’s corporates, especially those more dependent on China.

Such link is not only indirect (as for the Hong Kong government) but direct, through investments in the Mainland - with the real estate sector being clearly one of the many examples. Hong Kong banks themselves also suffer from a direct exposure through cross-border lending, which for some is quite massive.

This argument could even be made for HSBC and Standard Chartered Bank, whose revenues are heavily concentrated in Greater China. When push comes to shove, even the Taiwanese sovereign could be downgraded as its economy is still heavily reliant on the Mainland in terms of exports, investment and even tourism.

This is, however, a longer shot both based on past experience (Moody’s did not lower Taiwan’s outlook to negative after China and Hong Kong’s outlook downgrade back in March 2016) but also on Taiwan’s government strong will to diversify away from China.

In a nutshell, the cycle of Greater China downgrades may have only just begun, so please, tighten your seatbelts!

Natixis is the second-largest banking group in France. This article is excerpted from two issues of China Hot Topics, issued on 24 May 2017 and 25 May 2017, and was re-edited for clarity and conciseness.