2017 CFO of the Year Awards: Superhero CFOs Crash the Party 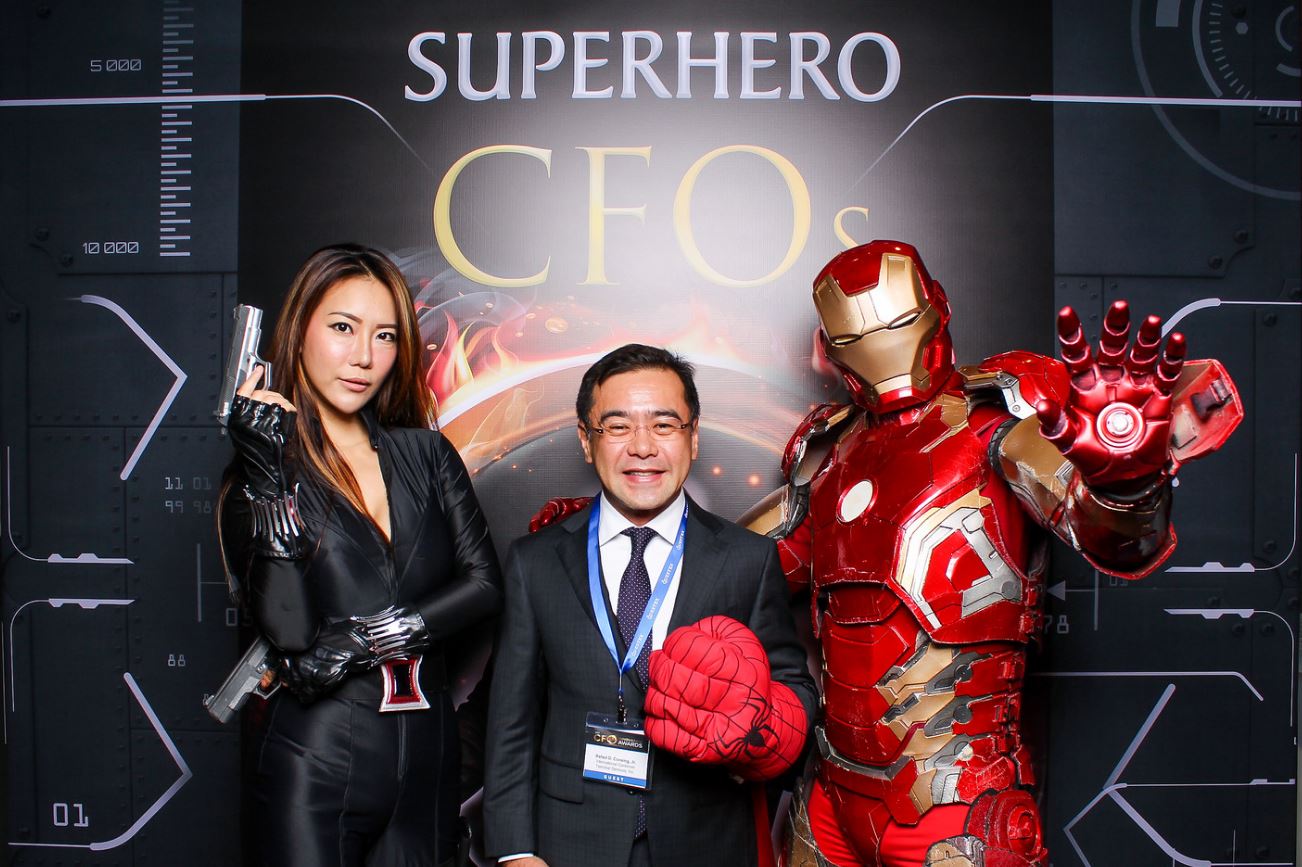 Five finance leaders were honored at the 2017 CFO of the Year awards during a superhero-themed dinner gala in Singapore on December 7. Now on its sixth year, the 2017 celebration was attended by more than 120 CFOs and other guests, including representatives from accounting firms, banks, business software companies, consulting firms, outsourcing providers and other finance partners.

And the honorees are:

You need to manage numerous moving parts when your company embarks on a massive geographical expansion, as the Philippines’ International Container Terminal Services is doing. From late 2010 to 2016, the number of operating terminals in ICTSI’s portfolio jumped from 14 to 25 as it acquired new concessions and completed construction projects in Argentina, Australia, Colombia, Democratic Republic of Congo and Iraq.

The task of steering the financial ship through unfamiliar foreign waters fell on CFO Rafael Jose D. Consing, Jr. (pictured above with Black Widow and Iron Man). His challenges included supporting the acquisition and integration of the geographically dispersed assets, managing the accounting transition and financial and leverage impact, and keeping investors interested in the stock through anemic financial results as the portfolio transitioned to the current global footprint.

Consing’s first move was to design a capital management strategy that aimed to reduce the cost of debt and extend call durations. He orchestrated tender and private exchange offers for expensive debt that carried interest rates as high as 8.375% , using proceeds of perpetual securities and notes borrowed at 4.875% to 6.25%. The cost of debt was reduced by US$5.5 million per annum and call durations were stretched by three to five years.

Then he raised funds for the various port constructions by issuing hybrid capital, which helped mitigate the impact of borrowings on leverage ratios. The use of hybrid capital was meant to deliver the full benefits of both debt (non-dilutive to shareholders plus tax deductible cash distributions) and equity (upon consolidation under IFRS, hybrid bonds are accounted for as shareholder capital and therefore carved out in the calculation of leverage ratios).

The company also tapped commercial borrowing and project finance facilities, including a first-ever US$40-million term loan facility by a Philippine bank to an Ecuadorian entity, which lowered that subsidiary’s funding cost by 5%, and a US$260-million facility with the World Bank’s IFC, Inter-American Development Bank, and China Co-Financing Fund for Latin America and the Caribbean – at a spread of 2.8%, on average, above 6-month LIBOR.

A critical aspect of the financing strategy was the creation of a Euro-Medium Term Note Program and a Global Loan Program, which aligned and pre-negotiated the terms of all loans and bond issues. This helped shorten transaction execution time to five days, from two to three months, and gave ICTSI the ability to seize market windows of opportunity.

In bank loans, Consing negotiated a shift from maintenance covenants to incurrence-based covenants, meaning that the company will not be declared in default in case of a breach, but will simply be cut off from future borrowings. The covenants have not been breached, but finance is comforted by the thought that if they are, the company can focus on turning the business around rather than fight off the banks from taking over the business.

The aggressive expansion and associated debt took a toll on financial performance. The CFO and finance team focused investor relations efforts not only on equity stakeholders, but also on bondholders, creditors and other parties. They were all kept fully updated on what was happening, with the aim of managing interim earnings headwinds in the interim years.

Philippine-listed ICTSI’s stock price remained largely buoyant, notching a rise of 21.5% over the past two years, and 44.5% year-to-date. And the years of sub-par financial performance are over as the new port terminals start operations. Revenues have risen 114% to US$1.1 billion from 2010 to 2016, with recurring income surging a steeper 131% to US$203.4 million.

It’s a handsome return on a risky and aggressive expansion, and one that has been made possible by astute financial management.

Led by Group CFO Janelle Hopkins, logistics giant Australia Post embarked on a ‘disrupt from within’ finance transformation in 2015, in response to anticipated changes from artificial intelligence, robotics, digital assistants, Internet of Things and the explosion of data. The objective is to capture opportunities created by data to drive value for customers and stakeholders, while investing in the finance team to prepare them for the future way of working.

In Phase 1 of the project, Australia Post benchmarked its finance function against its peers and then established business partner capability, centers of excellence in planning, reporting, finance information, superannuation, taxation and treasury, a group finance capability and shred services for AP, AR, payroll and other transactions. It also invested in new infrastructure that capture granular data in real time and is securely accessible on any device.

In Phase 2, the company established the Extended Leadership Team program for all people leaders and influencers within finance, the MyFinance Career Online interactive portal that provides competency-based learning based on the finance team member’s chosen career path. Australia Post also created iPortal, an information marketplace for periodic report distribution, replacing email, and ThinkTank, a pipeline tool that captures ideas generated by finance professionals to improve revenue or margin and to reduce cost.

In Phase 3, the company invested in insight and intelligence tools that are made available on iPortal. These include iAnalyse, which allows independent data mining of the granular datasets to discover opportunities for revenue, cost or margin value. Another initiative is the creation of a dedicated data science team that applies artificial intelligence, machine learning, predictive modelling, robotics and other advanced technologies to large, converged datasets.

Among the early outcomes is A$50 million created from ThinkTank ideas. Ninety reports are no longer produced because no one on iPortal uses them. The expectation is that 75 digital reports will eventually replace more than 650 Excel and PowerPoint reports currently in circulation. For the final phase of finance transformation, Hopkins and her team are preparing to completely reimagine the finance function using robotics, artificial intelligence and data.

Finance transformation can be complex and arduous, particularly for a company with a large finance organization. Australia Post demonstrates that it is possible to achieve success relatively painlessly with a well thought-out, methodical and multi-stage approach that places as much emphasis on human infrastructure as it does on transformative technologies.

By pursuing changes in a heavily regulated company like DBS Hong Kong, Chan has shown that technology-driven finance transformation is not necessarily inconsistent with statutory and regulatory compliance

Transforming the finance function of a bank is a fraught exercise in an evolving regulatory environment. But that is not stopping Jacqueline Chan, CFO at DBS Hong Kong, which accounts for more than 20% of the Singapore-based banking group’s net profits. She has embraced change as a key focus of her tenure – but is also ultra-careful about compliance with statutory and regulatory requirements, which are changing themselves.

Change Management makes sure everyone in finance and their business partners are invested in the project and their questions and concerns are addressed. The brief is clear: leverage digital technology in transforming finance, with the goal of addressing stakeholders’ demand for access to the right information at the right time to make the right decisions – while ensuring a high standard of statutory and regulatory compliance.

Investments have been made on digital solutions, enhancement of data quality and streamlining of reporting processes. Robotic Process Automation is now in production after building in-house skillsets, completing proof-of-concept and determining the new operating model. The resources freed from automation have been redirected in part to a Center of Excellence tasked with data service, baseline analytics, and management of report standardization and delivery.

Data scientists and modelling specialists have been recruited into a centralized task force that works closely with the line functions to address the finance team’s specific pain points. A new centralized system has also been created to focus on compliance with Hong Kong’s new and changing regulations, alleviating the operational burden on the bank’s month-end processes and shortening the record-to-report cycle.

The finance team has been empowered to influence business performance and generate value with various analytics tools, such as an integrated digital value analytics mechanism that captures the financial contributions of the bank’s digital and traditional businesses in the consumer and SME space. An expense dashboard extracts and crunches finance and non-finance data across the bank to provide cost trend analysis, impact analysis and staff claim analysis.

By pursuing changes in a heavily regulated company like DBS Hong Kong, Chan has shown that technology-driven finance transformation is not necessarily inconsistent with statutory and regulatory compliance. What is required is a focus on change management, sensitivity to pain points and unintended consequences, and judicious adoption of technology solutions.

This basic transformation, including automating financial reporting, has now been completed. Finance now has the time and talent to focus on FP&A, a process that was also centralized in Malaysia. With near-real time access to data across the group’s entities in ten countries, the finance function generates quarterly rolling forecasts that are cascaded down to business heads.

The forecasts highlight the gaps between current and expected fiscal-year revenues and earnings, allowing business units to adjust and tailor their strategic and tactical initiatives to reach their goals. They also identify and assess key performance metrics to help business heads measure financial performance against the broad market.

The FP&A team’s insights help with managing foreign-exchange exposures as the ringgit gyrates against the US dollar and other currencies (the company has a presence in the ASEAN-6, Hong Kong, India, UK and the US). Its work also informs the Strategic Cost Management project, which has resulted in RM30 million (in 2016 cost savings and led to the disposal of non-core assets.

These outcomes once again demonstrate the power of planning and analytics to transform and optimize, and the ability of a CFO to make a difference.

Entrusted with both finance and IT functions, Knight worked closely with a newly appointed IT manager to transform outdated systems

When an organization’s mission is a social good like education, financial and operational performance tend to be downplayed. In 2016, when Graham Knight joined Thailand’s Satit Bilingual Schools of Rangsit University, a decade of a short-term, random approach to technology adoption was showing up in monthly financial reporting cycles that took up to eight weeks to complete, inaccurate data, and unreliable databases.

Entrusted with both the finance and IT functions, Knight worked closely with a newly appointed IT manager to transform outdated systems. As an interim solution, a bespoke reporting application using MS PowerPivot was developed that generates a monthly profit and loss, balance sheet and cash flow report integrating data from the Bangkok and Chiang Mai campuses.

The reporting tool is able to extract monthly trial balance data to automatically reconcile accounts in statutory and management formats in near real time. Quarterly and annual comparisons and reports no longer require manual effort, helping reduce the monthly reporting cycle from two months to three weeks – still too long, but a significant improvement.

The PowerPivot application is integrated with reporting dashboards rolled out by the finance team from Microsoft’s PowerBI and other applications, allowing the creation of KPIs and ratios such as revenue per student and salary costs percentages. Available on the web and on mobile devices, the dashboards are automatically updated three times a day.

It’s still a work in progress, but the early fruits of this technology transformation prove that a CFO working closely with IT can take advantage of advances in cloud-based capabilities and affordability for the betterment of the entire organization.