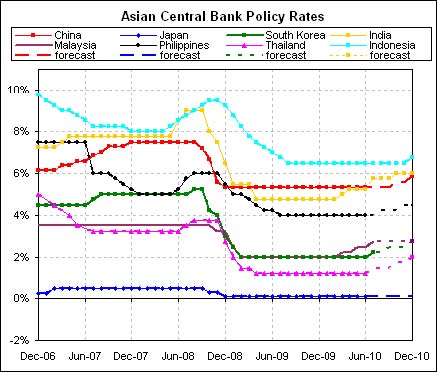 Central banks in Korea, Malaysia and Thailand raised interest rates in the past two weeks, joining other recent tightening by central banks in India, Taiwan and Australia. We view this as a vote of confidence that Asian economies will continue to pace the global rebound, weathering any drag from the European debt crisis.

Conspicuous in their absence are Japan and China, the two largest economies in the region, which have yet to raise rates. The Bank of Japan is widely expected to maintain its overnight rate at near-zero indefinitely in the face of lingering deflation.
The People’s Bank of China represents perhaps the biggest question mark, having refrained a little longer than originally expected from tightening rates, but taking other steps to rein in money and credit growth. On another front, last month opened the door for gradual FX appreciation of their currency. We see China as likely to begin raising interest rates sometime during the second half of this year.