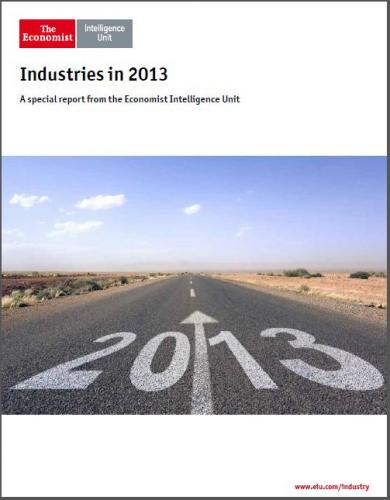 This EIU report makes a number of predictions about developments in our six key industries - Automotive, Consumer Goods and Retail, Energy, Financial Services, Healthcare and Telecommunications.
It surveyed 405 executives worldwide in November 2012 on their expectations for business conditions in 2013. They work in organisations of varying sizes, with 53% earning annual revenue of US$500m or more.
Key Findings:
Automotive:
The global auto market should become less volatile in 2013.
Vehicle-makers will still be under pressure to respond to the long-term shift away from Western Europe. Next year, the region will account for just 17% of global car sales, down from over 25% just five years ago.
Asia will account for 43%, up from under 30% in 2008.
Consumer Goods and Retail:
Fears persist that 2013 will bring more of the same as bankruptcies and bearishness continue to dominate.
The biggest buzz in 2013 will surround China and India. In 2013 China could complete a hat trick of becoming the world’s largest e-commerce market, the world’s largest grocery retail market and the world’s largest luxury goods market.
Energy:
Global energy consumption will grow just 3%, a full 1.4 percentage points slower than the stimulus-driven rate in 2010.
Financial Services:
The industry will be touched by innovations and reforms in 2013.
The Basel III standards, which officially launch in 2013 and get tougher through 2018, will force global banks to hold more base capital, and better forms of capital such as equity and retained earnings.
Healthcare:
The rapid ageing of populations will carry on pushing up healthcare expenditure.
Total spending in dollar terms slowed sharply in 2012 after its recovery in 2010-11, but we expect 2013 to bring another acceleration, with year-on-year growth of 4.8% in the 60 countries that make up our global forecast. Global pharma spending, meanwhile, will rise by a forecast 5.4%.
Telecoms:
Mobile data traffic alone is doubling every year, according to Ericsson, and is forecast to reach more than 1,000 petabytes by the beginning of 2014.
Coping with this reality will drive most major sector developments in the next 12 months.