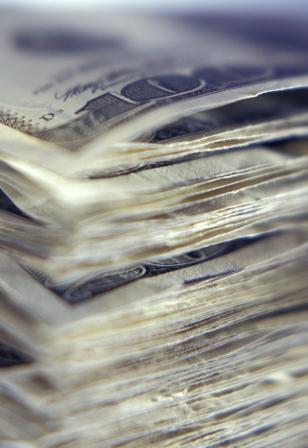 Sovereign debt troubles in Europe have led to rumours that holders of foreign exchange reserves could shift out of euro-denominated securities, which would lower the euro’s value dramatically and compound European countries' troubles in financing their debt. Asian officials in charge of foreign reserves have insisted no such shift will happen, but there would be potential benefits if Asian countries such as China accumulated reserves more slowly.
Asia holds the biggest proportion of the world’s foreign reserves, and they have surged in recent years. Asia's nine biggest reserve holders collectively hold around US$5 trillion of the world's $8.4 trillion in foreign reserves. China holds the most and accounts for most of the growth in reserves, but reserves have also grown from a low base in other countries. Moreover, these official reserves exclude those held by sovereign wealth funds and, in the case of China, by state banks and companies.
Asian countries' main rationale for accumulating foreign reserves is safety. After the 1997 financial crisis, Asia began building substantial foreign reserves as an insurance policy, and despite Asia’s rapid development and improved regulation and economic policy since then, reserves are still helpful in times of market uncertainty.
South Korea used a quarter of its reserves in 2008 to supply liquidity to firms that had borrowed in dollars and needed to roll over loans. The governor of the Bank of Korea recently stated that South Korea’s foreign reserves, the sixth largest in the world at US$279 billion in April, are still inadequate.
Given this risk aversion, it is conceivable that countries will reallocate their portfolios away from the sovereign debt of some European nations. The Bank of Korea has noted that the debt of some European nations lowers the euro's attractiveness as a reserve currency, although that view has been countered by Chinese officials.
However, a shift into dollars would re-concentrate risk. Although Asian foreign reserve funds began shifting away from the dollar and towards the euro around 2003, dollar holdings remain the biggest portion for most countries; an estimated 70% of China's reserves are dollar-denominated. Despite their desire to diversify away from the dollar and Europe's debt problems, Asia's foreign exchange managers have few options that could accommodate the large amount of reserves their policies generate.
What to do with all this money?
Slower accumulation of foreign reserves would be a positive development for the world economy. A sustainable global recovery is likely to require stronger Asian currencies and weaker currencies in the developed world, which would raise net exports in the U.S. and Europe and cool inflation pressures in Asia.
Assertions that Asia's foreign reserves are far higher than necessary find support when measured by traditional means such as the ratio of reserves to months of imports or reserves to percentage of external debt liabilities. Clearly, countries have a second reason for the build-up: keeping their currencies stable to promote exports.

China’s Ministry of Commerce has been resisting pressure to let the yuan appreciate, citing studies that conclude many exporters would become unprofitable if the yuan were to rise just 1% against the dollar. Yet, this claim is at odds with the rising share of overall corporate profits in the economy, which has risen at the expense of household incomes.

Weaker household income growth has hurt consumption. China's savings have been driven by corporates, not households. This is a key issue that needs to be addressed if China is to switch its growth driver from exports to domestic demand.
Solutions
One solution would be to first slow the gains in reserves and invest domestically. This would mean tolerating currency appreciation, which would dampen net exports but need not mean a slowdown in economic growth if accompanied by increased investment and measures to boost consumption. In this way, net savings could decrease in a manner conducive to growth.
It seems odd to advocate higher investment in China, given the amount of investment that has already taken place over the past 18 months. But China is still a developing economy, with GDP per capita of around US$4,000. Increased capital investment will make the labour force much more productive.
Also, much of the past investment has been wasted: the Chinese economy is notoriously inefficient in its capital investment, partly due to the nonmarket-based methods of capital allocation. The burst of investment in 2009 and early this year will almost certainly lead to a spike in non-performing loans in a few years. Moving the banking system towards a market-based lending and investment regime would reduce the number of non-performing loans and allow a greater level of investment.
On the other side of the coin, boosting consumption would lower savings and provide room for the currency to appreciate. In China's case, many structural factors favour investment over consumption, essentially subsidizing corporations at the expense of households. For instance, low deposit and lending rates penalise households and reward borrowers, typically state enterprises. The cheap currency makes exports competitive but raises the cost of imports, lowering real wages. The government helps favoured companies and industries and keeps the price of energy low, but spends little on social services.
Reversing these policies would lower corporate savings and help shift the economy towards a consumption-driven model. For instance, if profitable state enterprises were compelled to pay dividends rather than save their income, the government could use the funds for welfare payments.
About the Author
Alaistair Chan is an associate economist in the Sydney office of Moody’s Economy.com.
Read more on
credit management