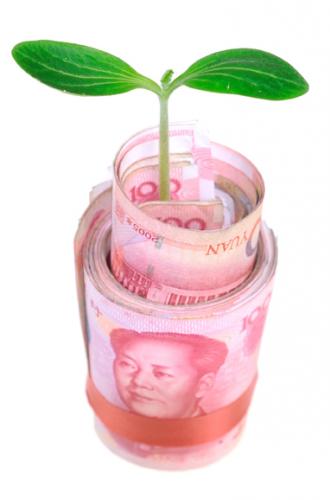 Economic growth in China eased in Q4 2013. GDP growth eased from 7.8% yoy in Q3 to 7.7% yoy in Q4, in line with our forecast and somewhat stronger than the Bloomberg consensus forecast of 7.6% yoy (Table 1).
Click image to enlarge
Table 1: Headline Data

Source: CEIC, RBS
According to our estimates qoq growth decelerated from 9.4% saar in Q3 to around 9% saar in Q4 (Figure 1).
Click image to enlarge
Figure 1: Quarterly GDP Growth

Source: CEIC, RBS
The slowdown in Q4 was caused by decelerating investment growth. Growth of what we consider largely credit-based investment – in infrastructure and real estate – has eased since June 2013, alongside the deceleration of expansion of total social financing (Figure 2).
Click image to enlarge
Figure 2: Credit-Based FAI and Total Social Financing

Source: CEIC, RBS
Growth of investment in manufacturing picked up in H2 2013, but seems to have lost momentum towards the end of 2013, although growth was somewhat better in December than in November (Figure 3).
Click image to enlarge
Figure 3: Corporate FAI and Profits in Industry

Source: CEIC, RBS
The slowdown was dampened by stronger export growth. Goods export growth rose from 5.2% in Q3 to 8.6% in Q4, in real terms, in our estimate.
The trend towards better export growth is taking place in reality, in our view, rather than because of over-invoicing (see Trade data remains constructive, 10 January 2014).
We think it reflects a recovery in global demand, even though that recovery is not yet mature.
Consumption Remains Strong
Consumption momentum remained steady in Q4, supported by steady household income growth on a resilient labour market.
Retail sales—the imperfect but high frequency indicator on consumption—held up well through December in real terms.
The monthly data for December suggests a slowdown within Q4. Industrial production growth slowed from 10.3% yoy in October to 9.7% in December.
Export growth slowed in December, after the strong showing in November while nominal fixed asset investment (FAI) growth decelerated from 19.4% yoy in October to 17.1% yoy in December.
As noted, nominal retail sales growth held up throughout Q4; it was 13.6% in December, in line with Bloomberg consensus.
Taking a Step Back: Some Medium-Term Trends in the Annual Numbers
GDP growth in 2013 as a whole was 7.7% in 2013. While this is the same as in 2012, it is lower than our estimate of potential GDP growth.
In line with some increase in the amount of slack in the economy that this implies, prices remained subdued, especially in the industrial sphere.
The pattern of growth saw some rebalancing along several dimensions
Import growth exceeded export growth, in real terms. But in terms of the contribution to growth, this was offset by a higher base for exports.
In spite of the broadly neutral contribution of net trade to growth in real terms, the trade surplus in USD terms widened in 2013 as import prices fell more than export prices.
Helped by more favourable output price developments in services as factory gate prices continued to fall in industry, the share of the tertiary sector in the economy shot up 46.1% in 2013, exceeding that of the secondary sector for the first time since 1961 (Figure 4).
Click image to enlarge
Figure 4: Shares of GDP: Primary, Secondary and Tertiary Industry

Source: RBS
However, household consumption growth probably lagged investment growth in 2013, reversing a tentative trend.
The share of private consumption in GDP, which had been on a relentless decline since the late 1990s, troughed at 34.9% in 2010.
Reflecting some first signs of progress with rebalancing of the pattern of growth, it rose to 36% in 2012.
However, boosted by another credit-based stimulus effort, investment growth exceeded consumption growth again in 2013.
It will still take quite a while before the official data for 2013 is out, but based on the quarterly national accounts and household survey data, we estimate that the share of household consumption in GDP probably fell again in 2013.
The Outlook for 2014
In the coming months, we expect the composition of growth to be along the lines of that in Q4 2013, with export growth benefiting from the—not yet mature—global recovery, growth of credit-based investment affected by the firmer monetary stance and consumption momentum relatively stable.
The significant pick-up in growth of processing imports in December may herald a rebound of processing exports in early 2014, but the recovery of global demand does not yet seem fully entrenched.
Meanwhile, it is possible that the slower growth of normal imports—used in China’s own economy—in the last two months of 2013 reflects some impact of a firmer monetary stance and slowing investment momentum.
We maintain our above-consensus growth forecast for 2014 of 8.2% while acknowledging the risks. We expect China to benefit from improved global growth this year.
Domestically, tighter monetary policy should dampen economic growth. If well managed, the impact should be moderate.
However, risks remain, including with implementation. The impact of structural reforms on growth in 2014 should on balance be broadly neutral.
Faster world trade growth should support China's growth via stronger exports and corporate investment.
Barring a worsening growth outlook, we expect them to continue doing that. But we think they are not interested in a drastic tightening.
Nonetheless, the monetary firming up implies risks for growth, including with implementation. Indeed, the slowdown in overall FAI growth towards the end of 2013 calls for scrutiny of the data in the months ahead.
In particular, financial sector opening and development, some opening of the capital account and removing barriers for private capital should be good for growth.
Likely measures that are negative for growth include charging higher SOE dividends and channelling the revenues to the Ministry of Finance, property taxation, higher prices and/or taxes for raw resources and a change in the weights on performance evaluation of senior local government officials.
However, we expect the net impact on growth to be neutral or slightly positive. We see two main sources of risks to our growth outlook for 2014.
Weaker global demand would mean lower export growth and corporate investment. Domestically, the impact of a tighter monetary stance on growth could be larger than expected.
Also, amidst changes in monetary policy conduct, hiccups and unexpected outcomes are possible.
A modest negative surprise would not affect our policy outlook much since our current growth forecast exceeds the government's bottom line of 7-7.5% quite a bit.
A larger negative surprise would likely lead the government to compromise on the firmer policy stance.
About the Author
This article is excerpted from “Alert China,” a report by Royal Bank of Scotland and affiliated companies that was published on 20 January 2014. It has been re-edited for conciseness and clarity. ©Copyright 2013 The Royal Bank of Scotland plc and affiliated companies (RBS). All rights reserved.
Photo credit: Shutterstock
Read more on
economic outlook China