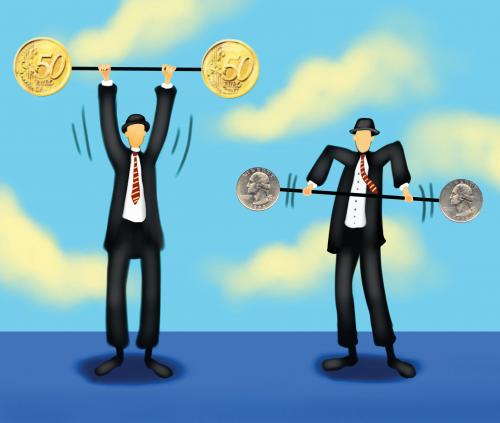 Pity Japan’s exporters and other companies that bill in U.S. dollars but pay salaries and other expenses in the local currency. The yen has just hit a 14-year high of 85 to the dollar. That’s an appreciation of around 10% over the past year, meaning that dollar earnings in yen terms have now been slashed by a tenth in value.

It’s a story that’s becoming more and more common across Asia. The U.S. dollar is also weakening against the Singapore dollar, the Malaysian ringgit, the Thai baht, the Indonesian rupiah – any currency you can think of save the Hong Kong dollar, which is formally pegged to the greenback. Even the Chinese renminbi is appreciating, albeit not as fast as other currencies because the government allows it to fluctuate only within a narrow band.
In light of the falling US dollar, using alternative currencies in settling trade has become increasingly appealing. The People’s Bank of China has signed bilateral currency swap agreements with six other central banks in Hong Kong, South Korea, Indonesia, Malaysia, Argentina and Belarus. The move can potentially inject RMB650 billion in renminbi liquidity into the financial systems of those markets. In July, China started an experiment allowing companies in certain Chinese cities to bill companies in ASEAN, Hong Kong and Macau in renminbi.
But these are baby steps. Even if the RMB becomes an international currency of trade like the U.S. dollar and the euro, it will not solve the problem facing many companies: the volatility of foreign exchange rates, something that looks like it’s going to be a fact of business life in the post-crisis world.
It’s the dollar that’s falling today as the U.S. struggles with its frightening deficits, but it can very well be the euro’s turn tomorrow and the renminbi’s the day after, if prognostications about asset bubbles building up there come to pass. What is the CFO to do?
Making a checklist
The goal is to minimize foreign currency risk today and in future, which means putting a long-term currency management system in place. FX hedging, while expensive, is certainly one of the options, along with non-deliverable forward (NDF) contracts, for restricted currencies like the renminbi, and natural hedging, where the currencies of revenue are matched as closely as possible with the currencies of expenses.
To figure out which option or combination of options works best for your business, every company needs to evaluate what risks need to be protected, and the company’s actual level of exposure.
Transaction exposure is amongst those considerations. Multinationals also need to keep in mind their assets and liabilities, which include accounts receivable and accounts payable that are denominated in foreign currencies. With purchase orders, the order’s value may change if the exchange rate changes before the company receives payment.
Another consideration is translation risk, where a company with a foreign subsidiary would have to translate that subsidiary’s balance sheet and income statement into the company’s home currency come financial reporting time, an exercise that can make P&Ls and balance sheets very volatile affairs, particularly with quarterly reporting. Lastly, planning against competitors may mean that your competitor’s decision to hedge or not may enable them to offer their product more cheaply.