Currency Planning: Will the Renminbi Be Freed Soon? 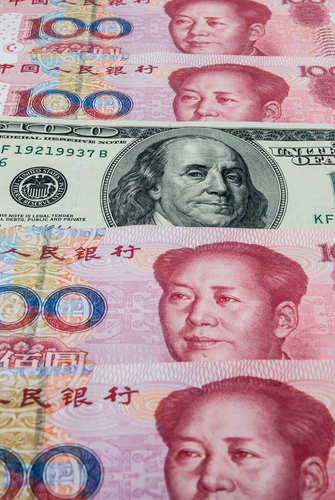 Against the US dollar, the Chinese yuan (CNY) appreciated from 6.23 in early February to 6.16 in early May, up 3.5% from its recent trough in July 2012. This followed an earlier strengthening episode in 2011.
In trade-weighted real terms, the recent appreciation was even stronger. Because of other currency movements, notably the depreciation of the Japanese yen, the nominal effective exchange rate (NEER) appreciated by about 5% from July 2012 to early May.
And with China’s inflation having exceeded that in most of its major trading partners, the real effective exchange rate (REER) rose about 7% in this period.
Stronger Yuan
When we talk about movements of the CNY, it is worth remembering that the Chinese currency is completely in the hands of policymakers. On any given day, it can in principle move within a +/-1% band around a daily reference rate fixed by the People’s Bank of China (PBoC), the central bank, before the market opens.
However, the PBoC traditionally tends to intervene a lot on the FX market to prevent the spot rate from making moves it does not like.
Nonetheless, the CNY has increasingly moved in line with macroeconomic fundamentals. The NEER has appreciated almost 40% since early 2005. Combined with some domestic rebalancing of the pattern of growth and depressed global demand, this has reduced China’s current account surplus from more than 10% of GDP in 2007 to 2.4% in 2012.
In our view, and that of senior policy makers including Governor Zhou Xiaochuan and Deputy Governor Yi Gang, the recent appreciation has largely eliminated the currency’s traditional undervaluation. The CNY is now broadly fairly valued from a macroeconomic perspective (see chart below).
China’s Currency Fairly Valued

More Upward Pressure
However, the CNY being at fair value does not mean there will no longer be pressure on the FX market. A “normal” current account surplus of 2.5% of GDP (our forecast for 2013) still implies US$200 billion. Also, this fair value is a long-term benchmark. In the short and medium term, capital flows matter.
Also, the fair value is a moving target. With productivity growth in China’s manufacturing industry more rapid than abroad, the REER needs to appreciate over time to prevent the current-account surplus from getting too large.
The appreciation in 2013 is in line with pressures on the FX market. On a net basis, financial capital flows became significantly positive again in early 2013, after having been negative in much of 2012. In addition, China’s structural surplus on the “basic balance” — the sum of the current account surplus and net FDI — continues to generate substantial inflows.
This is the case even though the underlying current account balance in Q1 2013 was less than the reported number due to the dressing up of capital inflows as exports by firms that has distorted the export data recently. This has triggered measures by the State Administration of Foreign Exchange to more closely monitor trade settlement transactions.
Currency Flexibility and Volatility
The main response of the policymakers to the renewed FX pressure, especially in the beginning of 2013, was to resume large-scale intervention by buying up FX. In the first quarter this year, China accumulated US$157 billion in official reserves on a flow basis (before the adjustment for valuation changes).
Nonetheless, it seems that more recently the PBoC wanted (and received the mandate) to absorb more of the pressure by letting the exchange rate strengthen. This is potentially in line with a planned movement toward a more flexible exchange rate regime.
Financial and monetary reform is one of several key outstanding areas of structural reform in China. In some of these areas, it seems to be difficult to make progress, with political economy factors holding up reforms on leveling the playing field between state-owned enterprises and other companies, recalibrating the role of the state in the economy, and the largely fiscal reforms needed to make urbanization better balanced.
Nonetheless, there currently seems to be a fairly broad mandate for financial and monetary reform, including interest rate liberalization, a more market-based and flexible exchange rate, and a controlled opening of the capital account.
Since 2012, the PBoC has made progress toward a larger role for the interest rate in monetary policy, in part by relying more on open market operations than on changes in reserve requirements to manage liquidity. As a result, the interbank market has deepened.
With interest rates now more stable, it is possible for them to play this more important role. Also, several steps have been taken on opening up the capital account in a controlled fashion, although China has so far been rightly cautious about this, since a premature opening up to financial flows can create havoc.
The PBoC would also like to see more volatility in the CNY – that is, more market-based movement up and down – because that would give China more monetary independence. Policymakers rightly stress that exchange rate reform is about the flexibility of the regime, rather than the level of the CNY. However, there can only be real flexibility when intervention is scaled back.
If the PBoC wants to introduce more flexibility in the face of the kind of net balance-of-payment inflow pressure as is witnessed currently, it needs to first guide the CNY to a level from which risks are truly two-way, with the currency as likely to depreciate as to appreciate. The recent appreciation has thus led to speculation that the central bank is gearing up for a more flexible exchange rate regime.
With the CNY already at the strong end of the band, the recent appreciation has also required strengthening the “fixing rate”, the centre of the +/- 1% band. Reflecting the current appreciation pressures, though, the spot rate remains glued to the strong end of the band (see chart below).
Up Against the Ceiling

Many observers expect the move toward more flexibility to take the form of a widening of the band. Comments by Yi Gang in mid-April that the band is probably going to be widened “in the near future” have increased speculation about an imminent move. This is so even though so far the PBoC has not let the spot rate use much of the room in the existing band.
But Don’t Bet on It
In 2012, when net pressures on the FX market were modest, it was relatively easy for the PBoC to let market pressures play a larger role in determining the exchange rate. In the second quarter of that year, when the balance of payment was in a mild deficit and there was modest depreciating pressure, we saw some depreciation of the CNY/USD. In second half, amid modest appreciating pressures, we saw some appreciation.
However, as we expected, more substantial appreciating pressures from larger net balance of payment inflows have re-emerged and are complicating the movement to a more flexible exchange rate regime.
In these circumstances, the kind of appreciation to bring the CNY to the point where risks are truly two-way may be sizeable – probably large enough to inflict serious damage to the real economy.
Traditionally such real-economy considerations have been a reason for delay on financial and monetary reform. Has the mind-set in Beijing changed? While we cannot fully rule it out, we doubt the policy stance on such a central element of the economic policy stance has changed so abruptly.
Broader Reforms Preferable
As part of China’s traditional industry and investment heavy growth model, its policy-setting is still biased towards industrial production, capital and company income, investment, and saving. A major structural current-account surplus has been one of the resulting imbalances, even though this surplus has been depressed in recent years by currency appreciation, some domestic rebalancing and weak global demand.
While progress on several key domestic reforms faces headwinds, financial and monetary reforms seem to face less resistance. It is tempting to be enthusiastic about the apparent current focus on financial and monetary reform, since China definitely needs them.
However, in our view it could be risky and painful economically to aggressively push ahead on financial and monetary reform in the absence of progress on the other economic reforms.
In our view, it would economically be better and less risky to frontload the major domestic reforms, tackling the elements in the policy setting that affect the pattern of growth. More domestic reform and rebalancing means stronger domestic demand and thus less need for appreciation to contain the current account surplus.
There is a risk that with rapid progress on financial and monetary reform but little progress with reforming the domestic policy setting, too much of the adjustment pressures fall onto the exchange rate, requiring the kind of appreciation that would hurt growth.
In our view, the Japanese experience is a useful benchmark. From the mid-1980s onwards, Japan was under pressure to contain its current account surplus just like China is now. Japan had limited success in its attempts to reform and rebalance towards more vigorous domestic demand. As a result, Japan needed a lot of REER appreciation to contain the current account surplus.
For the sake of the real economy, it would be better to kick-start the domestic reforms to rebalance the pattern of growth, rather than trying to bypass them by forcing through financial and monetary reform in the absence of broader reforms.
About the Author

This article is excerpted from “Top View China," a report by Royal Bank of Scotland and affiliated companies that was published on 6 May  2013. It has been re-edited for conciseness and clarity.