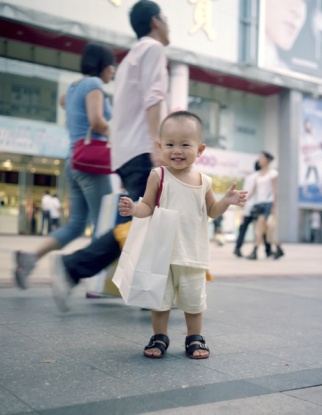 Introduction
China has for some time been immersed in a model that is heavily reliant on investment rather than on consumption. Investment’s share of GDP reached 35% in 2000 and has increased to 45% in 2011, while household consumption has declined from 47% of GDP to 35% of GDP in the same period.
However, this growth model has proven vulnerable as shown by the risks of overheating in the housing market and industrial overcapacity which surfaced after the global financial crisis. The Chinese authorities have made it a priority to enforce domestic demand through consumption-driven growth.
We expect consumption to catch up with investment in around ten years’ time (see chart below). Indeed, this is a multi-year process which relies on a number of structural reforms to improve household income and social safety nets, while maintaining China’s competitiveness, including strengthening financial intermediation and facilitating rural-urban migration.
Consumption and investment, % of GDP

Household consumption
Several Asian countries have successfully made the transition from investment-led to consumption-led growth, including Taiwan, whose consumption now amounts to more than 50% of GDP. China remains one of the countries in Asia with the lowest consumption/GDP ratio, at 35% of GDP.
One of the differences between China and these other countries is its high savings rate, which is a result of the still limited coverage of safety nets, as well as inadequate access to financial services.
The most recent published data from China’s central bank shows that the country’s household financial assets amounted to 122% of GDP in 2010. The largest share is held in deposits and cash (around 75%). As a reference, in the US this share is around 16%. The main difference is accounted for by pension holdings, which are still low in China so that households are forced to save for precautionary reasons.
On top of this, households receive artificially low returns for their deposits. Some estimates even suggest that China’s deposit rate regulation (deposit rates are currently around 2.5%) probably cost household income the equivalent of 4-5% of GDP and 7% of their disposable income (McKinsey 2012 and Lardy 2008).
This is probably one of the reasons why non-bank investment products such as wealth funds have become so popular lately. These wealth funds, which repackage financial products, including bonds, money market funds, equities and trust products, offer a higher yield to retail investors, while they are usually also short-term. The returns from these deposits could increase disposable income, but given their limited regulation and rapid growth, these products are not without risk.
Meanwhile, consumer loans are a small share of total loans in China at around 10%. They stand at half of that in the US. Consumer lending now amounts to 4.5% of GDP and almost 8% of household disposable income. Lending outside the banking system for consumption is also not significant.
All this suggests that the transition to a more sustainable growth model will be contingent on a financial system that is more balanced. It will take several years to fully implement a suitable welfare system, while financial liberalization will also be gradual.
In the meantime, consumers will be seeking ways to access financial services to increase private consumption, which may put some pressure on the pace at which these reforms take place.
Improving household income
China’s policies to improve consumption also involve urban expansion and improving the income of the low and middle class. The 12th five-year plan in fact signals these as priorities. The Income Redistribution Plan released only a few days ago also considers sweeping reforms, although the details are still vague.
One goal is to double household income from the 2010 level by 2020. The income redistribution plan includes 35 goals ranging from minimum wage guidelines per sector as well as income measures targeting rural households.
We think there is considerable potential for migrant workers moving into cities to increase their consumption. There are, however, still some barriers hindering this potential, including household registration “hukou”, which limits migrants’ access to social benefits such as health care and education.
Once the announcements from the authorities materialise to make “hukou” requirements more flexible, the picture could change in favour of consumption. However, this shift will be a gradual one. This is because it relies on a number of developments, including urbanization and access to education.
Official data suggests that around 10-13 million residents will move to urban areas each year. Approximately 52% of the migrant population has no form of urban social insurance, which suggests that precautionary savings – as well as the potential for consumption - is high for this group.
Another driver for consumption is the pace of growth of household income. In rural areas, wages have been accelerating faster than urban wages. Moreover, in urban areas the number of middle income households has been growing steadily.
Depending on the definition of middle income, estimates of this segment vary. China’s Academy of Social Sciences suggests that around 37% of the urban population can be defined as middle income and around 60% as low income. If the latter shrinks to about half, this will have a large impact on demand for food, housing, household appliances and luxury goods.
Rural and urban wages, % year-on-year

Consumption and investment
The balance of consumption and investment has been improving slightly lately. Despite the slowdown in 2012, China achieved fairly robust retail sales growth, averaging 14.3% year-on-year. Average retail sales growth rose to 18.4% in 2010 and to 17.3% in 2011.
Retail sales are a proxy for consumption, with the caveat that retail sales include government purchases and so overstate private consumer activity, while they omit the sales of commercial vehicles. These are considered an investment good rather than a consumption good, which is the case in most countries.
The fact that, during the recent slowdown, retail sales growth held up relatively well is probably the result of a low inflation environment and measures taken by the authorities to support consumption. For example, subsidies for energy-saving home appliances granted at the beginning of the downturn made a small but positive contribution to retail growth.
On top of that, the rapid expansion of shopping centres in second-tier cities and the growing popularity of e-commerce also held consumption steady.
Uncertainty was high though in the luxury goods segment, where demand is sensitive to the economic cycle. This was a concern for sales of global brands, since a quarter of luxury goods are now consumed by the Chinese. Despite this, the emerging middle class even increased their spending in high segment jewellery.
Meanwhile, fixed investment growth has also been slowing down. In 2010, fixed investment growth averaged 25.3% and in 2012 it stood at 20.6%. In contrast to the 2007-2008 crisis, this time the authorities were more cautious about stimulating the economy through fixed investment.
Structural reforms
The structural reforms to support the transformation process are part of all major plans, but the details of how they will be implemented have not been fully addressed. The new urbanisation process is work in progress.
For instance, the “hukou” system has received little support from local governments, since they are responsible for the funding of full-scale benefits for the migrant worker, including infrastructure services, education and medical care.
As for the financial system some suggest that it may even need to be recapitalized before carrying out a broad regulatory reform that directs resources more efficiently, while favouring depositors.
Moreover, the government has committed to expand expenditures on social security, education, health care and employment promotion by 2ppts during the period of the 12th five year plan (2011-2015). China’s authorities have already increased social spending by 6 percentage points in the past four years.
Finally, important progress has been made in expanding pension coverage. According to the Ministry of Human Resources and Social Security, less than 30% of adults were covered by the government’s pension system in 2009. By the end of 2011, around 55% of adults were enrolled in different schemes. The pension financing gap could be a problem in the long run.
The outlook for consumption
This all suggests that China is at the start of a transition to a more sustainable growth model, since it requires a deep transformation of the economy. The model requires new cities to flourish and household income to rise, creating a long term potential for consumption.
We believe that this process, during which consumption will overtake investment, will take around ten years, but in the meantime there are gains to be made from the rise of a new market of consumers with changing consumption patterns.
Even the most conservative estimates of what consumption will look like in the coming years suggests that with the growth of the middle class and prospects for urbanization, consumption will treble in the years leading up to 2020 (see table below).
Breakdown of consumption in 2020

About the Author
ABN AMRO serves retail, private and commercial banking customers in the Netherlands and across the globe. This article is excerpted from “China: The Rise of Consumption” published on 18 February 2013 and has been re-edited for clarity and conciseness. It is solely intended to provide financial and general information on economics and does not constitute an offer of securities to the public nor a solicitation to make such an offer.
Read more on
China