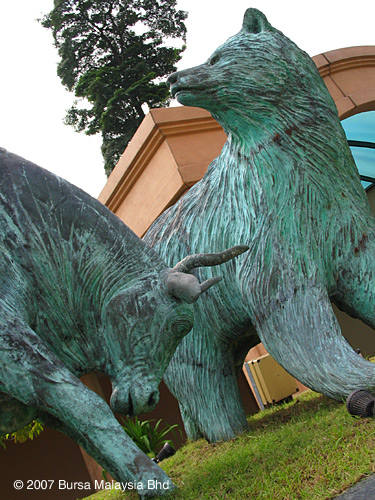 I have just returned from a working visit to Kuala Lumpur, the capital of Malaysia. I spoke to Dato’ Yusli Mohamed Yusoff, CEO of Bursa Malaysia, the country’s stock exchange, and was impressed by the company’s big plans.

First, the Bursa is teaming up with the CME Group, the U.S. operator of the world’s largest futures and options market, to bring CME products to Asia via Malaysia, and also develop Asia-based products, such as derivatives based on palm oil, a key Malaysian export.
It’s a significant coup for Bursa Malaysia. CME was formed by the merger in 2007 of the Chicago Mercantile Exchange, Chicago Board of Trade and New York Mercantile Exchange. As such, it offers the widest range of commodity derivatives anywhere in the world, including futures and options on grains, livestock, oilseeds, dairy, lumber and other products.
Many of the financial instruments are traded nearly around the clock on the CME Globex electronic platform, which means treasury centres in Asia will be able to hedge exposures in real time during the Asian working day. CME currently has some 1 million Globex terminals. Bursa Malaysia’s current 600 terminals will eventually migrate to the CME platform.
CME will be buying 25% of Bursa Malaysia’s derivatives subsidiary. Through that investment, it will help develop derivatives based not only on palm oil but also on other Asian commodities like rubber, coconut, pepper, rice, tin and other regional products.
Because the instruments are based on commodities they are familiar with or even produce themselves, Asian firms will be able to hedge exposures with more confidence. They will also have the assurance that they are dealing with counter-parties that have a long enough track record to trade on – and be governed by the rules and regulations of – CME and Bursa Malaysia.
Bursa Malaysia is also working on another promising line of products that should set it apart from Hong Kong and Singapore, the region’s acknowledged financial centres. These are financial products – equities and bonds, and possibly derivatives – that comply with Islamic law, or Shari’ah.
About two-thirds of the 1,000 or so stocks on the Bursa’s two equities boards – the Main Market and ACE Market for start-ups and smaller enterprises – are already Shari’ah-compliant. That means they can access the estimated US$4-trillion in investable funds in Islamic countries, including oil money in the Middle East.
Being Shari’ah-compliant does not mean the company should be owned or controlled by Muslims. Hong Leong Industries and Nestle, for example, are both certified as compliant with Islamic law. Non-Muslim companies that meet Islamic standards, such as not being engaged in games of chance or alcohol, can list on the Bursa and be declared Shari’ah-compliant – and thus gain access not only to Malaysia’s conventional funds but to Islamic wealth inside and outside the country as well.
All these initiatives are in the early stages. Hong Kong and Singapore need not quake in their boots yet. Not that Malaysia is out to supplant either of them. The Bursa’s approach appears to be one of cooperation rather than competition. Indeed, with their countries being part of ASEAN, the exchanges in Malaysia and Singapore will become more interconnected as the ten-nation grouping moves toward a European-style economic union.
If Bursa Malaysia’s plans bear fruit, one of the winners will be Asia’s companies and their CFOs and treasurers. They will be able to gain access not only to conventional funds but to Islamic riches as well, and do so through a variety of financial products from IPOs to secondary listings to bonds to commodities derivatives.
About the Author
Cesar Bacani is senior consulting editor at CFO Innovation