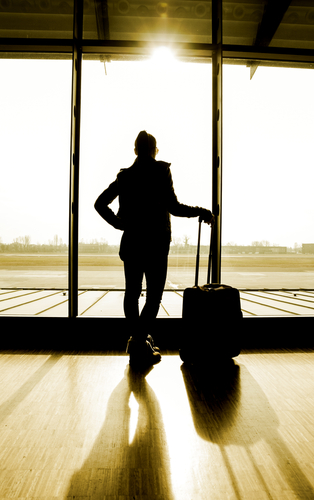 Well, OK. 'Avoid' may be too strong a word. If you’re doing business in China, you really cannot avoid flying mainland carriers and using Chinese terminals and runways – and these are the airlines and airports that perform the worst in terms of on-time departures and arrivals, and cancelled flights.
A word to the wise road warrior: When traveling in China, consider booking on Lucky Air, Beijing Capital Airlines and China Southern, which arrive as scheduled 62% to 65% of the time.
Think twice about flying with Xiamen Airlines, which arrives more than 45 minutes late 36% of the time, and China United Airlines (more than 45 minutes late 49% of the time).
And if you’re flying out of Beijing, be ready for long delays. Only 18% of flights from Beijing Capital International Airport depart on time – compared with 96% from Japan’s Osaka International Airport at Itami.
These are some of the more helpful snippets from the latest Airline and Airport On-Time Performance Report by FlightStats, which provides day-of-travel data services and applications. The summary of airline arrivals and departures from 1 to 30 June 2013 covers at least 80% of all airline arrivals and airport departures.
There’s an important caveat. “The information contained in FlightStats reports has been compiled from various sources, and the Owners disclaim all responsibility for checking and verifying that the underlying data is 100% accurate,” FlightStats warns.
But we at CFO Innovation think the information is helpful as indicative data for the purpose of planning business travel. If CFOs and other executives know what the on-time odds are about the airlines and airports they will be using, they can better plan the scheduling of their meetings and other activities.
Flying in China
Such planning is particularly needed in China, where passengers on a United Airlines flight bound for the US was stranded for three days in Shanghai last year. The chronic delays have caused some frustrated flyers to erupt in rage, causing the China Civil Aviation Administration to issue a circular that directed airport authorities to punish those who smash counters and rush to the runways.
Various factors have been blamed for the delays at China’s airports, including military control of the skies, state ownership of airports and poor air traffic control. The suspicion is that military exercises cause the delays, but this is never confirmed and no explanation is ever made (because military movements are state secrets), further enraging passengers.
For those traveling to and from China, it’s good to know which airlines do better relative to others in terms of on-time arrivals (see table below).
Click image to enlarge
Waiting for Godot  in China

Sources: Airline Arrivals and Airport Departures, StatsFlight and CFO Innovation
A lot of the less-than-optimum airline performance is due to China’s airports. They are actually state-of-the-art, particularly the spacious and iconic terminals in Beijing (designed by award-winning global architects Foster + Partners) and Pudong in Shanghai (Richard Rogers Partnership).
But business travelers will need to carefully plan their meetings around almost certain flight delays, especially when flying from Beijing, Hongqiao in Shanghai, Hangzhou, Shenzhen and Guangzhou (see table below).
Click image to enlarge
China’s Maddening Airports

Sources: Airline Arrivals and Airport Departures, StatsFlight and CFO Innovation
Hong Kong Vs. Singapore
Airport experience is better elsewhere in Asia, although the China situation inevitably has an effect on on-time performance. This is particularly true of Chek Lap Kok Airport in Hong Kong, where 10% to 20% of all flights go to China (and may also explain why regional carrier Dragonair is only 58% on-time, compared with 70% at mother company Cathay Pacific).
Flights from Hong Kong depart as schedule 64% of the time, a bit better than Chicago in the US (63%) and Rome (59%), but not as good as JFK in New York (66%) and Heathrow in London (71%).
Hong Kong is way behind Changi in Singapore, where 78% of flights leave on schedule. The situation had been the reverse in January, when Hong Kong’s on-time departure performance was 77% and Singapore was only 64% on time. A Hong Kong airport spokesman told the Wall Street Journal that “inclement weather or the operation of airlines” could account for the rise in delays, along with bottlenecks at China’s airports.
Tokyo’s Narita Airport (86%), Gimpo in Seoul (86%) and Delhi Airport (84%) are among the better performers in Asia in June, slightly ahead of Amsterdam, Seattle, Minneapolis and Toronto.
Click image to enlarge
Better Performing Airports

Sources: Airline Arrivals and Airport Departures, StatsFlight and CFO Innovation
India, Korea, Japan
The relatively on-time performance of airports in Hong Kong and Singapore likely contributed to the solid performance of their national flag carriers. But note that Cathay Pacific’s 70% on-time arrival record (80% in January) is behind Singapore Airlines’ 81% (86% in January).
India’s IndiGo has a higher on-time arrival record, at 88%, than Singapore Airlines, although its international network is not as extensive – it flies only to Dubai, Bangkok, Singapore, Muscat and Kathmandu, as well as domestically. Other solid flyers in June include Korean Air Lines, Japan’s Skymark, Bangkok Airways, Korea’s Asiana, Thai Airways and Air Canada.
Click image to enlarge
Solid Flyers

Sources: Airline Arrivals and Airport Departures, StatsFlight and CFO Innovation
Airports in Japan dominate the most on-time league, testament to the famed Japanese efficiency, service and technology. Jeju International Airport in Korea is the only non-Japanese airport that cracked StatsFlight’s 90% or better on-time departure list.
Click image to enlarge
World’s Most On-Time Airports

Sources: Airline Arrivals and Airport Departures, StatsFlight and CFO Innovation
Planning ahead
What is this all in aid of? Better planning and scheduling, first and foremost. If you’re in Beijing and have an important meeting in Shanghai flying on Shanghai Airlines, you might want to leave the capital a day early. Or buy back-up ticket on another airlines or arrange for a Telepresence conference.
Time, as they say, is money. In today’s globalized and volatile business environment, the executive who can anticipate flight delays and cancellations will be that much closer to saving and making money for his company and himself.
About the Author