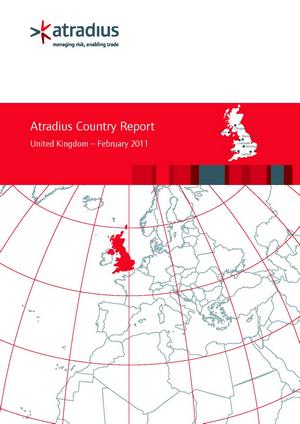 The UK’s public debt has risen sharply since 2009, as a result of the credit crisis and heavy governmental spending to stimulate the economy.

Corporate insolvencies continued to decrease in the third quarter of 2010, and the likelihood is that business failures will have dropped 15 % year-on-year in 2010 and, we estimate, will decrease a further 5 % in 2011.

According to preliminary estimates, in the last quarter of 2010, real GDP fell 0.5 % on the previous quarter, as construction and services output decreased and adverse weather conditions hampered the economy.

Inflation rose to 3.7 % in December 2010, driven by higher food and fuel prices. With the increase in VAT from January 2011 (from 17.5 % to 20 %), and the continued rise in the cost of fuel, consumer prices are expected to rise further in the coming months.