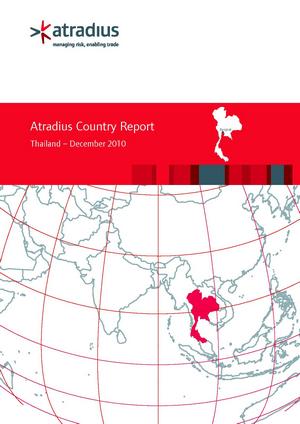 The economy rebounded strongly in 2010, with GDP growth of 12% year-on-year in Q1 and 9.1% in Q2, due mainly to booming exports (especially cars and electronics), but also a surge in private investment and consumption. Tourism and domestic demand weren’t as badly affected by the political unrest (the riots in Bangkok in April/May) as had previously been expected.

However, overseas sales have begun to slow down, as global demand cools down and the appreciation of the baht against the US$ undermines the competitiveness of Thai exports. In Q3 of 2010 growth already slowed to 6.7% year-on-year (-0.2% on the previous quarter) as exports and agriculture output declined. After this year’s strong economic performance (7% growth), GDP growth is forecast to slow to 4% in 2011, since the recovery of the US and Japan remains fragile and China’s growth will cool down. Domestic demand is expected to be a main driver of growth.

The baht will remain under appreciation pressure, as the recent US Federal Reserve decision to start another round of quantitative easing will probably decrease the yields on American assets, driving more short-term investment capital to emerging markets like Thailand. A further baht appreciation would hurt exports. Therefore further capital control measures taken by Thai authorities to tighten currency volatility cannot be ruled.