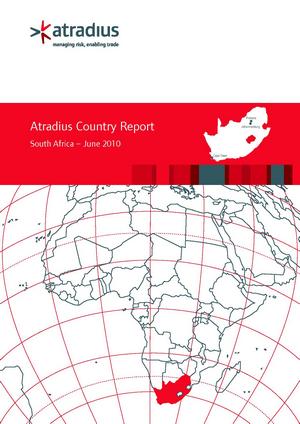 In 2009, South Africa fell into recession for the first time for 17 years, as GDP declined by 1.8% and foreign trade deteriorated by 18%. However, the country has recovered quickly, with industrial production and investments picking up again, especially in the automotive, petrochemicals and mining sectors. Private consumption has also rebounded, supported by the FIFA World Cup, and is expected to increase by 5% year-on-year in 2010.

Prudent fiscal and monetary policies helped to cushion South Africa against the repercussions of the global credit crisis. The recession galvanised the government into launching stimulus programmes that will lead to budget deficits of 6% of GDP last year and 7% of GDP in 2010. The government is investing in education, social welfare and service delivery, and has announced its plans to spend around Euro 80 billion on public infrastructure.

The expected GDP growth of 2.8% in 2010 will increase to 3.7% in 2011. However, the 2009 recession has undermined bank assets and has resulted in large budget deficits, and, to ensure a sustainable reduction in its very high unemployment rate, the country needs to achieve annual GDP growth of 4.5% to 5%.