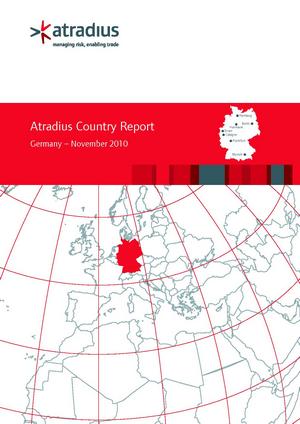 Real GDP growth increased 2.2% on the previous quarter in Q2 of 2010 – the highest quarter-on-quarter growth since 1990 - thanks mainly to thriving exports and capital formation. Between January and August 2010 exports rose by 19.2% year-on-year, with the trade surplus amounting to €81.6 billion. Exports to Brazil (+61.3%) and China (+55.5%) showed particularly high growth rates in the first half of the year. The export boom has benefited those sectors that had suffered a massive slump during the crisis, such as automotive and metals.

Private consumption grew 0.6% quarter-on-quarter in Q2, after a weak performance in the previous nine months (see chart below), contributing positively to GDP growth. Consumer confidence has bounced back to pre-crisis levels (see chart below), as consumers express optimistic expectations of the future economic situation. Employment is rising - with unemployment subsequently down to 7% in October: the lowest level for 18 years.

Industrial production has recorded two-digit year-on-year monthly increases since March 2010, while turnover in manufacturing rose 10.1% year-on-year between January and August 2010. In Q2 of 2010 capital formation in machinery and equipment and in construction increased substantially on the previous quarter (up 4.4% and 5.2% respectively).

In October, the International Monetary Fund revised its forecast for German GDP growth upwards: to 3.3% in 2010 and 2.0% next year. Global growth is expected to cool down somewhat in the coming months, leading to lower demand for German goods. However, private consumption will probably continue to rebound. The pace of growth in insolvencies has been slowing since the end of 2009. We estimate that corporate insolvencies will decrease 5% year-on-year in 2011, after three years of increases.