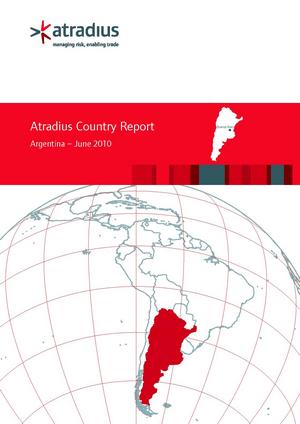 This year has seen the start of an economic recovery, thanks to record grain harvests and expansive economic policies (e.g. a child support system for poor families and cheap mortgages for first-time buyers), stimulating domestic demand, albeit artificially. GDP growth of 4.2% is forecast for 2010, although this rebound will be at the cost of continuing high inflation: the official forecast is 8.4%, whereas the actual figure will exceed 20%.

With mounting fiscal deficits, there is a high risk that the government may turn to other public sector agencies to cover its finance gap. In January 2010, President Fernández de Kirchner ordered the central bank to transfer US $ 6.6 billion of their foreign reserves to a fund to service the public debt.

Argentina’s sizeable international reserves are a cushion against short term rollover risks in 2010 and 2011, but capital flight remains a threat. Despite the debt swap agreement in June 2010 and the prospect of a final debt settlement, the credit default swap (CDS) spreads on Argentina are still the highest in South America, and continue to bar its access to the global financial markets, including the issuing of bonds by larger Argentine corporates. Argentina dropped plans to issue US $ 1 billion new debt in tandem with the recent swap because it did not want to accept the market conditions (double-digit interest rates).