Assessing the Renminbi as a Global Currency 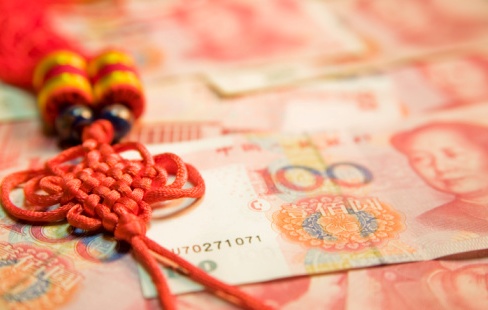 The “international” label stems from the use by residents or firms of a currency issued in other countries. In addition, the functions differ between the private sector and the official sector due to the different motivations for using or holding a currency. We discuss each of the functions below.
Medium of Exchange
This is the most basic function of an international currency. It satisfies two types of demands – one is for “pure” currency exchange in the forex market, while the other is for the exchange of goods, services and financial products, with cross-border trade settlement as a good example. The former is usually referred to as the “vehicle currency” function, while the latter is known as the “payment currency” function.
Vehicle currency. Trading volumes in the foreign exchange market form a good indicator to quantify the “vehicle currency” role. The Bank of International Settlement (BIS) conducts a survey on foreign exchange activity every three years, providing information on the size and structure of the global foreign exchange market. The most recent update used 2010 data.
The FX trading volume can be measured by the turnover of over-the-counter foreign exchange, including spot, forwards, options and swaps, etc. In the global currency system, USD remains the dominant vehicle currency, representing 42.4% of the total trading volume (see chart below). EUR, JPY and GBP come next, with the share of each ranging 6-20%.
Currency distribution of FX turnover (2010)

The share of RMB was 0.4% in 2010, ranking 17th among all the reporting countries/regions. Though the share was small, it implied major progress from a share of nearly zero in the 2001 and 2004 BIS triennial surveys. The presence of the RMB in the foreign exchange markets should have increased since 2010, due to the promotion of RMB internationalization. We will closely watch the results of the new BIS survey, which will be released in November 2013.
Payment currency. Meanwhile, in terms of the payment currency function, the monthly payment currency data compiled by the Society for Worldwide Interbank Financial Telecommunications (SWIFT) can shed more light. Payment data includes transactions associated with international trade in goods and services, as well as international financial transactions.
In 2012, EUR ranked the top among the payment currencies, with a share of 41.7% (see chart below). EUR surpassed USD, partly because of the large intra-regional trade of Eurozone. The RMB ranked No.15 in 2012, with a share of 0.5%. According to SWIFT’s latest update on 22 May, the RMB’s ranking rose to 13 in April 2013.
Payment currencies as a % of the total (2012)

In the case of large countries, payments are still largely in currencies other than RMB. However, among the 160 countries that exchanged payments with China and Hong Kong in April, 47 countries had at least 10% of their payments value in RMB, underscoring the progress made with the encouragement of RMB trade settlement.
Store of Value
In the private sector, an international currency plays the role of store of value through financing and investment activities. A financing currency’s role can be measured by the amount of issuance of international bonds/notes (i.e., maturity of one year or more) and money market instruments (such as commercial paper) that are denominated in the currency.
The “international” aspect comes into play in one of two ways. One way is if a company issues a bond or a money market instrument denominated in a currency which is not the home currency of the investors. For example, a company (Chinese or foreign) issues RMB bonds outside of China. The other way is if a company issues a product denominated in the currency of a foreign country. For instance, a foreign company issues RMB bonds in China.
The structures of the international bond market and money market change over time. One of the most notable observations is that EUR, instead of USD, has the largest share in both markets at present. Moreover, more than 90% of the international bond market and money market is cornered by the EUR, USD, JPY, GBP, SWF and AUD.
While the RMB’s share is still small, its development in the two markets was fast in the past two years. Especially, the RMB’s share in denominating the money market instrument doubled in 2012 (see chart below).
Share of RMB in denominating international bond and money market instruments

In 2012, the RMB rose to the 8th and 10th place in denominating of international bonds and money market instruments, respectively, due to the increase of RMB’s liquidity in these markets. This means a similar status as the HKD in the global currency system. These developments were the result of the progress with RMB internationalization, especially the expansion of CNH bonds and the CDs market, and the liberalization of the capital market in China.
In the official sector, an international currency’s “store of value” lies in the function of reserve currency. In the international reserves system, the USD remains the dominant currency. However, its share in the reserve system has been declining over time, from 71% in the late 1990s to 62% in 2012. The composition of the international reserve system has become more diverse over the past several years. The share of non-G51 currencies was on an increasing trend, from 1.8% in 2007 to 6.1% in 2012.
This changing pattern was partly because several central banks are increasingly interested in including emerging market currencies, especially the RMB, into their portfolio, to diversify their reserve currencies. Most recently, in April, the Reserve Bank of Australia (RBA) announced it will transfer 5% of its foreign currency reserves into Chinese bonds, deepening ties with its Pacific neighbour and biggest trade partner.
Even before the RBA announced that it was to invest a portion of its reserves in RMB, a number of other central banks were thinking of doing so. A poll of 60 reserve managers responsible for assets worth almost US$7tn, conducted by RBS earlier this year, found 64% were considering investing in the RMB in the future. 14% had already done so.
Unit of Account
The role of pricing and quotation currency is difficult to quantify. However, it is evident that the USD remains by far the most important currency in this dimension. The RMB’s role is very small, especially compared to the role that China’s economy plays in many of the associated markets.
However, there is still some progress in this area. For example, the Shanghai Mercantile Exchange is planning to develop crude oil futures denominated in the RMB, while the Hong Kong Mercantile Exchange is also planning this for precious and base metals contracts.
China would like the RMB to be included in the IMF’s Special Drawing Right (SDR) basket. Currently, four currencies are in the SDR: the USD, EUR, JPY and GBP. The next revision of the SDR basket is scheduled for 2015, but it remains to be seen whether the RMB will be included.
Many experts argue that one of the basic criteria for gaining inclusion in the SDR market is full convertibility of the currency. However, the RMB is not yet convertible and we do not expect this to be achieved in the coming three years.
Conclusion
The global currency system is still dominated by the USD, EUR, JPY and GBP, which have a combined share of 90-95% in every financial market, but this is on a slightly decreasing trend. Despite recent turmoil in the Euro area, the importance of the EUR has increased. Its international use surpassed that of the USD in some markets, such as in international bond and money market instrument denomination.
But the global currency system is becoming more diverse with rising roles for emerging market currencies, such as the RMB, although their shares remain very low.
The international use of the RMB has increased rapidly in recent years. At the beginning of this century, the share of the RMB in international markets was close to zero. Its status in the global currency system has risen because of RMB internationalization, exchange rate and capital market reform, and liberalization of domestic financial markets. As a result, it now plays a role as vehicle currency, payment currency and financing currency.
The status of RMB in global currency system

However, due to limited liquidity in China’s FX markets, continued restrictions on its domestic financial markets, as well as on capital flows and the exchange rate, international use of the RMB remains far below that of the major currencies, such as the G5 currencies (USD, EUR, GBP, JPY and SWF), AUD and CAD.

International use of the RMB is also very low compared to the role of China in the global economy. If the government wants to further increase the importance of the RMB in the global currency system, more reforms are needed, such as liberalizing the foreign exchange rate market and eventually removing capital account restrictions.

This article is excerpted from “Top View: China,” a report by Royal Bank of Scotland and affiliated companies that was published on 31 May 2013. It has been re-edited for conciseness and clarity.