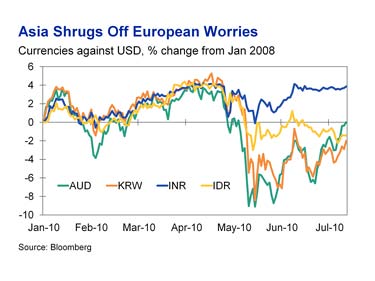 The mild moderation in Asia's robust recovery is in line with our expectations for slower, sustainable growth. Despite numerous downside risks, policymakers are discounting the likelihood of a double-dip recession, and the normalisation of monetary policy is well under way. Domestic demand is strengthening, but Asia remains dependent on exports at a time when global demand is still at risk of weakening.
The Chinese economy is slowing, in line with our forecast for a soft landing. Consumer and producer price inflation also cooled in June, which will comfort policymakers and may reduce the urgency for further tightening. Growth is expected to slow even more. Purchasing manager surveys in China indicate a weakening in new production orders, although firms remain optimistic on net. Residential property demand is slowing, and the removal of export subsidies and of the de facto peg of the yuan against the dollar is expected to cool the broader economy.

Data for South Korea and Taiwan tell a similar story, with industrial production growth peaking in the first quarter. Their recoveries had been expected to moderate as inventory restocking finished, fiscal stimulus spending was phased out, and firms met deferred demand. The big outlier in East Asia is Japan, where employment, income growth and household expenditure are weak and the recovery is ever-reliant on exports. Moreover, among East Asian economies, Japan's export recovery has been the weakest, partly because of the strong yen.

India continues to recover robustly. GDP growth accelerated to 8.6% y/y in the first quarter, led by exports and investment. A normal monsoon season is expected to boost agricultural output and ease shortages. Southeast Asia is also in good shape. Higher commodity prices have boosted exports in Malaysia and Indonesia. Exports have helped Thailand through its recent political instability, although the protests have taken their toll on production.
Australia's recovery remains on track. Nascent inflation pressures have prompted the RBA to raise interest rates six times since it began tightening in October. The labour market has tightened considerably, and capacity constraints are emerging in mining. Exports are driving New Zealand's recovery while lingering weakness in the property market constrains household spending.
Monetary tightening
European sovereign debt problems may have delayed Asia’s monetary tightening schedule but have not halted it. Inflation could slow in the coming months as financial market volatility lowers commodity prices, but shrinking output gaps will put pressure on prices over the medium term. Hence, monetary authorities remain committed to the gradual withdrawal of stimulus measures to head off inflation.

The monetary tightening cycle is not over, as the real cost of borrowing remains low in many Asian countries. Quick estimates of real interest rates—subtracting headline consumer price inflation from benchmark monetary policy rates—show them hovering below zero in China, Korea, Taiwan and Thailand.
Inflation is likely to trend lower in the latter half of 2010 because of a rising base from a year ago, weaker commodity prices, and slower global growth. But low real interest rates are one reason to expect a rise in inflation in 2011. In China, bank lending has fallen from its peak but remains historically high. The People's Bank of China's benchmark one-year lending and deposit rates were lowered to 5.31% and 2.25%, respectively, in December 2008, and despite the swift recovery since then, they have yet to rise. A more flexible exchange rate will not make an appreciable difference to inflation, given the expected gradual appreciation of the yuan.

Although the Reserve Bank of India has been one of the most aggressive in the region in raising interest rates, the swift rise in inflation means that real borrowing costs remain very low. The RBI has been arguably behind the curve in monetary tightening, although in its defense, two factors are complicating matters. The government liberalised fuel price controls in June, and while a welcome development for its finances, the move has raised inflation in the short term. The other factor is the recent poor monsoon season, which has raised agriculture prices. Better weather is expected to increase food production and lower prices in coming months.
Little fallout from Europe
Recent concern regarding spillover from Europe's sovereign debt problems is misplaced, at least for the time being. Asia as a whole, along with much of the developing world, shrugged off the effects of Europe's sovereign debt problems as the EU and IMF helped stabilise conditions there. Currencies have mostly recovered to their values at the beginning of the year, partly because exports remain robust.

Still, sovereign default in Europe is not out of the question, although it is not our base scenario. Such an event would likely hurt Asia in the usual manner—currencies and stock values would weaken because of risk aversion and downwardly revised global growth expectations, and foreign investment would also decline.
Given Asia's relatively healthy government balance sheets, the biggest impact of renewed global financial stress would be weaker exports. This weakness would occur through two channels: Financial market volatility could cause another sharp drop in exports if trade finance were to tighten again. Little has changed since late 2008 in the financing of exports though letters of credit, and heightened risk aversion would cause another sharp drop in the availability of trade credit and exports.
This phenomenon would be temporary, and exports would recover as financial markets settle. A longer-term issue would be weaker demand from Europe. All else equal, austerity measures in Europe would result in higher national savings (or lower dissaving) and higher trade surpluses (or lower trade deficits) and would require the reverse from the rest of the world. A sovereign debt crisis would result in a much harsher adjustment and, hence, likely result in a much sharper contraction in imports from Asia.
The need for domestic demand
Strong domestic conditions led Bank Negara Malaysia to increase its overnight policy rate even in the midst of the European debt concerns and the Bank of Korea waited until private sector labour demand improved before tightening policy. Recent labour strikes in China are a symptom of the gradual shift in national income towards households.
But although domestic demand in Asia is strengthening, the region remains dependent on exports. In Korea, for instance, second quarter GDP data show exports growth outpaced private consumption. Domestic demand has been kick-started by the recovery in the global economy, as increased production and exports across Asia have encouraged investment and improved labour market conditions. However, if exports stumble again, it is unclear whether domestic growth will take the lead.
To a certain extent, a shift to domestic demand has already happened because of government stimulus measures. But fiscal measures are temporary, and governments are already signalling a consolidation of budgets. Sustainable, domestically driven growth would require a faster pace of investment and household consumption. For these reasons, the key downside risk for Asia remains a weak global economy.
About the Author
Alaistair Chan is an associate economist in the Sydney office of Moody’s Economy.com.
Read more on
economic outlook