After Monetary Tightening, What Next for China? 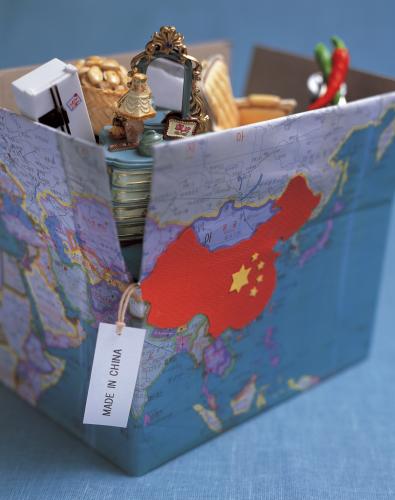 The year ahead will be crucial in strengthening China's economic recovery and "defeating" the global credit crisis, according to the governor of the People's Bank of China. The PBoC has pledged to maintain its "moderately loose" monetary stance in 2010 but also faces the task of unwinding the stimulus measures put in place before any destabilising asset bubbles or inflation occurs.

The People's Bank of China last week raised the yield on its three-month bill by 4 basis points to 1.3684%. Prior to this the yield had been unchanged since August 2009. Three-month bills are auctioned weekly by the PBoC as part of its sterilised intervention program to remove the liquidity generated from keeping the exchange rate stable. The 4 basis point increase is fairly trivial but is likely to be followed by further increases. The prior tightening began in July 2009 with a 6 basis point move and the yield ended 36 basis points higher a month later.
Reducing the amount of monetary easing is a gradual process, and there are a variety of tools that policymakers will use before turning to traditional levers such as interest rates or the exchange rate. An increase in the three-month bill yield is one first step. It allows the PBoC to auction off greater quantities of securities and drain more money out of the economy.
The next step would be increased reserve requirements for commercial banks. This reduces the amount of capital available for lending and lessens the impact of nonperforming loans on bank balance sheets. After that, bank deposit and lending rates could be raised. They tend to be raised in tandem, to preserve banks' profit margins. The final move would be allowing the exchange rate to appreciate, and this is likely to occur only once the outlook for exports has stabilised and inflation is clearly becoming a problem.
Bank Lending
The increase in three-month bill yields also serves as a signal to commercial banks to avoid excessive lending. Banks tend to lend heavily at the beginning of the year to ensure lending targets are met, and also because corporates seek to allocate funding for projects at the beginning of the year. Hence another surge in bank lending is likely in the early months of 2010. A tightening move signals to banks that funding conditions could become tougher in coming months.
New yuan loans in the year to November 2009 reached 9.2 trillion yuan (US$1.35 trillion), and could top 9.5 trillion yuan for the 2009 calendar year. Some policymakers have signalled a 7 trillion yuan target for new lending for 2010. But it is unclear if this would be a meaningful reduction in lending, as bank lending in 2008 was 4.9 trillion yuan.
Moreover, the actual stimulatory impact of bank lending in 2010 could be unchanged from 2009, despite the reduced headline amount. This is because some proportion of the lending throughout 2009 was put into asset markets or has not yet been spent, implying a smaller proportion was used for physical investment. The authorities are cracking down on lending used to fund speculative investment in assets, so a new round of lending could have a greater bang per buck in terms of fixed investment. And some of the projects that were proposed in 2009 and had funds already allocated are only just commencing, which will give fixed investment a boost in coming months.
One other potential monetary stimulus is speculative inflows. Given the Chinese economy's outperformance relative to the rest of the world and the possibility of higher interest rates and a stronger currency, speculative capital inflows have been picking up again. The government is attempting to tighten capital controls but it could face the same problems it faced in early 2008 of a surge in hot money. This would negate the PBoC's tightening moves by forcing it to print more money to keep the exchange rate stable.

Ultimately the reason for monetary tightening is to manage inflation. While consumer price inflation remains minimal—CPI grew a modest 0.6% y/y in November, the first year-on-year increase since January 2009—it is clearly heading upwards. Producer price inflation is rebounding quickly, due partly to increased commodity prices and also government mandated higher electricity and fuel costs. Chinese households are primed to expect higher inflation, which may explain why recent speculative activity to drive up the price of garlic was so effective (and speculators are now doing the same thing with pepper).

Along with the monetary tightening, the government will take steps to cool asset markets and inflationary pressures, which will buy the PBoC time to retain accommodative monetary policy settings. The property market will continue to receive government attention. One recent development was a rule to limit the credit available for the purchase of second properties. The government has also pledged to increase the supply of lower cost housing. To deal with consumer inflation, the government is likely to turn to similar administrative measures it took in early 2008 to deal with rising pork prices. These include government stockpiles of key products, efforts to dispel rumours, subsides for lower income households, and possible price controls on some products.

About the Author
Alaistair Chan is an associate economist in the Sydney office of Moody's Economy.com. Commentary produced by Moody's Economy.com is independent and does not reflect the opinions of Moody's Investors Service Inc., the credit ratings agency which is also a subsidiary of Moody's Corporation.
Read more on
foreign exchange economic outlook