Who Is the World’s Biggest Accounting Firm? 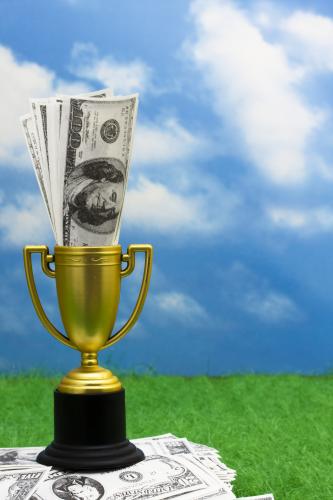 They are called the Big Four – in alphabetical order, Deloitte, Ernst & Young, KPMG and PwC. But in 2012 revenues, it looks more like the Big Two and the Less Big Two.
Both Deloitte and PwC reported revenues of more than US$31 billion each. Ernst & Young and KPMG were some steps behind with sales of US$24.4 billion and US$23 billion, respectively.
And the world’s largest accounting firm is . . .  PwC, for the second year running. As tracked in The 2012 Big Four Firm Performance Analysis by the Big4.com website, PwC had revenues of US$31.5 billion, up 7.8% from 2011 in US dollar terms.
The revenues of second-placer Deloitte, which occupied the top spot in 2010, were just a tad lower at US$31.3 billion, though that is up 8.7% from 2011. PwC’s lead is less than 1% – 0.6%, to be exact – so how they stack up against each other in 2013 should be exciting to watch.
Big Four Revenues, 2007 to 2012

Source: 2012 Big Four Firm Performance Analysis
Record Year
All four accounting firms actually had a record-breaking year. Their 2012 revenues were the highest ever for each one of them. Combined, their total take of US$110.3 billion is “yet another historic record,” say the number crunchers at Big4.com – the previous all-time high was US$103.6 billion in 2011. The 2012 revenues are up 6.2% from 2011, and 24% from 2007.
Does it matter? As CFO Innovation wrote last year, “perhaps it does, to CFOs – or more to the point, investors and other stakeholders – who care about how the company’s external auditor performs in relation to its peers. In terms of reputation, the top revenue earner can be regarded as the world’s accounting firm of choice, and as such, is perceived to be the leader in terms of resources, experience and expertise.”
In terms of growth, three of the Big Four enjoy momentum, notching upward increases in the past three years (see chart below). But KPMG needs to rev it up – its revenue increase was the slowest in 2012, at only 1.4%. In contrast, its peers saw their sales rise by at least 6.7%.
Wind Behind Their Back, Save KPMG 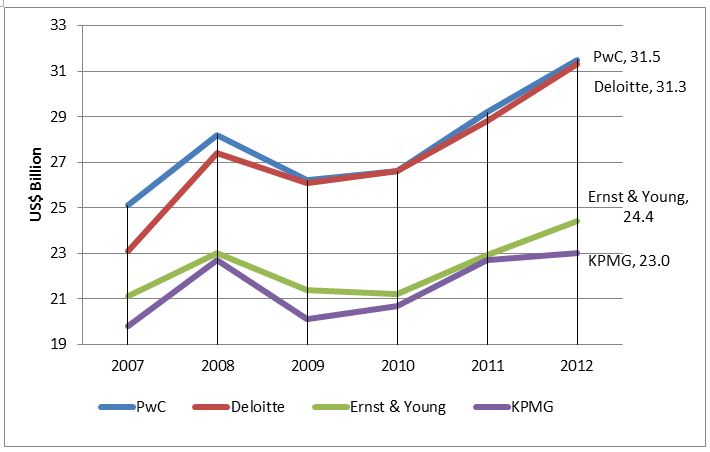 Sources: 2012 Big Four Firm Performance Analysis, CFO Innovation
“KPMG’s modest growth is well out of line with peers,” note the Big4.com researchers. “Our analysis shows three factors: Europe is 50% of global revenues and was negatively impacted by US dollar appreciation versus the euro, Advisory service line had modest growth and Audit presumably lost some relative market share.”
Indeed, KPMG is nowhere in the list of Big4.com’s “2012 Growth Stars,” the elite group of accounting firms that led all others in growth rates broken down by service lines and geographical areas. They are:

Asia and Other Star Markets
In the first half of 2011, a recovery in the global economy and robust growth in emerging markets, including Asia, boosted the Big Four’s revenues to a record high for the year. The question was whether this would continue in 2012, because the economic problems of Greece, Ireland and Spain, and Italy to a certain extent, had spilled over to the EU and the rest of the world by late 2011.
Without the Euro Crisis, Big Four revenues might have had been higher. Still, says the Big4.com analysis, “2012 results continued the strong trend seen in 2011, though not at the same pace . . . driven by strong emerging markets, robust equity markets, and global economic growth and heightened deal activity.”
In 2011, Asian revenues surged 17.4% to US$17 billion, the seventh year in a row that Asia was the fastest growing region for the audit firms. Last year, the growth was halved to just 8%, to US$18.5 billion. That was still much faster than growth in EMEA (Europe, Middle East and Africa) at 3.3%, but a bit slower than growth in the Americas (the US, Canada and Latin America) at 9.2%.
Since 2004, Big Four revenues in the Asia Pacific (which includes Australia, China, India, Japan and Southeast Asia) “have more than doubled from US$7 billion in 2004 to US$18.5 billion in 2012,” Big4.com notes.
At about 17%, the region is still the smallest region for the Big Four. EMEA accounts for the largest share of combined revenues, at 43%, followed by the Americas, at 40% (see chart below). But Asia is clearly the up-and-comer – it accounted for just 12% of combined revenues in 2004 – as Big Four billings power ahead especially in China, India, Korea and Vietnam.
Big Four 2012 Revenues, by Region 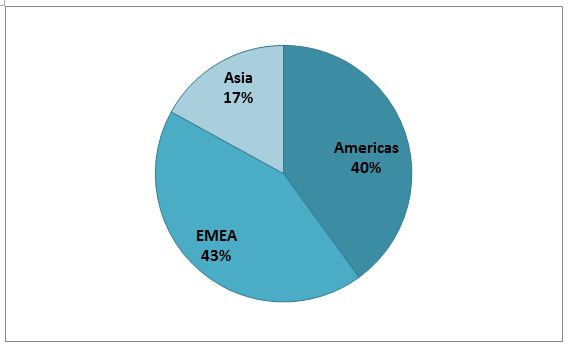 Source: 2012 Big Four Firm Performance Analysis
In contrast, the Americas accounted for 43% of combined revenues in 2005. Big4.com attributes the “noticeable drop” of three percentage points in 2012 to slower growth in the mature markets of the US and Canada, which were unable to keep pace with the robust increases in Mexico and South America.
EMEA accounted for 48% of total Big Four revenues in 2008. The five-percentage-point fall to 43% last year can be attributed in part to the “volatility and uncertainty regarding Greece, Italy, Portugal and Spain in 2012.”
The analysis notes, though, that the Big Four firms have enjoyed “spectacular growth in Eastern Europe as these high growth economies have matured into capitalistic markets, requiring sophisticated audit, tax and transaction services.” The Middle East and Africa are also showing signs of taking off, albeit from a smaller base.
Behind KPMG’s Slowdown
Analysed at the accounting-firm level, the regional breakdown in revenues might explain why KPMG did not grow as fast in 2012 as Deloitte, Ernst & Young and PwC, the Big4.com analysts speculate. “KPMG Europe is 50% of KPMG Global revenues, thus a much larger percentage share compared to its peers,” they write (see chart below).
Big Four 2012 Revenues, by Region and Accounting Firm 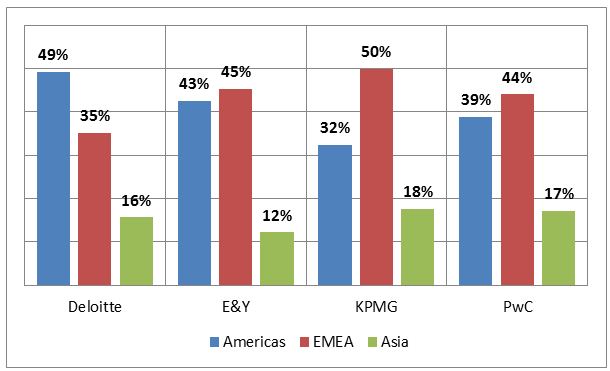 Sources: 2012 Big Four Firm Performance Analysis, CFO Innovation
The second factor is KPMG’s growth in advisory revenues, which while creditable at 8.3% on a local-currency basis, is slower than PwC’s 16.9% rise, and the 14% each notched by Deloitte and Ernst & Young. “It appears that the Advisory service line, excluding the Management Consulting service line, grew only modestly from 2011 to 2012,” says the report.
The third factor is that KPMG’s audit service line grew just 0.9% from 2011 to 2012 on a local-currency basis, slower than Deloitte’s 6%, Ernst & Young’s 4.1% and PwC’s 3.4%. According to Big4.com, “KPMG noted a fiercely competitive audit market, and seemed to have been severely impacted and perhaps lost relative market share to all its three rivals in 2012.”
In aggregate, the audit line is shrinking as a percentage of total Big Four revenues, to 45% in 2012 – down from 47% in 2011 and 52% in 2004. But it is still the biggest source of billings for accounting firms (see chart below).
Big Four 2012 Revenues, by Service Line 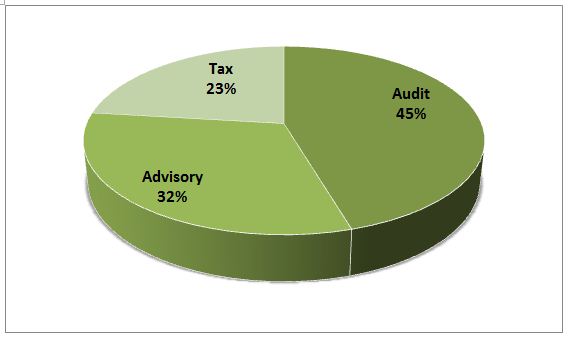 Source: 2012 Big Four Firm Performance Analysis
Advisory and Tax
Advisory – comprising non-audit and non-tax services such as transaction advisory, risk management and business consulting – increased its share to 32% of total revenues in 2012, from just 22% in 2010. Tax advisory, provided as add-on service to audit clients as well as for transactions, complicated tax restructurings and other projects, remained steady at 23% of revenues.
“Advisory is surely the star service line for all the firms,” says Big4.com, noting that combined revenues jumped 12.2% to US$36.1 billion in 2012. “Advisory services have been one of the fastest growers in the Big Four firms as the firms extend their services beyond assurance and taxation through penetration into current clients or through referrals from other firms who may be conflicted out at their clients.”
All the Big Four firms recorded brisk growth in advisory in 2012 – except for KPMG, which boosted revenues in this service line by only 4.2%. PwC increased sales by 16.7%, Deloitte by 14.1% and Ernst & Young by 12.9%. This is a red flag for KPMG, where advisory accounts for 34% of revenues – only Deloitte, at 40%, depends more on this service line (see chart below).
Big Four 2012 Revenues, by Service Line and Accounting Firm 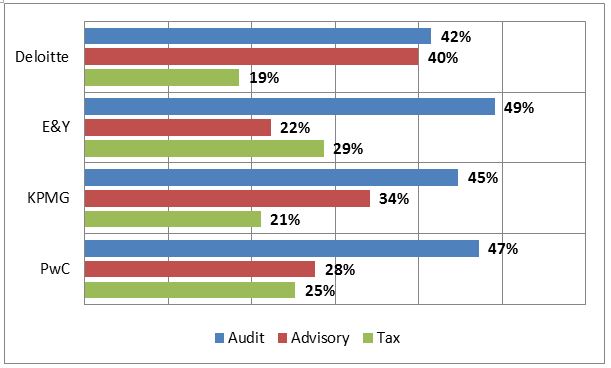 Sources: 2012 Big Four Firm Performance Analysis, CFO Innovation
Accounting as Career
By Big4.com’s count, the Big Four firms employed nearly 690,000 partners and audit, tax and advisory professionals and administrative staff across the world in 2012. That’s the highest number it’s ever been, and represents a 13.1% increase from 2011.
The 2012 data strengthens the belief that the accounting, auditing and advisory industry business is virtually recession-proof. Even in 2009, at the height of the global financial crisis, Big4.com estimates that the industry had 85,000 recruits, assuming attrition rates of 10% (Big Four attrition rates were running at 15% prior to 2008).
“In 2010, assuming that attrition rates held steady at 10%, new hires would be 55,000 or 200 per business day in one of the toughest job markets in recent history,” Big4.com reports. “In 2011, assuming that attrition rates again held steady at 10%, new hires would be 98,000 or 390 per business day.”
“In 2012, assuming that attrition rates again held steady at 10%, new hires would be 100,000+ or 500 per business day in a difficult job market,” the report continues. “Truly, Big Four firms are huge seekers of talent with correspondingly very busy recruiters even in a period of deep recession.”
But getting elevated to partner is an arduous process. “Partners form an elite class within these large partnerships, and only one in about 20 people belongs to this exclusive club,” Big4.com observes.
It estimates that the Big Four firms had 37,000 partners in 2011 atop the base of a pyramid comprised of 530,000 professionals. This means one partner was responsible for 14 professionals last year, a heavier workload than the 1:11 ratio in 2004.
The bar also continues to rise in terms of revenue-per-partner.  In 2004, the typical partner was expected to bring in and manage US$2.1 million in revenues. In 2012, revenue-per-partner exceeded US$3 million.
“Clearly,” says the Big4.com report, “making partner is only the beginning of a series of demanding client development and professional responsibilities down the road.”
Outlook 2013
Despite the unsettled problems in Europe in late 2011, Big4.com had predicted that 2012 would be a good year. It was proved right.
Today, with Europe remaining in crisis and the US still failing to come to grips with its fiscal cliff, Big4.com is once again optimistic about the Big Four’s prospects. “For fiscal year 2013, we see a 5% to 8% overall growth for all the firms, with particularly good performance in Advisory, Asia and even North America,” says the report.
The “solid factors” behind this positive forecast include:
About the Author