Slicing Up an Ever Juicier Pie: Big Four Deloitte Vs. EY Vs. KPMG Vs. PwC 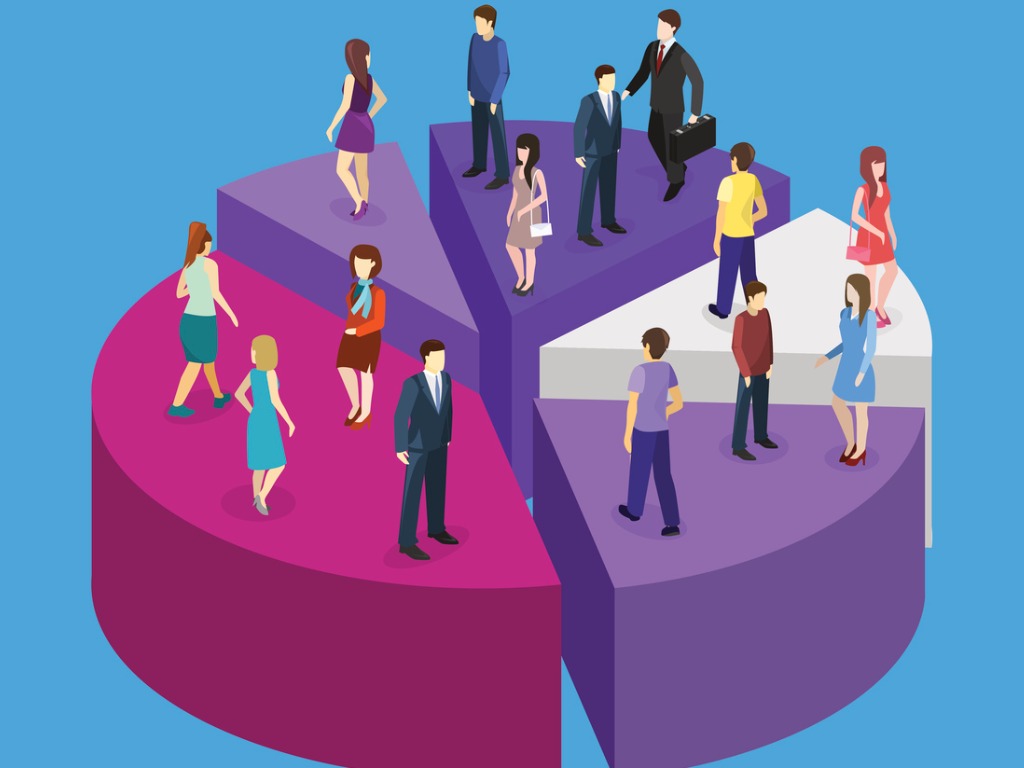 On the basis of just the headlines, the past 12 months would seem to be trying times for the Big Four accounting firms. Regulators in India has just banned PwC from auditing any of the nation’s 7,000 or so listed companies for two years for its work on Satyam Computer nearly a decade ago. Last year, Ukraine’s central bank pulled PwC Audit LLC from the registry of accounting firms authorized to audit banks for its work on scandal-ridden PrivatBank.

In South Africa, KPMG is accused of criminal breaches of the country’s company law in connection with its member firm’s audit of companies controlled by the Gupta family, which is being probed for corruption. Deloitte is also under investigation in South Africa for its audit work on troubled retailer Steinhoff International. And in the UK, EY has been fined by the Financial Reporting Council for its 2013 audit of technology distributor Tech Data.

All four accounting firms achieved yet another record year, the eighth consecutive time for Deloitte, PwC and EY, and seventh for KPMG

So the findings of this year’s CFO Innovation analysis of Big Four revenues may come as a surprise. The scandals have not dented the top line of any of the major firms. Indeed, the Big Four’s combined revenues once again broke records in 2017, for the seventh year running, at US$134.3 billion, up 5.1% from 2016.

Fiscal year to May 31, 2017 for Deloitte, June 30, 2017 for PwC and EY, September 30, 2017 for KPMG. Gross revenues are inclusive of expenses billed to clients. Local currencies were translated to US dollars at the average exchange rate for the fiscal year. Sources: Deloitte, EY, KPMG, PwC, CFO Innovation

It’s possible that the audit missteps will show up in next year’s numbers, particularly for PwC – the assurance service line accounts for 42% of its revenues. But PwC and the other Big Four appear unscathed for now, based on fiscal-2017 numbers (PwC’s latest reporting year ended June 30, 2017). It is also worth noting that PwC is appealing the Indian ban, and that the Securities and Appelate Tribunal has indicated it will hear the appeal on an expedited basis.

So who’s on top? Every year, CFO Innovation examines the business performance and priorities of the Big Four to assist CFOs and others in finance as they conduct due diligence for assurance, tax and advisory engagements. Among the metrics that we look at is the volume and growth of revenue, on the theory that increasing (or at least stabilizing) market share is a vote of confidence from clients in the quality and effectiveness of the service provider’s work.

Deloitte is now the first ever accounting firm to smash through US$38 billion in revenues. It has grown the top line by 68% from 2007, eight percentage points more than PwC

All four accounting firms actually achieved yet another record year, the eighth consecutive time for Deloitte, PwC and EY, and seventh for KPMG (whose revenues in fiscal 2015 were 1.6% lower than in the previous year, but were up 3.9% in the year to September 2017 to a record US$26.4 billion).

Deloitte is now the first ever accounting firm to smash through US$38 billion in revenues. It has grown the top line by 68% from 2007, eight percentage points more than PwC (at 50.1%). Revenues at EY and KPMG grew slower in the same period at 49% and 33%, respectively, widening the gap between them and the top two, and between themselves.

The International Monetary Fund estimates that the global economy expanded 3.6% in 2017, following 3.2% growth in 2016. The developed markets, led by the US, grew 2.2%, faster than the 1.7% notched in 2016. A growing economy implies accelerated business activity, which in turn could mean more demand for the auditing, tax and advisory services of accounting firms.

Indeed, since CFO Innovation began tracking Big Four financial performance in 2007, the only time aggregate revenues shrank was in 2009, during the depths of the global financial recession. As the chart above suggests, Big Four revenues closely track the trajectory of global GDP expansion (and contraction).

EY reported the fastest growth in advisory, at 9.6%, followed by Deloitte at 8.3%. Revenue growth from advisory at KPMG (7%) and PwC (6.3%), while substantial, was not as high, one reason why the revenue gap between them and the leaders is getting wider.

Deloitte is paying less attention to audit services compared to its peers – revenue growth from this service line was essentially zero in 2017 – after contracting minus-4.1% in 2016. In contrast, No. 2 PwC grew revenues from audit by 4.5%, following an anemic 0.7% rise in 2016.

The differing strategies partly explain Deloitte’s continuing dominance of the Big Four league table. Advisory now accounts for 57% of Deloitte’s revenues, versus 33% for PwC (see chart above). The bulk of PwC revenues still come from audit services (42%), whereas Deloitte is much less dependent on assurance (24%). 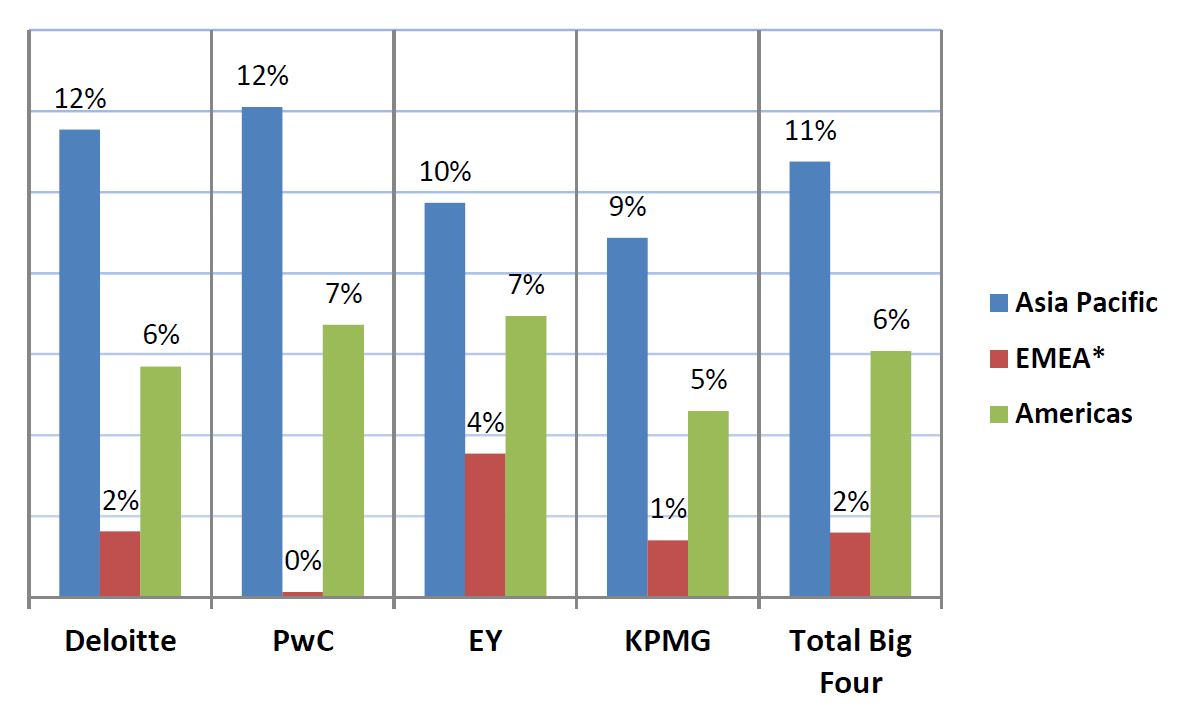 All the Big Four firms experienced double-digit revenue growth in Asia Pacific, except for KPMG (9%).

Will PwC be hurt by the two-year suspension in delivering audit services in India? “We believe that the order is also not in line with the direction of the Hon’ble Bombay High Court order of 2010 and so we are confident of getting a stay,” the Price Waterhouse Network of firms in India said in a statement sent to CFO Innovation. “The SEBI [Securities and Exchange Board of India] order relates to a fraud that took place nearly a decade ago, in which we played no part and had no knowledge of,” it added.

It is unclear whether and how revenues may be affected if the SEBI order is not stayed and PwC has to stop auditing listed companies in India for two years. While the audit service line makes up the bulk of its billings, Asia accounts for only 17% of revenues (see chart below). 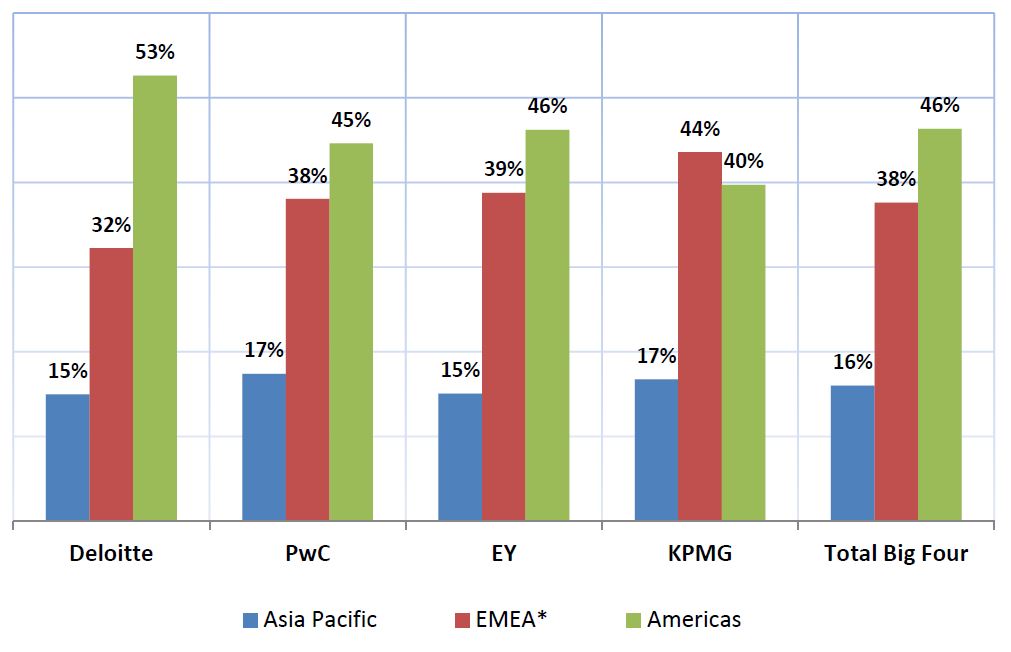 Coupled with the suspension in Ukraine, however, PwC is exposed to some reputational damage, even though the Satyam case dates back to 2009 and the audit was done by a local member firm in a country where relatively few global companies operate. In its statement, Price Waterhouse Network stressed that it had “learnt the lessons of Satyam and invested heavily over the last nine years in building a robust and high quality audit practice.”

PwC’s troubles in India and Ukraine (and KPMG in South Africa) highlight the heightened risks in providing audit services. Some in the Big Four might be forgiven for wondering why the firm should be in this service line at all, given that commoditization is also in the cards with the emergence of automation, blockchain, robotic process automation and continuous auditing.

Regulatory risk is not as high in advisory, where client demand is not likely to taper off anytime soon, given the big push among companies to digitize operations, respond to new technologies like robotics, artificial intelligence and blockchain, and protect themselves from cyberattacks. Deloitte’s focus on advisory at the expense of audit may be the template for the Big Four going forward.

Still, companies are required to be audited, so this service line could remain a bread-and-butter business for an accounting firm, Big Four or smaller, that is willing to accept the slimmer margins and higher risk, perhaps as a gateway for more profitable engagements in tax and advisory (although some jurisdictions discourage or ban companies from hiring the same firm for both audit and advisory).

The more things change, as they say, the more they stay the same. We will find out next year how true that is when CFO Innovation looks at the performance of the Big Four in 2018.