Salary Guide: How Much Is That CFO in the Window? 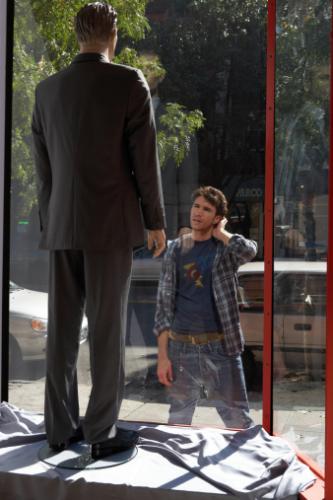 At this time last year, a CFO or Finance Director working in a multinational in Hong Kong can expect to command HK$1.2 million to HK$2.8 million in basic salary, according to the 2012 Hays Salary Guide, an annual survey by the global recruitment company of the same name.
Hays has just released The 2013 Hays Salary Guide and it seems Hong Kong’s finance chiefs can expect a fat raise. The range given for the basic salary of multinational CFOs is between HK$1.4 million to HK$3 million – that’s a 16% rise at the lower end and 7% at the top. And those numbers do not include bonuses and other incentives.
But in Singapore, CFO salaries are essentially unchanged at S$240,000 to S$300,000, for medium and large companies, and S$300,000 to S$500,000, for multinationals. If you’re a newly minted financial controller, you might even be paid lower than your predecessor was in 2012.
According to Hays, FC salaries in Singapore this year can range from S$160,000 to S$220,000 a year. That’s 11% less than the lower end in 2012 (S$180,000) and a whopping 26% down at the upper end (S$300,000).
“The market-wide focus on cost reduction within most businesses impacted salaries,” observes Hays about the Singapore market. “We also saw that many employers made below market-rate offers in the hope that they could secure candidates for less than they are potentially worth.”
CFOs and Tax Directors in Singapore, though, are likely to be paid the same in 2013 as they were in 2012, as are most finance posts in Japan. Unlike the 2012 edition, the Hays 2013 salary survey covers finance salaries in China and Malaysia.
On a purchasing power parity (PPP) basis, some salaries in China come out higher than those in Hong Kong and Singapore. For example, a tax director in China can expect to be paid up to PPP$662,000, compared with PPP$552,000 in Hong Kong and PPP$303,000 in Singapore.
What About Finance?
In general, though, 2013 may turn out to be a bit better than 2012. According to Hays, “39% of Asian employers indicate they expect to increase salaries at their next review by 3% to 6%.” Another 21% expect to raise salaries by 6% to 10%.
What’s more, 55% said they would award bonuses to at least half of their staff this year. A higher proportion, 79%, will provide other benefits, including healthcare (58%).
What about accountancy and finance specifically? In China, says Hays, fewer senior finance professionals are being recruited by Chinese organisations and private equity firms because many initial public offerings have been put on hold.
Candidates have also become more cautious and have moderated their salary expectations.   “In fact, we have seen instances of Big 4 senior candidates taking a salary cut in order to secure a corporate role,” notes Hays. “Employers too have become more cautious [although] they remain willing to offer a reasonable increase, in most cases 10 to 15%, to secure the right candidate.”
Of the various finance positions, CFOs rule in China (see chart below). They can earn up to RMB1.2 million (US$191,000) in annual salary in medium and large firms, and up to RMB2.5 million (US$397,000) in multinationals. The second most lucrative post are those of tax director and head of internal control, who can earn more than a financial controller, treasurer and head of compliance.
Annual Salaries* in China: CFOs Rule

Higher in Hong Kong
In Hong Kong, the rise in finance salaries is underpinned by demand in the retail and IT and telecommunications sectors, Hays reports.
“Driving this trend in part was the removal of travel restrictions for PRC tourists, which led to a number of high end luxury retail businesses establishing new stores in Hong Kong,” the report adds. “Such organisations offer a premium salary to secure the right candidates.”
As a result, finance and accounting salaries in Hong Kong are trending higher for CFOs and heads of compliance in multinationals, financial controllers in medium to large companies and tax directors in both enterprise types (see chart below).
Click image to enlarge
Annual Salaries* Hong Kong: Higher Pay

Some industries are not as vibrant, however. There is belt-tightening in financial services, where salaries are remaining steady, although Hays detects active areas in insurance, commercial banking and private banking.
China vs. Hong Kong
In terms purely of salaries, is it better to be a finance professional in Hong Kong or in the vast neighbour up north? To find out, CFO Innovation converted the Hays salary findings in Hong Kong and China into US dollars, using the exchange rate on 30 January 2013, and then into Purchasing Power Parity (PPP) dollars.
CFO Innovation used the World Bank’s PPP conversion factors to turn the nominal US dollar salaries into their PPP equivalents, which indicate how many US dollars or a fraction of a dollar is needed in a particular economy to buy US$1 of goods and services in the United States.
For example, the PPP conversion factor for China is 0.6. This means that a CFO in China needs to spend only US$0.60 of his or her salary to buy US$1 worth of goods and services in America. In contrast, in Hong Kong, CFOs need to spend US$0.70 to buy US$1 worth of products in the United States (the PPP conversion factor for Hong Kong is 0.7). This is because the cost of living in Hong Kong is higher than in China.
Measured by Purchasing Power Parity, it seems that it makes more financial sense to be a multinational CFO in China than in Hong Kong (see chart below). The China CFO can earn as much as PPP$662,000 a year compared with the top rate of PPP$552,000 received by a Hong Kong-based CFO of an MNC – that’s 20% lower.
Click image to enlarge
Annual Salaries*: China vs. Hong Kong 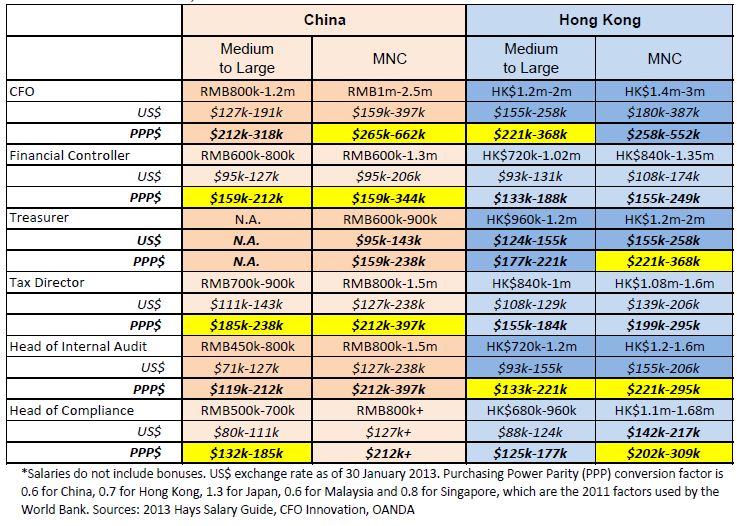 Singapore and Malaysia
Finance and accounting salaries in Singapore look stable, particularly for CFO, treasurer and tax director (see chart below). According to the Hays survey, though, financial controllers can expect to be paid lower in 2013 compared with 2012. In contrast, the heads of internal audit and compliance enjoy stronger bargaining power.
Click image to enlarge
Annual Salaries* Singapore: Compliance and Internal Audit

The salary situation appears more vibrant in neighbouring Malaysia, which Hays describes as “buoyant.” In general, multinational employers pay more than medium to large companies do (see chart below), as is typically the case.
Annual Salaries Malaysia: Go for MNCs

“Candidate expectations need to be managed,” says Hays, “with some candidates believing they will achieve a 30% to 40 % increased to their base salary when moving; the reality is closer to 10% to 15%.”
Which is the best place for finance professionals to be in, purely in terms of salary? Even adjusted for PPP, Singapore still comes out on top (see chart below). A CFO in Singapore can earn more than three times in PPP dollars than his or her counterpart in Malaysia.
Click image to enlarge
Annual Salaries*: Malaysia vs. Singapore 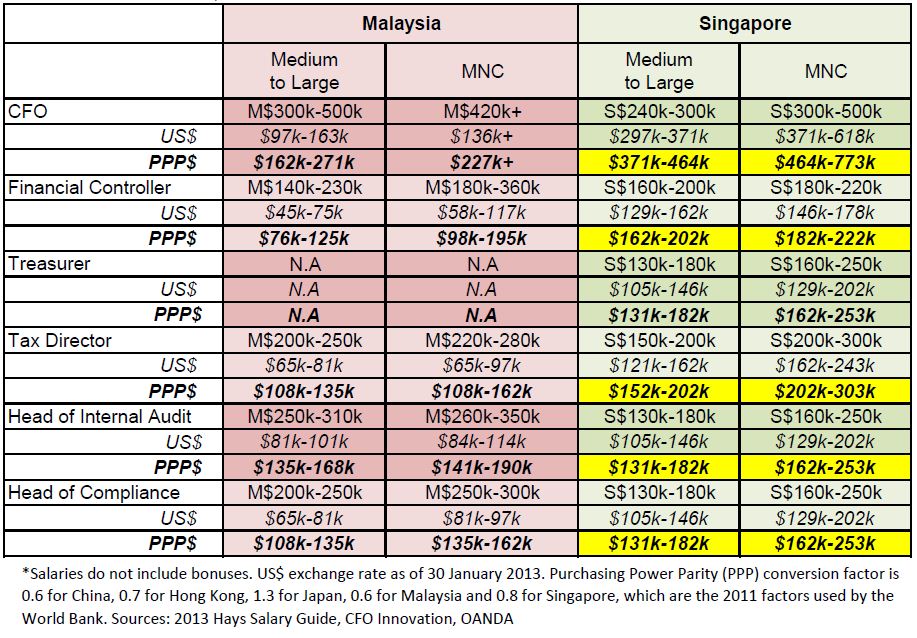 Three Financial Centres
What’s the best place to be a CFO, talking purely of salary and disregarding lifestyle, standard of living and other factors, among Asia's three financial centres -- Hong Kong, Japan and Singapore?
When the salary ranges are adjusted for Purchasing Power Parity to allow comparability, the highest paid CFOs in Asia are those who work in Singapore (see chart below). It is also most lucrative to work as financial controller (despite the clawback in salary levels) and tax director in Singapore, rather than in equally high-salaried Hong Kong or Japan.
Click image to enlarge
Annual Salaries*: Hong Kong vs Japan vs Singapore 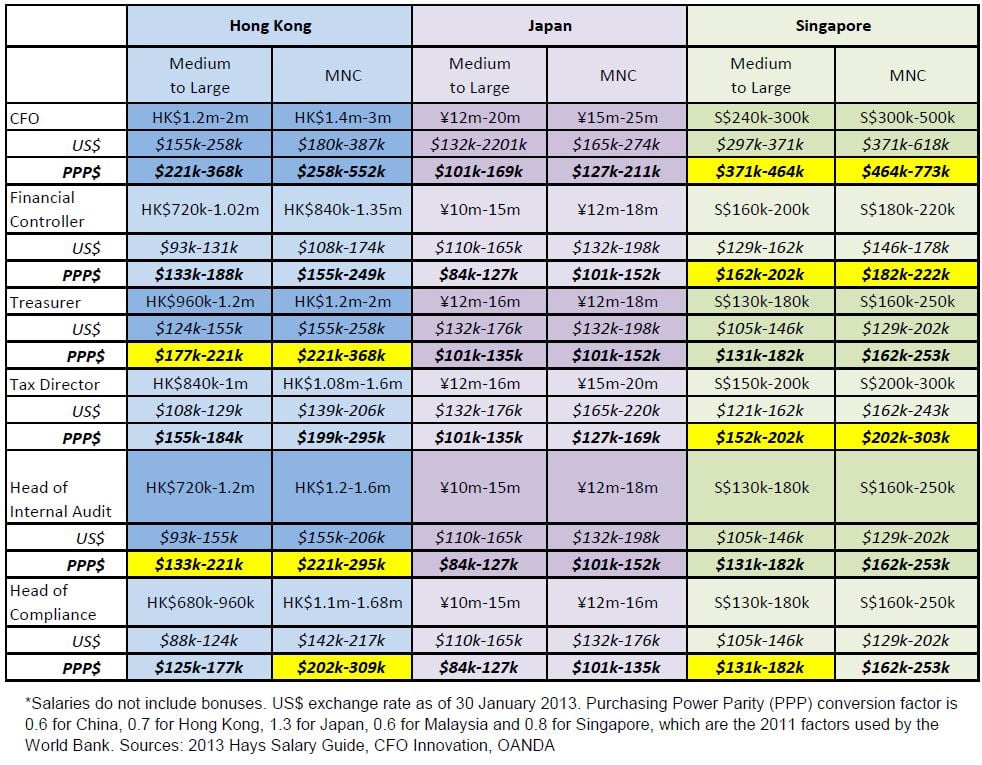 Of the three financial centres, Hong Kong pays the highest salary in PPP terms for treasurers and heads of internal audit; heads of compliance in MNCs are paid most in Hong Kong, but compliance chiefs in medium to large firms get the most in Singapore.
Japan is the laggard here. Indeed, CFO salaries in China, in PPP terms, are higher than in Japan (up to PPP$662,000 in China versus just PPP$211,000 in Japan). This is also true in nominal dollars – US$397,000 a year for a top-tier MNC CFO in China versus US$274,000 for a peer in Japan, 44% more.
Hays stresses that the salary guide is “interpretive and indicative, not conclusive,” and therefore “should be used as a guideline only.”
Still, these general numbers should help finance professionals gauge where they are in the salary market, help calibrate expectations when looking for new challenges or preparing for the annual review, and serve as guideposts in career development and planning.
About the Author