Like It or Not, Accountants Should Get Ready to Blow the Whistle 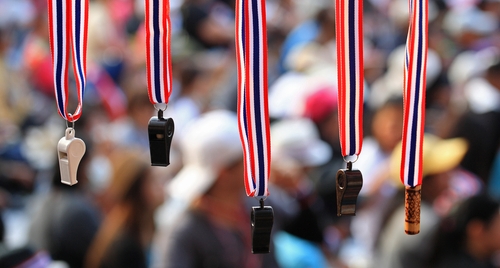 Imagine you are having lunch and across the table, two colleagues of yours are talking about your organization’s potential violation of workplace safety regulations at a construction site. Their conversation is within your earshot.

You are the company’s accountant and you understand the grave consequences the potential violation may bring. What do you do? Is walking away an option?

Besides relying on your moral compass, global ethics standards may soon provide guiding principles to aid you in resolving such a dilemma.

Accountants generally want to do the right thing. However, in the real world, whistleblowing often creates a dilemma

Revising the Code of Ethics

Currently, the International Ethics Standards Board for Accountants  is engaging regulators, the profession, company directors and other stakeholders around the world on proposed (and controversial) revisions to the international Code of Ethics for Professional Accountants.

One proposed revision will mandate that accountants should not turn a blind eye to a suspected non-compliance with laws or regulations – known as NOCLAR – that comes to their attention (such as the hypothetical example of the accountant overhearing a conversation about workplace safety).

This is regardless of whether the suspected NOCLAR creates an impact on the financial statements of the company.

If management’s response is not acceptable, he or she should also involve those charged with governance (known as TCWG). This group would be the board of directors and, in the case of a listed company, would also include the audit committee.

The professional accountant’s responsibility does not end there. According to the proposal, should he decide that the matter could have significant consequences for his organization or his client or others, he has to evaluate whether TCWG had taken appropriate actions to address the issue, including whether the matter has been adequately reported to a relevant authority (e.g. a law enforcement agency).

On this note, the International Ethics Board has also recently organized a series of regional roundtables to seek feedback on whether the accountant should breach confidentiality. Should accountants be expected to whistleblow the matter directly to the relevant authority, if he or she finds that it has not been adequately addressed?

The fears include risk of physical harm, unfair dismissal and being sued for reporting a matter that turns out not to be true

Accountants generally want to do the right thing, including escalating significant issues to TCWG and to an authority. However, in the real world, whistleblowing often creates a dilemma.

Firstly, any whistleblower has to grapple with the problem of wanting to do the right thing while fearing personal reprisal and potentially implicating loved ones. Such fears include risk of physical harm, unfair dismissal and being sued for reporting a matter that turns out not to be true.

Secondly, there is the concern of whether there exists an effective legal framework for the protection of whistleblowers. Lastly, there may also be the question of whether management or even the relevant law enforcement agency can be trusted.

Cynics will describe the professional accountant’s proposed new responsibility as, for the lack of a better word, intrusive. Why should he be made responsible for checking on whether or not those charged with governance report non-compliance with laws or regulations?

Nonetheless, proponents of the proposed revised code think that professional accountants should be made responsible because they belong to a profession that serves the public interest.

James M. Sylph, Executive Director of Professional Standards and External Relations at the International Federation of Accountants (IFAC), led one of the International Ethics Board’s roundtables in Hong Kong in May to further deliberate the proposals.

At the roundtable, which was attended by a wide range of stakeholders, including Singapore’s Accounting and Corporate Regulatory Authority and the Institute of Singapore Chartered Accountants, he posed a difficult challenge to participants.

“Would willfully ignoring suspected NOCLARs, particularly those that are of significance to public interest, be tantamount to not living up to the public’s high expectation of the profession to act in the public interest?” he asked.

“Is there a growing belief among regulators that retaining the status quo is eroding public trust in the profession?”

As a result of significant concerns raised by various stakeholders globally, the International Ethics Board has introduced, for debate, a new “watered down” alternative approach to the original proposal in 2012.

The original proposal made it mandatory for professional accountants to whistle-blow suspected and actual illegal acts that are of public interest (e.g. serious crimes endangering public safety) if TCWG did not adequately address the matters.

The alternative approach may be more palatable. It gives professional accountants the right to report NOCLAR to an external authority, but there will be no requirement that they should do so.

And provided that the professional accountant reports in good faith and as long as such disclosure is not prohibited by laws or regulations, he or she is permitted to override confidentiality.

One thing is for sure. The International Ethics Board believes that public expectations of the role of professional accountants are changing, and the profession must be cognizant of not eroding the trust of the public.

If a professional accountant suspects that a NOCLAR has been committed or about to be committed, such as a major financial fraud, it is becoming harder to convince the public (e.g. investors) of any justification for turning a blind eye.

Under this alternative approach, the International Ethics Board is suggesting that whistleblowing to an external authority should perhaps not be the focus.

The focus should be on the process in which a professional accountant has to go through in understanding the potential NOCLAR, confirming his understanding with the management, escalating it to TCWG if need be, and evaluating the adequacy of the TCWG’s remedial action.

This is because it is expected that the great majority of TCWG will want to know about any NOCLAR, and will want to do the right thing to remediate the matter. The internal escalation process would, arguably, bring the most significant NOCLARs to light and be properly dealt with at the TCWG level, without needing escalation to an authority.

This is true in Singapore. Given our strong corporate governance environment, those NOCLARs that come to light have a very high chance of being investigated and addressed by TCWG, especially those with grave consequences.

It would therefore be reasonable to expect that this alternative approach will receive less opposition by professional accountants in Singapore.

But some participants at the Hong Kong roundtable raised concerns even with this “watered down” alternative approach. These concerns include professional accountants runing the riks of being seen as “informants,” which may result in employers preferring to hire accountants who are not members of professional bodies.

Some raised concerns about potentially impeding the free flow of information which auditors and auditees currently enjoy.

“It will . . . be totally unacceptable for a re-exposed draft to be rejected on grounds of wanting the status quo”

Participants also asked the International Ethics Board to review certain concepts in the proposal that are not easy to apply in practice. These include the need to exercise significant professional judgment in defining “significant consequences” and in determining what matters are considered to be of public interest.

There is also the issue of a situation where the suspected NOCLAR may involve matters that are not within the area of expertise of the professional accountant.

At the Hong Kong roundtable, the Interim Chair of the International Ethics Board and Chair of the Institute of Singapore Chartered Accountants’ Ethics Committee, Kwok Wui San, empathized with the participants’ concerns.

He assured them that their comments, along with those at the roundtables in Brussels and Washington DC, will be considered carefully when redrafting the exposure draft.

The interim chair revealed that there will be revisions to the upcoming exposure draft on this topic. “The International Ethics Board commits to working towards a balanced approach,” he added. “It will, however, be totally unacceptable for a re-exposed draft to be rejected on grounds of wanting the status quo.”

The message is very clear. The revisions are here to stay. It is the extent of the refinements to those revisions that is uncertain for now.