Is It Time to Leave China for Vietnam and Other LCCs? 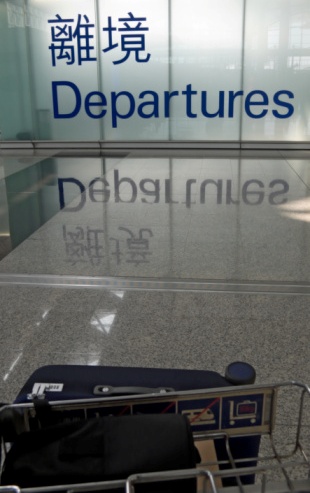 When Premier Wen Jiabao declared at the National People’s Congress on March 5 that China will continue boosting domestic consumption to rebalance the economy, local and foreign companies knew exactly what would come next.

Sure enough, the prime minister went on to say: “We will steadily increase the minimum wage of workers, basic pensions of enterprise retirees, and subsistence allowances for both urban and rural residents.” This approach is meant not only to put more money in pocketbooks and thus encourage consumption, but also to help bridge the rich-and-poor divide and ensure social stability.
But the rise in minimum wages will, of course, add to the cost of doing business. MNCs and other enterprises in China are already getting hit. On January 1 this year, the Beijing city government increased the statutory monthly wage in the capital to RMB1,160 (US$176), up 21% from RMB960, which was mandated only in June last year and represented a 20% rise.
All the country’s provinces and municipalities have announced plans to raise their minimum wage in 2011. Xu Xianping, who is deputy director of the National Development and Reform Commission, reports that five regional governments have promised to raise income growth above GDP growth while 19 others plan to raise wages at the same pace during the 12th Five-Year Plan (2011-2015).
How High Can Wages Go?
It’s all unsettling news to the legions of global companies that use China as production base. Rising minimum wages will surely raise their labour costs. “We’re going to see continued increases in wages for privately owned companies . . . at around 17% annual growth in the next three years,” says Jonathan Wright, Senior Executive at Accenture, the global management consultant.
This, even as wages in Vietnam, India, Indonesia and Asia’s other low-cost countries (LCCs) remain stagnant or rise more slowly. According to Accenture, the Chinese average hourly rate in U.S. dollar terms is now far higher than in other LCCs (see chart). The projected increases in the minimum wage this year, coupled with the strength of the renminbi against the greenback, are expected to bring the average hourly wage in China past the US$2.50 level – more than twice wages in Vietnam, whose currency has just been devalued against the U.S. dollar.
Average hourly wage, China vs. Vietnam, Indonesia and India (US$ per hour)
Click chart to enlarge 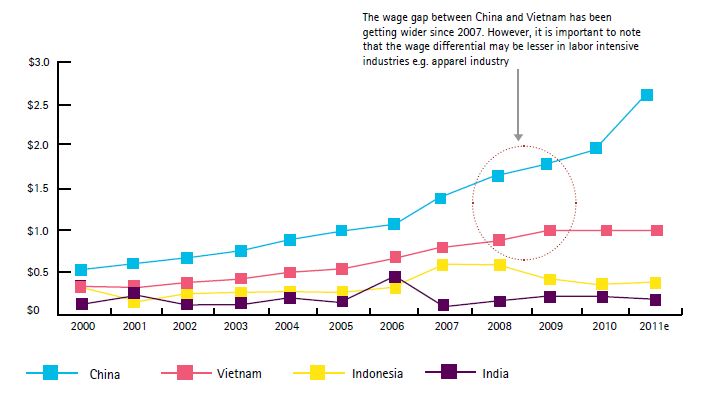 But Wright argues that MNCs in China don’t have to pull up stakes and go to Vietnam and other LCCs instead, although they can consider a ‘China-plus’ strategy in which some production can be done in another country.
“These increases can be managed,” he says, pointing to the findings of Wage Increases in China: Should Multinationals Rethink their Manufacturing and Sourcing Strategies?, a new Accenture study that analysed wage trends in three industries – apparel (footwear), heavy equipment, and high technology (personal computers) – and plotted how future salary increases will affect profit margins.
Sensitivity Analysis
As expected, Accenture tracked a steady increase in average hourly wages in the three Chinese industries over the past six years (see chart). The increase has been steepest in high technology and heavy equipment, particularly in 2009 and 2010. Wage increases in apparel, which typically requires less sophisticated skills, have been more moderate.
Average hourly wage in China by industry (in US$ per hour)
(Click chart to enlarge) 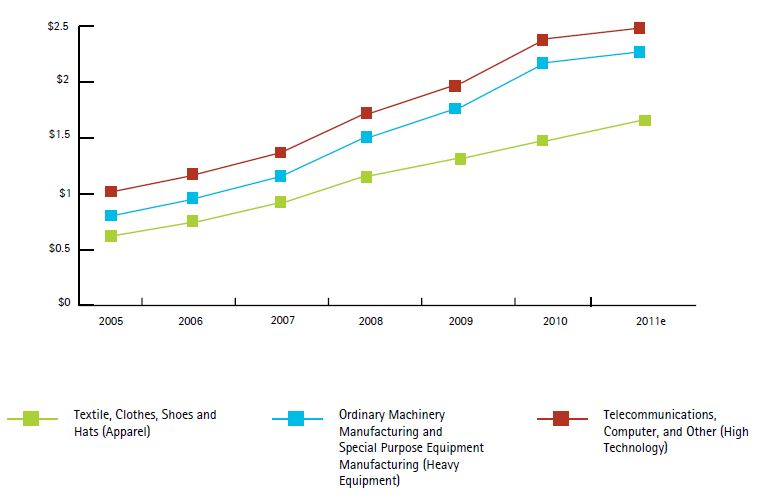 Are higher labour costs reason enough for MNCs to leave China? "There’s no need for urgent and drastic change,” says Wright, at least if the motivation for leaving China is simply the rising salaries.
After conducting sensitivity analysis on labour costs and profit levels in China’s apparel, heavy equipment and high technology sectors, Accenture concluded that MNCs which source or manufacture 40% (the industry average is 37%) of their apparel in China will need to raise retail prices by just 0.7% to maintain profit margins – even if wages rise 30% on average from current levels.
In the heavy machinery sector, companies that source or manufacture 60% (which is the industry average) of their products in China will need to raise retail prices by 1.5%. However, companies sourcing or manufacturing most of their personal computers in China (industry average: 90% -100%) will need to increase retail prices by a much more significant 4.8%.
(Click table to enlarge)

What CFOs Can Do
But labour is just one driver. “Clearly it’s not all about the labour cost,” says Wright, who is one of the report’s co-authors. “One of the reasons why we wanted to do this study is that executives around the world read about the wage increase and it created nervousness. We want them to realise that they need to manage it but they don’t need to panic.”
Wright identifies two other important drivers that will have an impact on retail prices of Chinese-made products: the cost of materials and currency exchange movements. The Accenture study, in fact, found that material cost accounts for a larger percentage of expenses (19% in the footwear industry, 21% in heavy machinery, 50% in personal computers) than does labour (3%, 4% and 20%, respectively).
“The difference is that you can hedge [material costs and currency exchange],” says Wright. “With labour costs, there’s not an awful lot you can do.” Still, hedging can take you only so far, and it can be very expensive. “And you can’t hedge too far out,” says Wright.
What can companies do? A key recommendation is to focus on operational excellence, towards the end of enhancing productivity and tightening cost management. This will help the company absorb higher labour and material costs without having to raise retail prices too much (or increase prices if they have the pricing power and thus realise higher profits).
“There are significant opportunities in China as well around the world for cost takeout and improved efficiency in manufacturing and supply chain,” says Wright. “Fifty percent of supply chain cost sits in your suppliers’ own supply chain, and therefore the collaboration, the ways of working between vendor and customer, become significant.”
Accenture research shows that there are significant overlaps in customer and vendor inventories, original design manufacturing and other operations. “The more collaboration, the more improved ways of working,” says Wright. “In the relationships they have, in the flow of information . . . there’s a great opportunity to absolutely counteract the increasing labour costs [in China].”
The idea of supply-chain collaboration has been around for years, but Wright says it may be reaching critical mass. “Technology is now becoming appropriate,” he says. “I think the mind-set of executives is becoming appropriate, too. The technology and this mind-set to drive collaboration mean that we are potentially at the beginning of new ways of working.”
The traditional supply chain of “buy-make-move-sell is being replaced by ecosystems of partnerships, of collaborative joint ventures, of long-term relationships,” says Wright. Companies are driving a red line through their organisation to delineate what their core and non-core competencies are. Their partners, which can include outsourcing and cloud services providers, can then take over those non-core functions.
China-Plus
Should MNCs pull up stakes in China and move to Vietnam and other LCCs? “You’ve got to look at landed cost or total cost to serve,” warns Wright. The cost of labour may be lower in other LCCs, but what about their infrastructure? Can you get cotton and other raw materials from the port to the factory and the finished goods from the factory to the port in a cost-effective and timely way?
Wright argues that companies should consider China’s relatively strong infrastructure compared with that in ASEAN before making a decision. “These factors should come into play as they look at materials cost, as well as the manufacturing, sourcing and supply chain infrastructures,” he says.

A China-plus strategy can be devised in which the company expands to western and central China and also to other LCCs like the ASEAN countries. Beijing launched a ‘Go West’ campaign in 2000 that grants tax breaks and other perks to enterprises that move into those areas, where workers are willing to accept lower wages than in the eastern coastal cities since they don’t have to leave home.

That’s a short-term fix, though, which is why Wright also suggests finding sourcing suppliers in Vietnam and other LCCs to lessen the impact of rising labour and other costs in China. But MNCs adopting this China-plus or integrated regional supply chain strategy must be ready to deal with cross-border trade movements, product quality issues, political and economic instability and institutional voids in those LCCs.
The beauty of the China-plus approach, though, is the potential for the MNC to sell into the vibrant Chinese and LCC domestic markets, in addition to exporting its products to the West and other developed countries. “Now what is required is for organizations to understand how to leverage on increasing local demand,” says Wright.
In other words, companies can turn China’s labour costs to their advantage by selling to those newly empowered consumers themselves. In effect, they'll be getting back (and more) what they pay out in higher salaries in the form of increased revenues.
About the Author
Cesar Bacani is Editor-in-Chief of CFO Innovation.
Read more on
financial management foreign exchange China