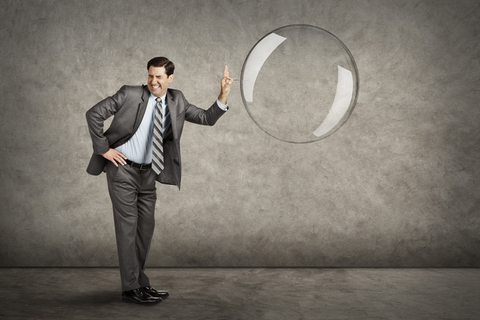 One of China’s largest ERP vendors Kingdee (00268.HK) is a bubble that relies on sector-specific tax breaks, government grants, property investment gains, and questionable transactions to book any profit at all, said Hong Kong-based independent stock commentator David Webb on his own website today.

The Hong Kong-listed tech firm fell 14% at the close Monday as the worst performer on the Hang Seng Composite Index.

Webb, a former investment banker, didn’t mention if he had a short position in Kingdee’s shares.

Kingdee had rallied 53% this year through Friday’s close to near a record high, trading at 60 times projected earnings. Its latest annual report was welcomed by analysts, many of whom raised their price targets on the stock after Kingdee said revenue from cloud services surged nearly 50%.

Webb said there’s clearly a real business—enterprise software at the company, but “it just rarely or barely makes a core operating profit and is heavily dependent on state favors to the sector.”

“It’s run by people who appear to be comfortable with out-and-back transactions over Cloudhub, lending to businesses controlled by the chairman, investing shareholders' money in wealth management products and starting up a microfinance business,” he writes on his website.

According to Webb, Kingdee sold 85% of Cloudhub—primarily engaged in mobile Internet enterprise services—to its chairman and CEO Robert Xu in 2016.

“The company’s uncomfortable with the idea of independent shareholders talking to independent directors at AGMs. It's difficult to attach much value to such a business and if this is "the Chinese management model" then we'll manage without it, thank you,” he commented.

Webb questions why Kingdee holds all its AGMs in Shenzhen though it’s only listed in Hong Kong.

“This makes attendance challenging, particularly if you don't have a Mainland Travel Permit or a visa,” he said. “We suspect non-employee attendance is minimal. AGM locations should not be chosen for employees who can see their bosses any day that they are available—they are an annual opportunity for outside shareholders to meet with all the directors.”

“It’s a breach of then Corporate Governance code provision A.6.7, even though Kingdee claims to have conformed with the code,” he added

Kingdee has a net tangible asset value of HK$1.58 per share including $0.74 of net cash and investments and $0.63 of investment properties, which provides some modest underpinning, Webb poitned out.

But Xu's 24% stake oisn't enough to prevent activists pushing for change after the bubble bursts, he noted

“So some of that value could be extracted, but as the stock is trading at 6.7x book value. At this point it doesn't matter,” Webb pointed out.

Without addressing issues raised by Webb, Kingdee responded on Monday by saying that the company's management is confident about the company’s future and considers its strategy a success.