Battle of the Big Four Firms: A Former Number One Reclaims the Crown 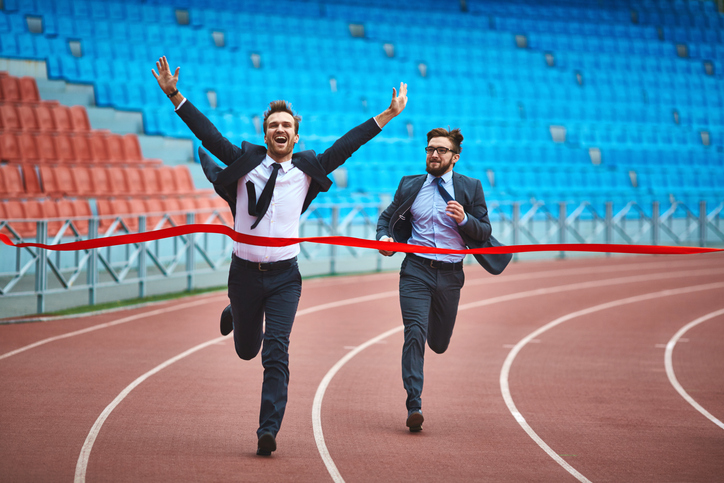 Every year, CFO Innovation tallies the revenues of the Big Four accounting firms in US dollar terms and takes a look at their priorities and the structure of their business to help CFOs and other finance executives with their due diligence on assurance, tax and advisory engagements.

For fiscal year 2015, the bragging rights as the biggest of the Big Four accounting firms went to PwC, which reported revenues of US$35.4 billion.

All the Big Four firms notched record sales, the seventh consecutive year for Deloitte, PwC and EY, and a return to record territory for KPMG

Add one more feather to Deloitte’s cap. From 2007 to 2015, PwC had topped the revenue leagues six times. It was in 2010 that Deloitte first got to No. 1 – beating PwC by a very narrow margin of just US$9 million. Since then, Deloitte has been the leader three more times.

Now, Deloitte has pulled away by a substantial margin in fiscal 2016. Its revenues were around US$900 million larger than those of PwC. In last year’s league table, PwC’s lead over Deloitte was a much slimmer US$200 million. 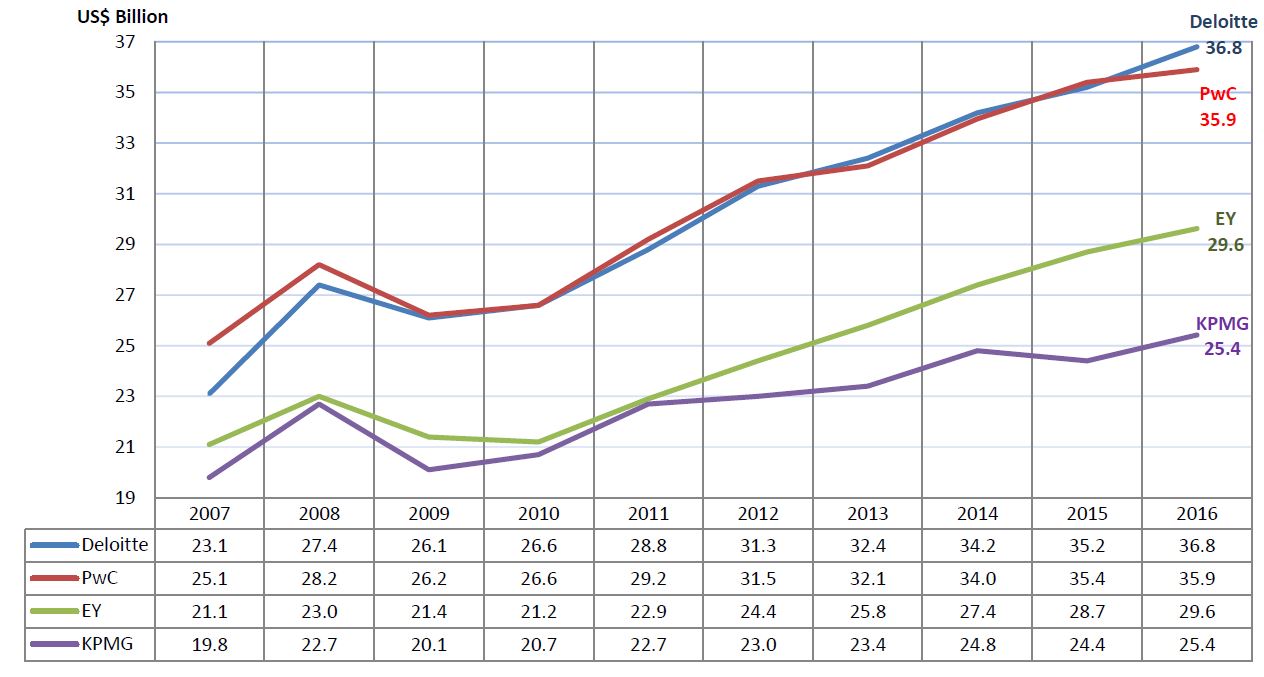 Fiscal year to 31 May 2016 for Deloitte, 30 June 2016 for PwC and EY, 30 September 2016 for KPMG. Gross revenues are inclusive of expenses billed to clients. Local currencies were translated to US dollars at the average exchange rate for the fiscal year. Sources: Deloitte, EY, KPMG, PwC, CFO Innovation

All the Big Four firms, however, notched record sales, the seventh consecutive year for Deloitte, PwC and EY, and a return to record territory for KPMG (its revenues in fiscal 2015 were 1.6% lower than in the previous year, but were up 4.2% in the year to September 2016 to a record US$25.4 billion).

Deloitte has now become the first accounting firm in history to smash through the US$36-billion revenue threshold.  It has grown revenues by 48% from 2007, more than ten percentage points than PwC at 35%. Revenues at both EY and KPMG grew relatively slower over the same period, at 30% and 25%, respectively.

Back on the Growth Track?
Year-over-year change, Big Four revenues

It’s the sixth time in a row that the Big Four as a collective jumped to a new high after revenues plummeted by 7.4% in 2009, at the height of the global financial crisis. And the pace of growth is improving. The 3.3% rise in total revenues is better than the 2.8% increase in fiscal-2015, though slower than the 5.9% pace in fiscal-2014 – and far below the double-digit growth before the Global Financial Crisis. 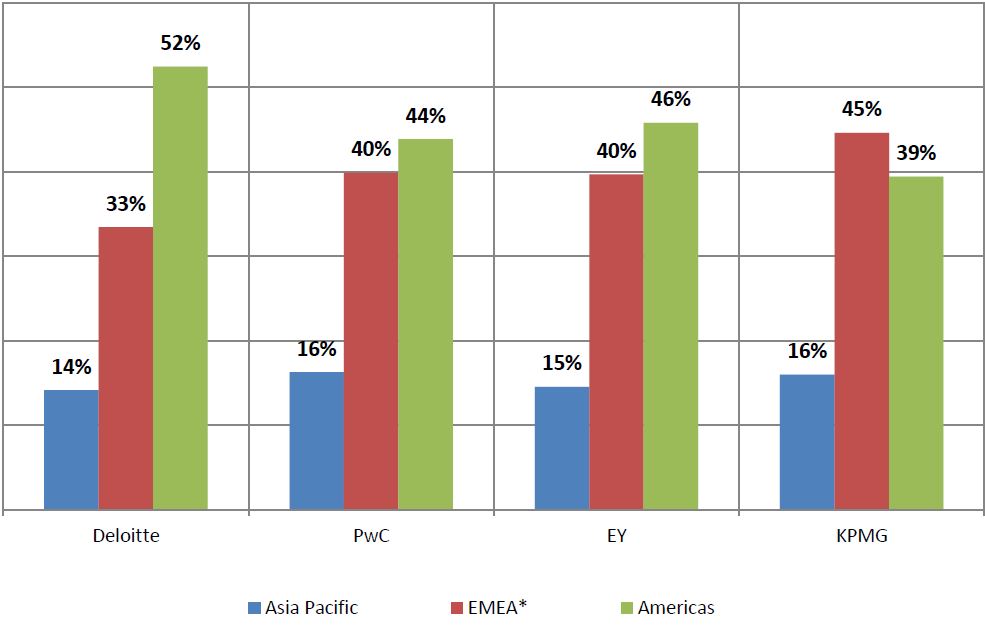 KPMG sourced the majority of its revenues from Europe, the Middle East, India and Africa (45%), and only secondarily from the US and other places in the Americas (39%). Still, the perennially smallest member of the Big Four grew revenues by 4.2% in US dollar terms – and double that in local-currency terms. This, after revenues shrank minus-1.6% in fiscal 2015 in USD terms. 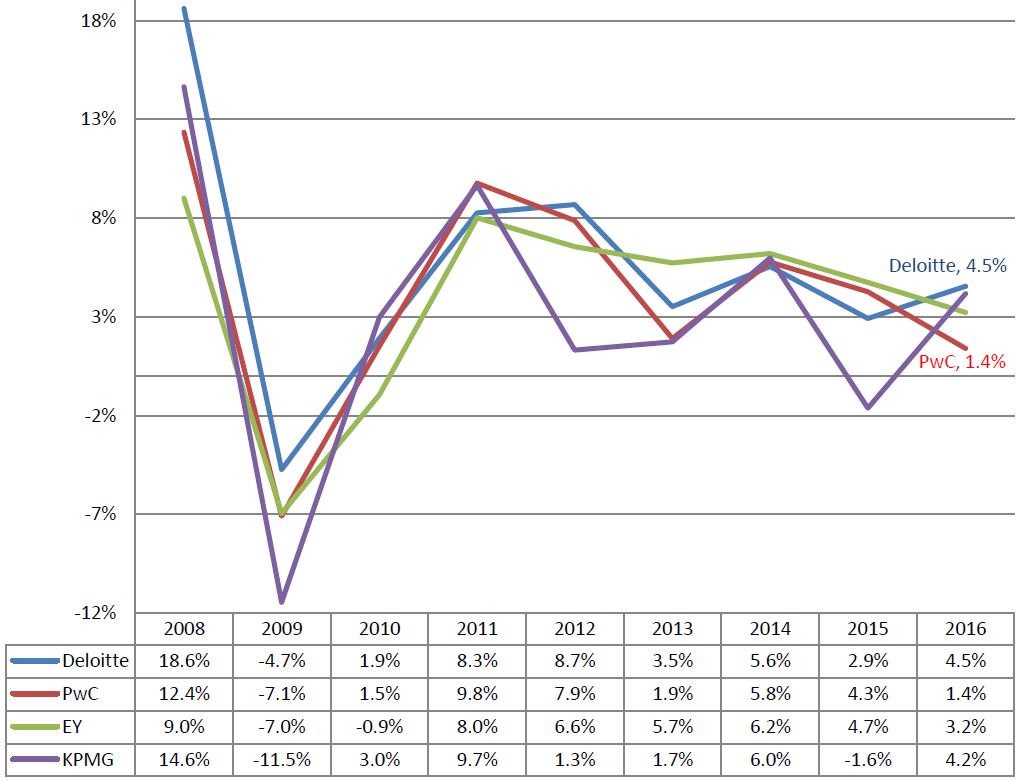 In contrast, PwC expanded revenues by only 1.4%, enabling Deloitte to overtake the erstwhile leader with its 4.5% growth, the most robust pace of the Big Four. This is a reversal of fortune. In fiscal 2015, Deloitte managed to increase revenues by only 2.9%, while PwC had shot ahead with 4.3% growth.

Why is Deloitte once again pulling ahead of PwC? One suggestive answer is the difference in their focus with regards to service lines. Deloitte has been aggressively tweaking its business model to place more emphasis on advisory (including consultancy and financial advisory), while PwC is still largely dependent on audit. 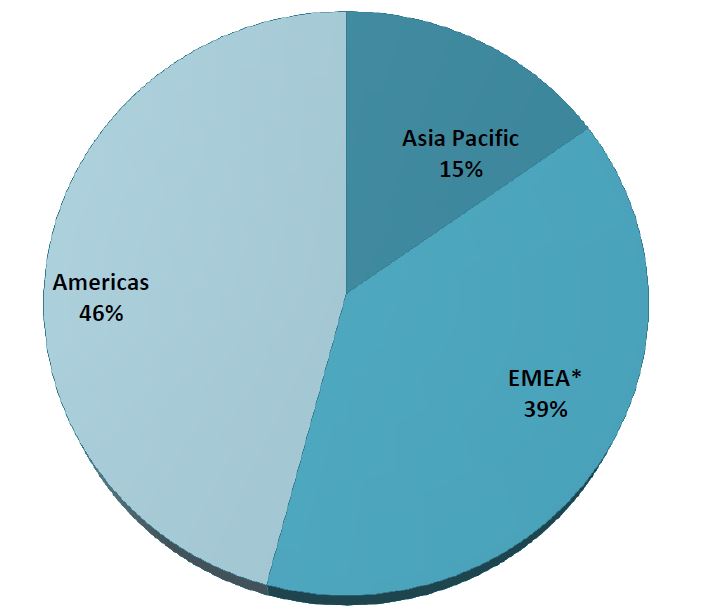 The 4% increase in Asia revenues continues the 2% in-dollar-terms rise in 2015. Big Four revenues had contracted in Asia in 2013 and 2014, but even in those years, local-currency revenues had grown strongly, even as the strong American currency eroded the amounts in US dollar terms.

The Big Four continued a hiring spree in 2016 – their combined workforce of 887,650 partners, professionals and administrative staff is 8.4% larger than in 2016

In 2016, local-currency revenues in Asia were up 10.3% for PwC, an improvement over 2015’s 9%. “More of our revenue growth is now coming from developing markets and this was particularly true in Asia where revenues grew by 10%, with strong performances in India and China,” says PwC.

Asian revenues at KPMG were higher by 9.8% in local-currency terms, an improvement over the 8.2% growth rate in 2015.

The good news is being felt by Asia’s finance professionals in accounting, tax and consultancy, as well as other specialists in those service lines. The Big Four continued a hiring spree in 2016 – their combined workforce of 887,650 partners, professionals and administrative staff is 8.4% larger than in 2016, on the heels of a previous 8.3% increase in combined staffing in 2015.

At EY, total workforce numbers surged 9.2%. The highest growth in people resources was in advisory (15.6%) and transaction advisory services such as capital management, divestitures and restructuring (14%), underlining the firm’s emphasis on those service lines – although people numbers were also up in assurance (7.5%) and tax (7%).

Deloitte grew risk advisory revenues by 22.5% last year on the back of demand for cyber and regulatory services

The Big Four’s robust people expansion, particularly in advisory, could mean that CFOs would be getting access to better quality services from a deeper bench of specialists in such new areas as cybersecurity, automation, artificial intelligence, Internet of Things and blockchain. These emerging technologies are seen as forcing change on financial processes like planning and forecasting, procurement and trade finance.

Change is also coming in bread-and-butter assurance and tax, as new regulatory requirements such as a discussion of Key Audit Matters in the audit report are imposed. The concept of continuous auditing is also gaining traction as automation allows the generation of real-time data from financial and other processes. In taxation, transnational companies of a certain size are facing new reporting requirements from the BEPS initiative being adopted by many countries.

“We’re still early in the journey,” write Punit Renjen, Deloite Global CEO, and Board Chairman David Cruickshank in the firm’s annual report. Like its Big Four peers (and some smaller organizations), Deloitte has been acquiring consultancy and other specialist firms to beef up advisory services. It notes that risk advisory grew revenues 22.5% last year on the back of demand for cyber and regulatory services.

As the Big Four firms digest and integrate these and previous acqusitions, we may see a re-ordering of the accounting-firm league table in the coming years.