Accounting Firms: A New Leader Among the Big Four 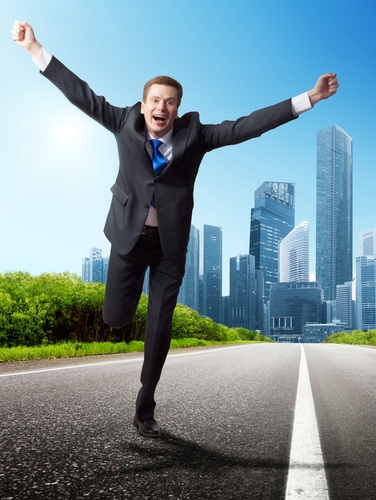 For all but one year from 2007 to 2012, PwC was the world’s biggest accounting firm, notching up revenues ahead of Deloitte, EY and KPMG. It was only in 2010 that Deloitte managed to top the league table – edging out PwC by the narrowest of margins, at US$9 million.
The fiscal 2013 numbers are in, and the planet’s new No. 1 accounting firm is . . . Deloitte, the New York-headquartered company founded in London in 1845. And this time it pulled away from PwC by a more substantial US$300 million, although the difference is still a paper-thin 1%
This is only the second instance since the global financial crisis that Deloitte has topped PwC. Deloitte reported billings of US$32.4 billion for the fiscal year to 31 May 2013 while PwC had turnover of US$32.1 billion in the year to 30 June 2013. These are record highs for both companies.
At US$25.8 billion, EY (formerly known as Ernst & Young) set a new record as well, as did KPMG (US$23.4 billion, also a personal best).
It’s more about bragging rights, of course. A public accounting firm with revenues in the double-digit billions is a formidable partner for any CFO, regardless of how it fares in the Big Four ranking. And there is not going to be a Big Five any time soon. The next-ranked accounting firms are still way behind in fiscal 2013 revenues, with BDO at US$6.4 billion and Grant Thornton at US$4.5 billion.
Still, everyone loves a winner. And Deloitte can plausibly claim to be the world’s accounting firm of choice and the first among equals in terms of resources, experience and expertise.
“Deloitte has made strategic investments in important markets, the right businesses and talented people,” says Barry Salzberg, Global CEO of Deloitte Touche Tohmatsu Limited. “As a result, Deloitte is helping many more clients navigate the changing business environment.”
Third Time Lucky
In total, the Big Four firms grew revenues to a record US$113.7 billion in fiscal year 2013, up 3.2% from fiscal 2012.
Click image to enlarge
Onwards and Upwards
Big Four revenues, US$ billion 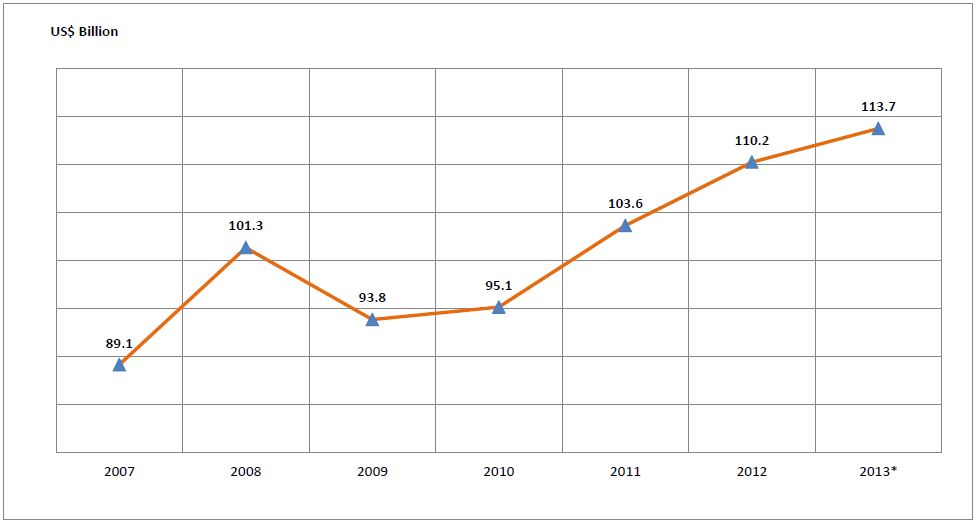 *Fiscal year to 31 May 2013 for Deloitte, 30 June 2013 for PwC and E&Y, 30 September 2013 for KPMG. Gross revenues are inclusive of expenses billed to clients. Sources: Deloitte, EY, KPMG and PwC
This is the third time in a row that the Big Four had notched a new high after turnover fell 7.4% in 2009. But the pace of growth appears to be slackening. The 3.2% growth in 2013 billings over 2012 is half the increase in 2012 and 2011 in US dollar terms.
Click image to enlarge
Slowing Growth
Year-over-year change, Big Four revenues 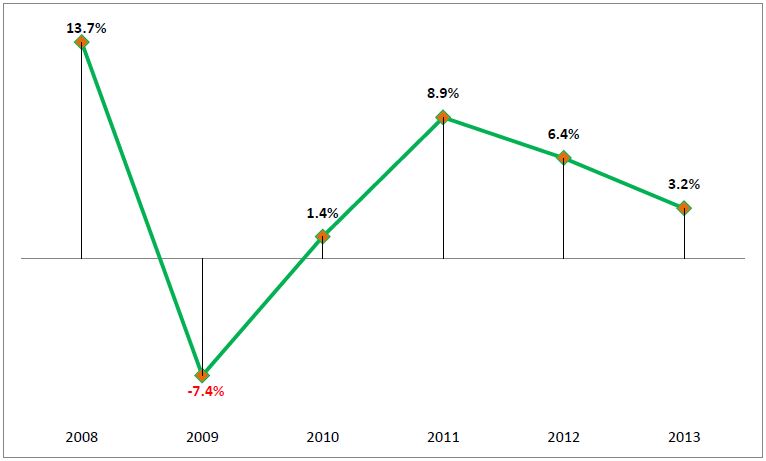 Local currencies were translated to US dollars at the average exchange rate for the fiscal year. Sources: Deloitte, EY, KPMG, PwC, CFO Innovation
Part of the deceleration is due to the strengthening of the US dollar in the middle of the year. Deloitte’s local-currency revenues actually grew 5.6%, but this gets curbed to 3.5% in US dollar terms. At a constant exchange rate, says PwC, its gross revenues increased 4% – compared with 1.9% at the average exchange rate for fiscal 2013.
A strong US dollar probably contributed to Deloitte’s market-leading performance in 2013 because it derives the majority of its revenues (51%) from the Americas. The US “produced particularly strong growth,” reports Deloitte, “contributing more than 80% of the network’s total revenue increase.”
In contrast, 43% of PwC’s gross revenues come from Europe, Middle East and Africa, while the Americas contribute 41%. Revenue growth was up only 2% in Western Europe and 3% in Central and Eastern Europe, compared with a 7% rise in North America and 9% in South America.
Laggard KPMG
In US dollar terms at the average fiscal 2013 exchange rate, the Big Four firms grew their business nicely, particularly EY at 5.7%. But KPMG increased revenues by only 1.7% – similar to its sluggish 1.3% rise in 2012.
Click image to enlarge
Big Two, Next Two
Big Four Revenues 2007-2013 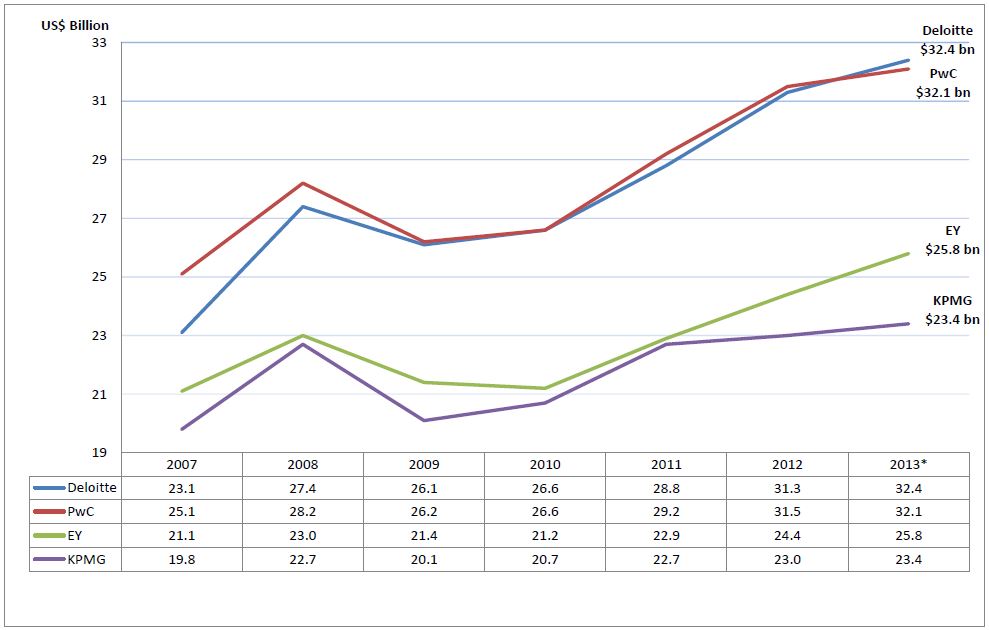 *Fiscal year to 31 May 2013 for Deloitte, 30 June 2013 for PwC and E&Y, 30 September 2013 for KPMG. Sources: Deloitte, EY, KPMG and PwC
Compared to its peers, KPMG has consistently been the laggard since 2007, when its revenues were at US$19.8 billion while No. 3 EY was at US$21 billion, Deloitte at US$23.1 billion and PwC at US$25.1 billion. KPMG’s turnover shrank the most in 2009, the height of the global financial crisis, at minus-11.5%, whereas EY and PwC fell around minus-7% each and Deloitte a much better minus-4.7%.
Like PwC, KPMG seems to be held back by its exposure to Europe – 50% of its 2013 revenues came from EMEA (a geographical segment into which KPMG includes India, for some reason). The Americas contributed only 34% of KPMG revenues, unlike, say, EY, which has the Americas accounting for 42% of sales.
Click image to enlarge
Big Four 2013 Revenues
By accounting firm and region 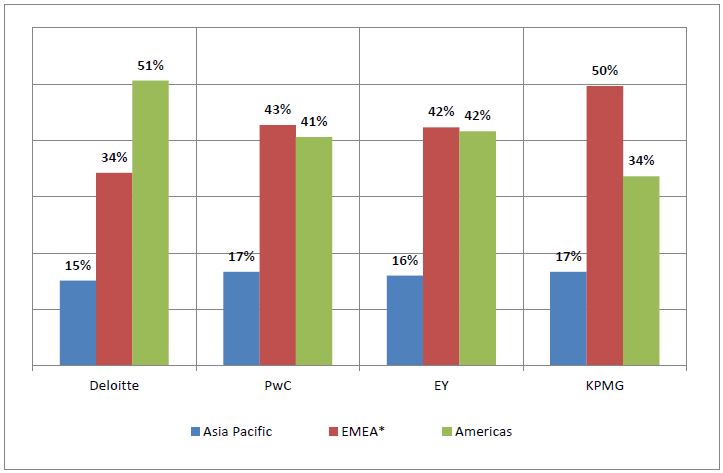 *Includes India, for EY and KPMG.  Sources: Deloitte, EY, KPMG and PwC
Service Lines
The mix of service lines may also be a factor in KPMG’s relative underperformance. Audit accounted for 44% of 2013 revenues while advisory comprised 35%. In contrast, Deloitte has 41% from advisory and 40% from audit.
As it happens, it is advisory, rather than audit, that is the fastest growing service line for accounting firms in 2013. Revenues from advisory jumped 6.8% compared to 2012, while audit stayed basically the same at 0.2%.
KPMG did grow advisory revenues by 4.8% to US$8.2 billion, but that is below the industry average and is the slowest pace among the Big Four. EY experienced the fastest growth of 11.5% to US$7.9 billion, followed by Deloitte at 6.5% to US$13.2 billion and PwC at 5.3% to US$9.2 billion.
Click images to enlarge
Big Four 2013 Revenues
By accounting firm and service line 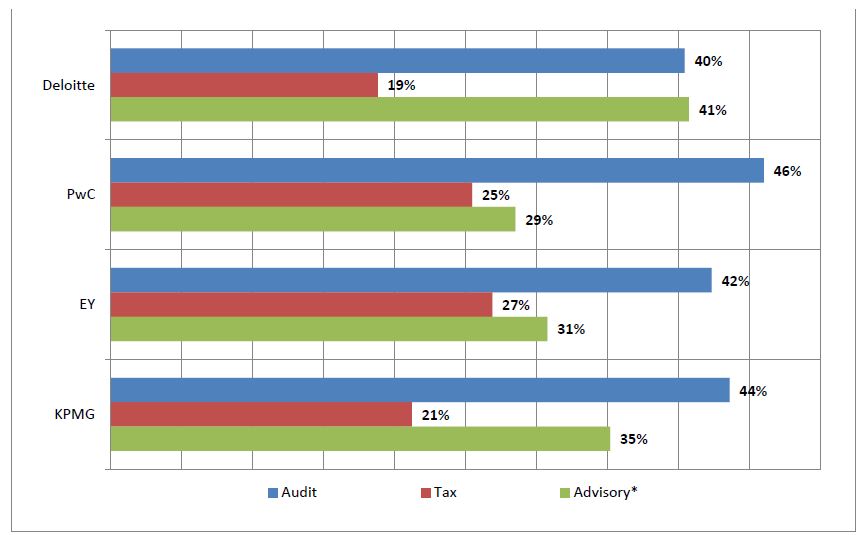 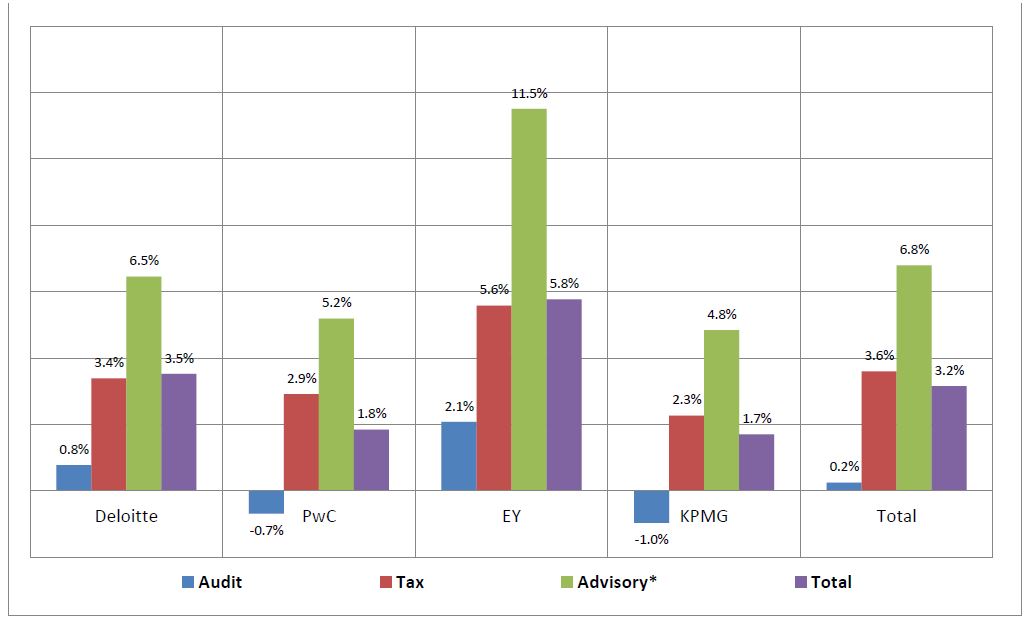 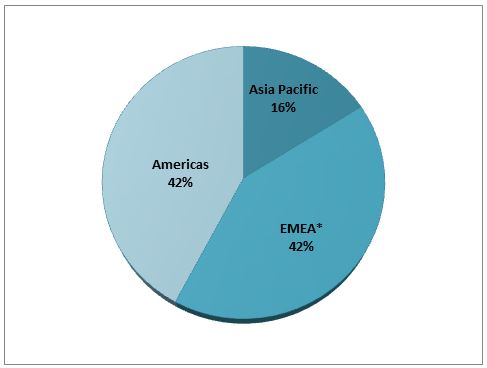 *Includes India, for EY and KPMG. Sources: Deloitte, EY, KPMG and PwC
The decrease in Asia revenues is the first contraction in US dollar terms in the past seven years. This is likely to be a function of the robust dollar. Japan has engineered a big fall in the yen against the greenback as part of Abenomics, which aims to raise inflation to 2%, while Asian emerging-market currencies depreciated in May (the rupiah more than most) after the US Federal Reserve indicated it would start tapering its quantitative easing.
Asian revenues actually grew in local currency terms – by 3.1% at Deloitte, for example (but minus-0.2% in US dollars), and 1.1% at KPMG (but minus-4.2% in US dollars). At EY, revenues from Japan increased nearly 1% in yen, but fell minus-9.5% in USD.
As for PwC, it managed to grow local-currency Asia revenues by 2.1% despite “the increasingly competitive market for assurance services and the slowdown in economic growth across the region, and in China and India in particular.” In US dollars, Asia revenues contracted minus-0.6%, while revenues in Australia and the Pacific shrank minus-2.3%.
Growth in 2013 may be lackluster, but none of the Big Four is likely to step off the gas in Asia. “Our leading growth across many emerging markets is tied to the investments that have been made in our practices in these over the past decade – investments that we will increase in future years,” says John Ferraro, Global Chief Operating Officer at EY.
For his part, PricewaterhouseCoopers International Chairman Dennis M. Nally says PwC will  invest US$1 billion in the next three years, “with a particular emphasis on emerging markets.” Economic growth in Asia and other developing regions may be slowing, but it “continues to outpace expansion in the more established economies. We see some positive signs of sustainable recovery.”
Outlook 2014
That should put Deloitte on its toes, although the current market leader is not standing still either. Last year, it bought a majority share in strategy consulting company Monitor Group, which has more than 20 member firms in 14 countries. According to Deloitte, “acquisitions will remain a priority to [our] business strategy in 2014.”
PwC has responded by merging with strategy consulting firm Booz & Company, a deal expected to close in the first quarter of this year. Joe Saddi, Chairman of Booz & Company, says combining “our 99-year legacy of delivering high-impact, practical strategies” and PwC’s breadth and depth of capabilities and talent “will now allow us to bring strategies to life with seamless global delivery of strategy through execution.”
In other words, 2014 will likely see a steep jump in advisory revenues for PwC, even as Deloitte will seek to realize more synergies from Monitor and perhaps make new acquisitions. And while smaller than either Deloitte’s or PwC’s, the revenues of EY and KPMG are sizeable enough (at more than US$23 billion each) for them to go on the acquisition trail themselves.
It will take some time for EY and KPMG to catch up with the Big Two, but EY, in particular, seems to have the momentum at the moment to do so. This year and beyond, the key is how well they manage and grow their advisory business.
About the Author
Cesar Bacani is Editor-in-Chief of CFO Innovation.